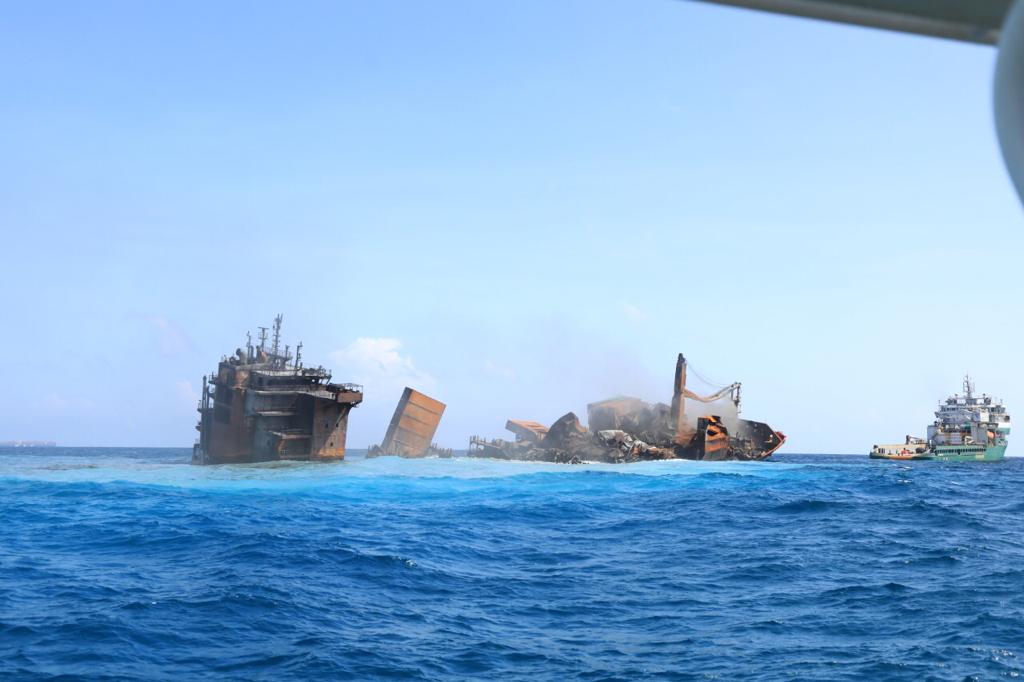 X-Press Feeders, former operators of the fire-stricken container ship X-Press Pearl, has revealed that the salvage operation to remove the vessel’s wreck will occur in four phases over two seasons. The vessel will be cut in two in order to remove it. All onsite operations are expected to be completed by April 2023.

The ship has since been resting on the seabed, with X-Press Feeders waiting for the Monsoon to pass for the salvage to be executed.

Phase one of the salvage operation already commenced in November 2021 and includes the removal of all container remains and cargo debris from water depths over 10 meters. That task is almost completed, with just two containers to be recovered within the next few weeks.

Meanwhile, the owners have contracted NARA (National Aquatic Resources Research and Development Agency) to survey the waters of less than 10 metres depth to identify if any incident-related debris can be detected and recovered. These works should take about four to five weeks and will begin shortly.

X-Press Pearl to be separated in two sections

To raise these two sections, 63 lifting wires will be installed underneath the wreck. Installation works, applying the Horizon Directional Drilling methodology, have already commenced. Salvors will also remove the accommodation block from the hull, with operations due to be suspended at the end of April 2022 for the onset of the southwest monsoon season.

Phase two will begin in November 2022 with the end of the monsoon season and will see the wreck split in two and preparations made to lift the wreck sections.

Raising of the wreck

Phase three will start in February 2023. The wreck sections will be raised between two lifting barges, applying a heave compensated strand jack methodology and placed onboard a semi-submersible vessel. The sections with the remaining cargo on board will then be transported to a certified decommissioning facility for further processing.

Finally, Phase four will see the complete dismantling, recycling, and disposal of the wreck sections and the standing down of all vessels and crews by September 2023.

The salvage teams will continue to be supported by response tugs on a 24-hour watch to deal with any form of pollutants that may be released during the entire recovery and salvage process, and regular water sampling will be ongoing at the site. Representatives from Sri Lanka’s Marine Environment Protection Authority will remain with the recovery crews signing off on their work as it progresses.

On the Sri Lankan beaches, Oil Spill Response Limited, a company specialising in pollution recovery, together with local resources, continue to be engaged in clearing the affected areas from the plastic nurdles and other debris related to the incident.

The vessel owner’s P&I insurers are still in discussions with the Sri Lankan government on a second compensation claim to help the local fishing community and others who have been impacted by the consequential costs of the fire and sinking of the vessel. In July, X-Press Feeders made an initial payment of USD 3.6 million.

X-Press Feeders says it continues to work with the Sri Lankan authorities towards the repatriation of the four remaining crew members who are currently housed at a hotel in Colombo. The company hopes they will be able to return home as soon as possible.

The first eleven seafarers of the container ship X-Press Pearl were able to go home in July, with another four having their travel ban lifted in December. The crew members have been in Colombo since being evacuated from the X-Press Pearl on 25 May.