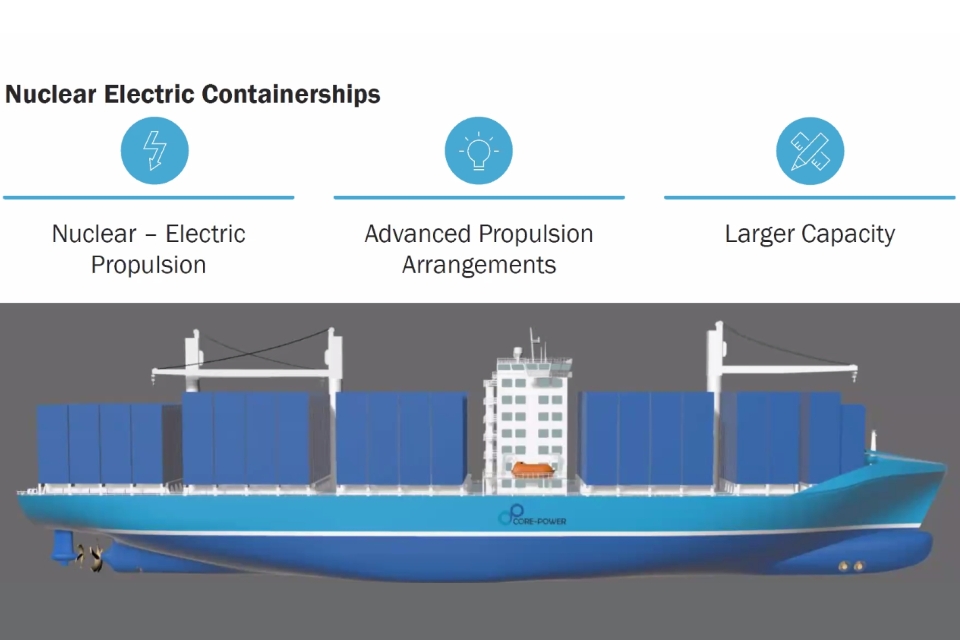 Nuclear could see the industry move away from the slow-steaming, 20,000-TEU sized container ships, to both fewer and much smaller and faster ships. A potentially disruptive technology, says Core Power, but also the only decarbonisation option that could actually make shipping cheaper when compared to the e-fuels currently being considered.

Container ships are among the largest, most powerful vessels and as such, they are responsible for the majority of shipping’s emissions, says Giulio Gennaro, Technical Director at Core Power. Over the years, their size has increased to well over 20,000 TEU and due to rising fuel cost, slow steaming has become common practice.

He adds that this market is now faced with ‘large uncertainties as to what the conventional fuels will be in the future. We see a lot of dual-fuel ships and a range of ammonia-ready ships for example, but we don’t know what the actual future will be.’ It is clear, however, that the new fuels will come at a price and that compliance with new regulations will only drive up the cost of shipping.

First of all, the major component of lifecycle cost for an MSR is the capital expenditure (CAPEX) of the propulsion system. This is markedly higher than any of the other fuel sources. So, they will be expensive ships to buy. However, it does represent, as Gennaro puts it, ‘a lifetime fuel inventory added overnight’.

Yet, the operational expenses (OPEX) of propulsion are driven by fuel cost, which are vastly reduced when using an MSR. Moreover, when carbon taxes will become the norm, the difference between HFO and VLSFO, which are now cheapest among the currently available fuels, will become bigger.

That is why Rory Megginson, Director of Analytics at Core Power, says that nuclear is the ‘only option that decarbonises and lowers cost’.

Gennaro calls the nuclear-powered container ship disruptive: ‘the MSR system takes up less space, has less weight, does not require fuel tanks and ships can sail faster, think 25 knots or more’. Such vessels ‘are not susceptible to slow steaming’. An MSR has a certain power output and is not subject to fuel cost savings, so sailing faster or slower makes no difference in terms of cost.

The need for slow steaming to suppress fuel cost and economies of scale have resulted in container ships of over 22,000 TEU. Not all ports can service these ships. But an MSR frees up more space for cargo and allows ships to sail much faster. That is why Core Power expects that nuclear-power can make smaller container ships competitive again.

According to Core Power, smaller vessels offer more flexibility in terms of the ports they can call at and since they sail faster, they can do more roundtrips a year than conventional vessels.

When asked whether it would also be possible to build 22,000 TEU ships that could sail at high speed powered by MSRs, Gennaro says that of course this would be possible, ‘but would it be economic’? If a ship is bigger and has to sail faster, it may need more MSRs instead of just one. Gennaro explains: ‘CAPEX changes with the required speeds and there are big jumps between designs. Fewer reactors are needed in smaller ships, while faster and larger ships need more.’ This may mean the CAPEX becomes exceptionally high for such a large version and a smaller vessel would be more economical.

CEO and Founder of Core Power, Mikal Boe, says getting the regulations in place to allow the safe use of MSRs on ships is still a challenge. He considers it a slow process, but also sees pressure from the public to meet climate targets increasing. There is a sense now of having ‘to get things done and governments need to make sure the nessary rules are in place’.

And he does see progress. In November, the UK will pass its Nuclear Maritime Law. The Regulations will transpose Chapter VIII in the Annex to the International Convention for Safety of Life at Sea, 1974 (SOLAS) together with the Safety Code for Nuclear Ships (res. A.491.XII) into UK law. ‘An important milestone in the regulatory progress for new nuclear in maritime,’ according to Boe.

Moreover, SOLAS VIII already covers nuclear propulsion albeit only the nuclear steam cycle, says Boe. So a proposal needs to be put to the International Maritime Organization (IMO) as according to Boe it concerns basically ‘a technical update of an old rule, a polish, and resistance to this is not really there.’