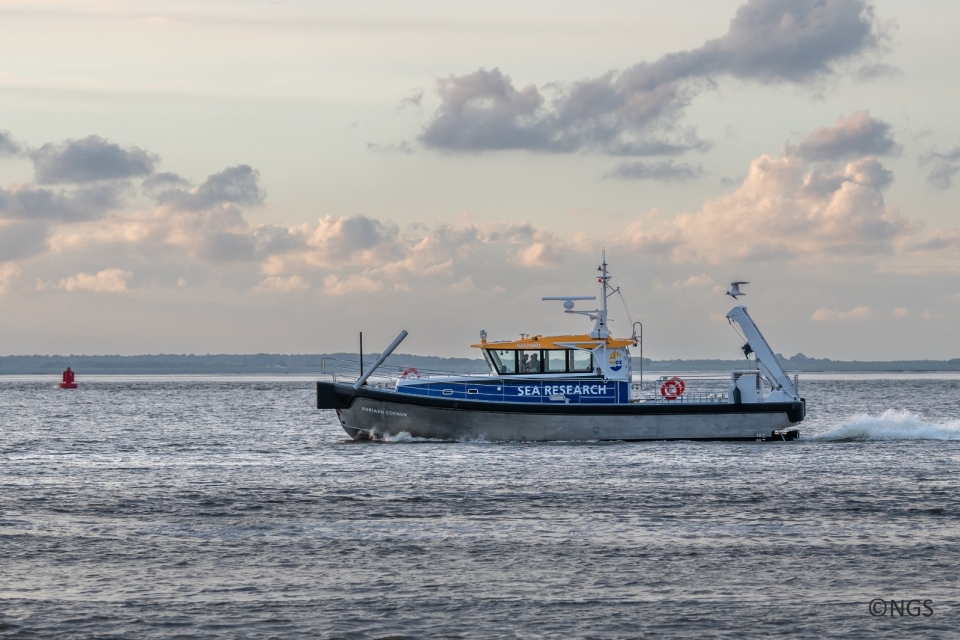 The Royal Netherlands Institute for Sea Research (NIOZ) on Texel has christened the first of its three new research vessels, the Adriaen Coenen. It is the smallest ship in the new research fleet and replaces the RV Stern.

The vessel was christened at Next Generation (NG) Shipyards in Lauwersoog, where the vessel was built, on Wednesday, 6 July. The Adriaen Coenen will operate from the NIOZ home port on Dutch Wadden Island Texel.

‘With this Wadden Sea vessel, research will be conducted from climate change to biodiversity,’ says Director of NIOZ, Han Dolman. ‘We paid close attention to the most climate-friendly construction and energy consumption.’

Albert Keizer, director of NG Shipyards, adds: ‘The ship was built with solar energy, it sails on a biofuel, and the AdBlue system on the exhaust limits nitrogen emissions.’

The RV Adriaen Coenen features work spaces for two crew members and twelve passengers, including scientists, assistants, and other guests. Its shallow draught of 85 centimetres allows the vessel to pass the slack waters at high tide and beach itself on the sandbars.

The new vessel can also be used for minor push- and tug work, for example to help move the mobile “Wadtoren” bird observation platform. The boat is equipped with wet and dry laboratories, ICT infrastructure, communications equipment, cranes and a spacious working deck with room for two rubber boats or a 10-foot container.

Skipper Wim Jan Boon: ‘It is a quiet ship, which is very pleasant for crew, researchers and the environment. Because the computer automatically keeps the ship in the desired position during research, I can work more efficiently.’

Feico Hoogeveen from NAVIS was responsible for supervising the construction, together with a project support team. ‘The hull of the Adriaen Coenen was designed to take advantage of CFD (Computational Fluid Dynamics) simulations to optimise its hydrodynamic characteristics. The propulsion system uses hydrojets to allow the vessel to operate in shallow water and to beach itself without causing damage to the propellers.’

He continues: ‘The energy is provided by HVO (Hydro-treated Vegetable Oil), a biological diesel replacement. That provides a major reduction in emissions: ninety per cent less fossil CO2 released into the atmosphere. When combined with particle filters and a catalytic converter, the system is at least equivalent to the emissions reduction achieved by using methanol. And the AdBlue system fitted to the exhaust also provides a significant reduction in nitrogen emissions. All of the installations were designed to use as little energy as possible. The coolant water system, for example, includes a thermal transfer unit. The LED lighting are controlled by movement sensors and powered by solar panels. The vessel is also fitted with as much thermal insulation as possible to keep energy consumption for heating to a minimum.’

The fifty-year-old RV Stern will be sold to NG Shipyards.

The replacement of the RV Navicula will be called the RV Wim Wolff, which will be certified for the open ocean with some restrictions with respect to the sailing area. The Wim Wolff will be outfitted at the Thecla Bodewes Shipyard in Harlingen and the hull sections of aluminium are being built by Dutch companies N. Dijkstra Metaalbewerking in Harlingen and by Alubouw Fryslan. The superstructure sections are built by KB in Makkum, the Netherlands. N. Dijkstra Metaalbewerking is also responsible for the hull assembly.

The ocean-going RV Anna Weber-van Bosse is the intended replacement for the current flagship RV Pelagia. The construction of this vessel is under preparation. Prelimenary tender documents have been received and negotiations with the different shipyards are ongoing.

Just before the final date of the tender, one of the potentially bidding shipyards filed for summary judgment about the contract conditions requested in the tender.

On 14 April 2022, the court ruled that a number of points in the contract must be amended so that there can be no misunderstandings about the interpretation. This adjustment will take place in the short term and a final tender will be submitted based on these new contract conditions. This is expected to lead to a total delay of three to four months in the tendering process, also due to the summer holiday period. Therefore, the outcome of the tender is expected to follow shortly after the summer.

Picture: Trial tests on the Wadden Sea (by NG Shipyards).