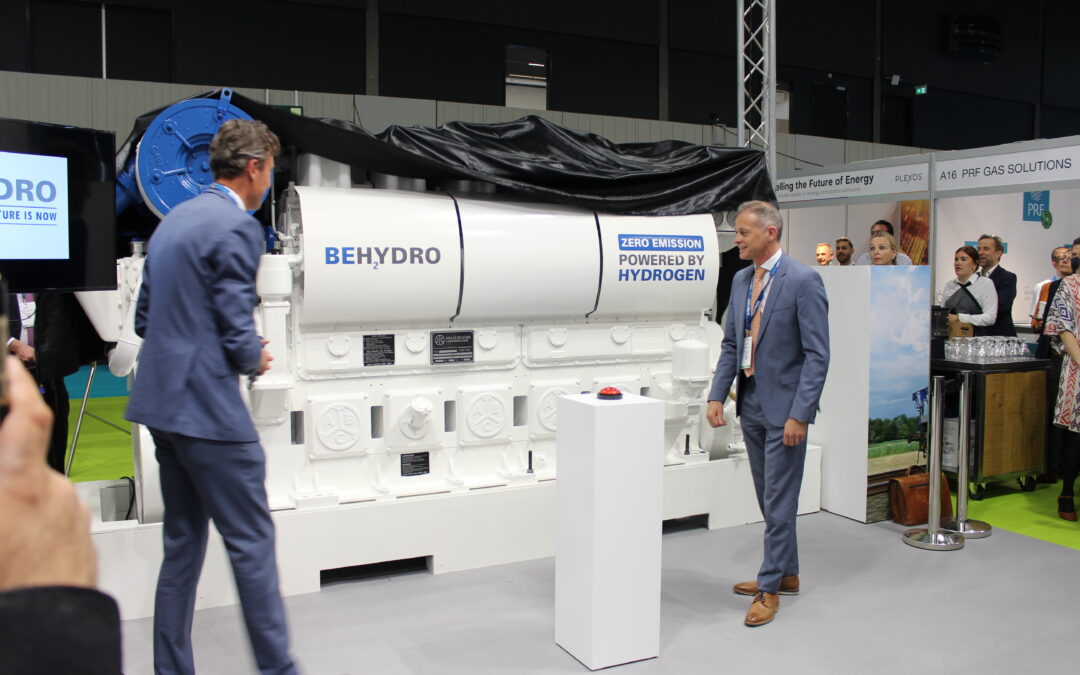 The engine was presented at the World Hydrogen Summit & Exhibition, held in Rotterdam Ahoy from 9 to 11 May. This article – by maritime journalist Hans Heynen (pictured ->) and published in SWZ|Maritime’s June 2022 issue – describes the monofuel hydrogen engine in detail.

Although based on ABC’s DZC diesel engine, the BeH2ydro monofuel engine is a low-pressure Otto engine with a sparkplug ignition. Like the DZC, it will become available in six and eight-cylinder line versions and in twelve and sixteen-cylinder V versions. With a power range from 1000 to 2670 kW, the BeH2ydro engine is less powerful than the DZC diesel engine (1326 kW to 3526 kW).

‘The engine can be used in harbour tugs, inland vessels, coasters, locomotives, and generators,’ says Alexander Saverys, chief executive officer (CEO) of the Antwerp based Compagnie Maritime Belge (CMB), at the presentation. ‘With this technology, combustion engines can continue for another 100 years without any after treatment system. In our vision, this engine has a lot of potential for many applications. With 67 kilos of hydrogen per MWh, it is even a bit more efficient than the diesel engine that uses 190 kilos per MWh.’

Ir. Tom Berckmoes, CEO of Ghent-based ABC, explains how this weight difference is possible: ‘Hydrogen holds almost three times as much energy per kilo as diesel fuel. However, because hydrogen is exceptionally light, the volume of a kilo of hydrogen is much bigger.’

Because of the volume difference and the necessity to create a hydrogen bunker structure, chief technology officer (CTO) Roy Campe of CMB spin-off CMB.Tech sees harbour tugs, inland ships and locomotives among the first to swich to hydrogen. ‘We expect the energy transition to start in harbour areas with more than 10,000 tugboats in operation worldwide. In ports, you see a concentration of heavy-duty equipment that is very difficult to electrify. Not only on the shipping side, but also on the land side. We will develop powerful hydrogen solutions for both sides.’

CMB.Tech believes that after the port vessels, inland barges will be converted to hydrogen. ‘Harbour tugs can bunker daily and inland barges can carry hydrogen in special containers that can easily be swapped. When more ports build hydrogen infrastructures, it will also become possible for coastal vessels to convert to hydrogen. On these ships, the accommodation will move to the front. Hydrogen containers can then be placed directly above the engine room. Empty containers will be swapped for full ones when a coaster enters a port,’ explains Campe, who also sees possibilities for vessels in the offshore wind sector.

The ABC engine blocks of the BeH2ydro engines are the same as the engine blocks of the ABC diesel engines in the maritime and railroad sector. ‘In Belgium alone, 170 locomotives use these engines,’ says Campe. ‘They have the same footprint and can easily be swapped. Apart from a hydrogen tank and an extra hydrogen wagon behind the locomotive, everything can stay the same. That also applies to inland vessels with ABC engines. This makes conversion to hydrogen easy.’ Campe sees the use of hydrogen powered generators on the quay as a solution for clean electricity for large ships in port.

ABC and CMB.Tech have tested the hydrogen engine extensively.

‘We looked at the effect of different valve timings, different turbo pressures and different compression ranges with a full-scale monofuel hydrogen engine,’ says Campe. ‘It was the first time in over 100 years that ABC constructed an Otto engine with spark ignition. You can see the difference with the diesel engine in the piston we used. We replaced the typical diesel piston with the Mexican hat shaped combustion chamber by a piston with a hollow shaped combustion chamber. As CMB is a large shipowner, we developed the engine in the first place for maritime use.’

According to Berckmoes, the hydrogen engine meets IMO Tier III and EU Stage V emission requirements without any after treatment. ‘Therefore, inland shipping is absolutely a sector that qualifies for this engine. Infrastructure for hydrogen will first become available in ports and with the EU Stage V legislation, inland waterway diesel engines require complex and expensive emission systems. You do not need that with this engine and there will be no CO2 penalties in the future. Your CO2 emission is zero, you have no particles, no sulphur and virtually no NOX emissions.’

He adds: ‘You would expect the latter with an internal combustion engine, but we have tested this extensively. It is a low-pressure engine with such a large excess of air in the cylinders that practically no NOX is formed during combustion. Without any after treatment, the NOX and particle emissions stay well under the limits. That also means that the low-ash oil used stays clean longer.’

In the monofuel engine, the hydrogen gas mixes with the combustion air via injectors near the intake ports. The hydrogen is injected per cylinder under low pressure via a common rail system. ‘In the combustion chamber, the air/hydrogen mixture is ignited via a classic spark ignition system’, explains Berckmoes. ‘The engine can start, stop, and run for extended periods of time at partial load without any problems. The injection pressure of the hydrogen lies one bar above the overpressure of the turbo. When the turbo pressure is 2 bar, the hydrogen injection pressure will be 3 bar.’

Compared with the diesel engine, the reactivity of the hydrogen engine is a little lower. ‘The hydrogen engine goes from zero to full load in forty seconds,’ Berckmoes continues. ‘A diesel engine will do this in about twenty seconds. But the propulsion engine of an inland vessel or a coaster must not accelerate too fast from zero to full load, so that is not a problem.’

According to Berckmoes, a hydrogen engine can easily compete with a fuel cell system. ‘The investment per kW is much lower for an internal combustion engine and under full load, the efficiency of a hydrogen engine is slightly higher than a fuel cell’s. A fuel cell has a slightly higher efficiency under partial load. However, our engine has an expected lifetime of 150,000 hours and will digest impurities in hydrogen well. The engines can even be used to burn waste hydrogen instead of flaring it. Fuel cells need 99.9 per cent pure hydrogen and become less efficient after 30,000 hours. Final advantage is the simplicity of the internal combustion engine and the worldwide knowledge of it.’
Berckmoes admits that pricewise, hydrogen cannot compete with fossil fuels yet. ‘But in the future, it might well be the most economic CO2 neutral fuel.’

The first monofuel BeH2ydro engine has already been ordered. It will be installed on a Norwegian coaster in combination with a rotor sail system.

Earlier, BeH2ydro developed a medium-speed hydrogen dual-fuel engine based on the AZC engines from ABC. This high-pressure engine was presented in October 2020 and can run for 85 per cent on hydrogen.

‘Advantage of a dual-fuel engine is that you can switch to diesel fuel when hydrogen is not available,’ says Berckmoes. ‘The first dual-fuel BeH2ydro engines (2 MW each) will be placed in a harbour tug that will be operational in the port of Antwerp by the end of this year or the beginning of 2023.’

CMB.Tech also developed lighter, fast running dual-fuel hydrogen engines, based on the Volvo-Penta D13. The first one has been installed on a Japanese passenger ferry that CMB Technologies built with Tsuneishi Facilities & Craft (TFC) in Onomichi. With Japanese partners, CMB.Tech is also building a hydrogen harbour tug for Japan.

‘Japan is the cradle of hydrogen,’ says Campe. ‘Our partners are very enthusiastic to introduce these engines in Japan, where they are marketed under the name Japan Hydro.’

In Rotterdam, on 10 May, CMD.Tech presented, in cooperation with Windcat Workboat, a hydrogen-powered Crew Transfer Vessel (CTV). This “Hydrocat 48” is now operational. It has two dual-fuel hydrogen engines, based on modified MAN dual-fuel LNG MK3.5 engines. CMB.Tech retrofitted the engines with its hydrogen injection system. They can run eighty per cent on hydrogen.

‘This vessel offers the wind industry a cost-effective solution to significantly reduce emissions from service vessels, which can be applied to any wind farm today,’ said managing director Willem van der Wel of Windcat Workboats. ‘This solution can be seen as a steppingstone to fully hydrogen powered CTVs. By starting with dual-fuel combustion engines, we can make hydrogen technology operational in the industry and kick-start further development of the technology, regulations, and supply chain.’