Nautical Institute: Early action is not limited to course alterations 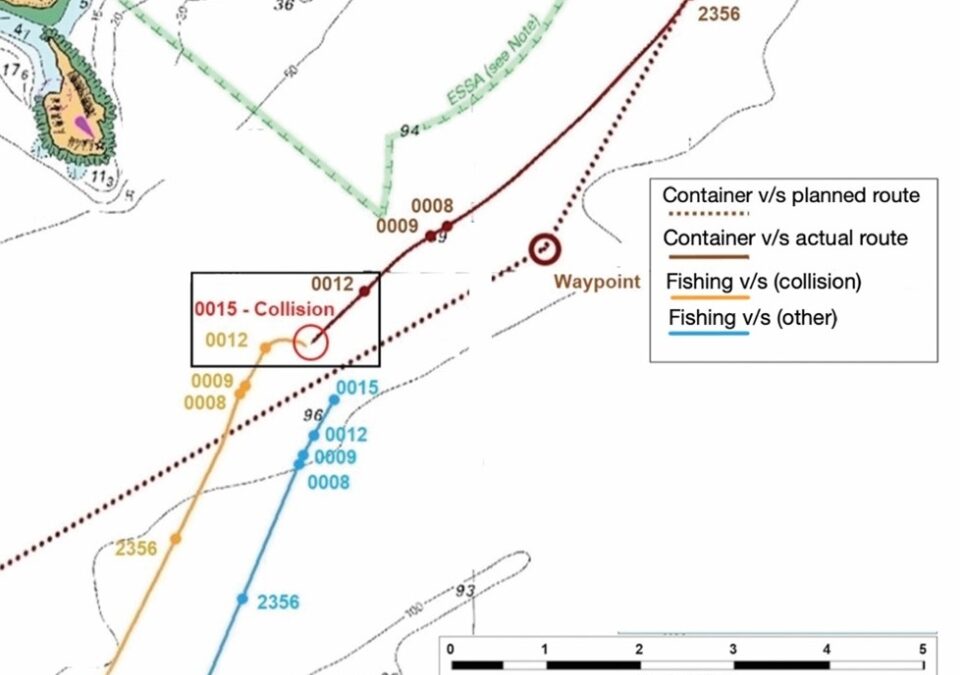 When there is a risk of a possible collision, it is always a good idea to slow down to give both vessels more time to act on the situation. The Nautical Institute gives this advice in its latest Mars Report, which describes a collision between a container ship and fishing vessel.

Underway in darkness, the officer of the watch (OOW) on a medium-sized fishing boat sighted the masthead lights and green sidelight of an approaching container ship fine on the starboard bow. The ship was also detected on radar, but was not acquired for tracking at that time.

Meanwhile on the container ship, the OOW visually sighted and later acquired on radar two approaching vessels on the starboard bow, one of which was the fishing vessel. The vessels were about 10 nm from the container vessel. The OOW continued to monitor the two vessels, both visually and by radar, while making small adjustments to the heading to maintain the ship on the planned track.

At about 2356, and over the next ten minutes, the OOW made a succession of small heading alterations that took the ship to starboard in a “corner cutting” manoeuvre. The next planned course alteration would be to starboard and there was no danger in leaving the current course line.

Meanwhile, the watch had changed on the fishing vessel. The new OOW quickly acquired the container vessel on the radar. The ship was now about 6.5 nm away on a south-westerly course with a speed of about 17.5 knots. When the container vessel was now about 4 nm away, the fishing vessel’s OOW walked the short distance to the trawler’s bow to better assess the situation. He sighted the oncoming container vessel fine on the starboard bow with the ship’s two masthead lights nearly in a line. He returned to the wheelhouse and continued to monitor the approaching ship visually and by radar while maintaining his vessel’s course and speed.

Notwithstanding all of these last minute manoeuvres, the two vessels collided with the trawler’s port bow impacting the container vessel’s starboard side. As the trawler then scraped down the container vessel’s side, the skipper stopped the engine and the crew mustered in the wheelhouse. The trawler heeled over sharply to starboard and took on some water before it righted itself, passed the ship’s stern and drifted away to the north-east.

Picture: This schematic overview shows the course alterations of the container ship and fishing vessel before they collided.

This accident was covered in the Mars Reports, originally published as Mars 202218, that are part of Report Number 355. A selection of this Report was also published in SWZ|Maritime’s June 2022 issue. The Nautical Institute compiles these reports to help prevent maritime accidents. That is why they are also published on SWZ|Maritime’s website.