Not reducing speed in fog leeds to vessel collision 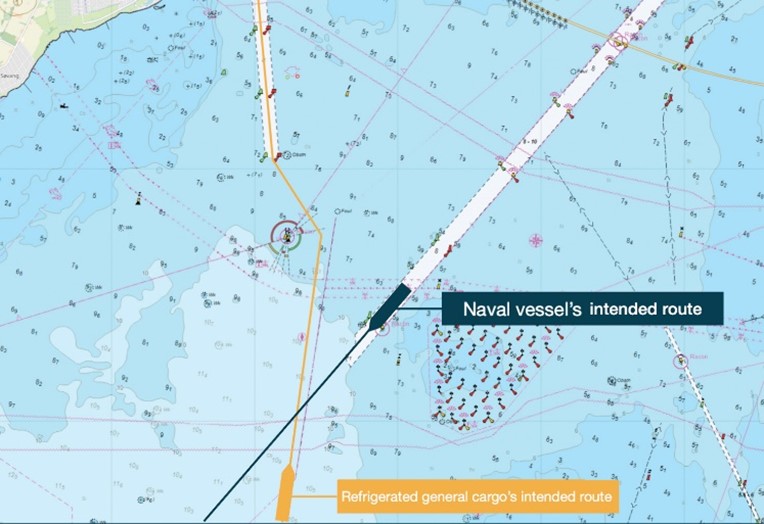 When ships are on a collision course, the first step should be reducing speed to give more time to assess the situation and/or increase the closest point of approach. The Nautical Institute gives this warning in its latest Mars Report which describes how a general cargo vessel collided with a naval vessel.

A refrigerated general cargo vessel was underway in a coastal area. When the visibility decreased to less than one nautical mile, the speed was reduced to 14 knots and steering was undertaken manually by a helmsman, with the master and officer of the watch (OOW) also on the bridge.

Half an hour later, the master and OOW noticed a vessel on the radar, which was not transmitting an AIS signal. As the vessel crossed ahead from starboard at a distance of approximately one nautical mile, they noticed that it was a naval vessel. The master observed it visually from the windows on the port side while trying to assess the visibility. The visibility then decreased to about 50 metres.

The OOW now observed another vessel on the radar approaching from starboard. He voiced his observation, and the master went back to the radar. This vessel, like the previous one, was also not transmitting an AIS signal and the OOW plotted it on the radar. It quickly became apparent to the bridge team that their vessel and the target vessel were on a collision course.

The master knew he needed to take action, but did not want to turn hard to starboard because he was concerned they would collide with the approaching vessel. Additionally, the vessel had a draught of 7.1 metres, and the 10-metre depth contour was only 0.3-0.5 nautical mile to starboard.

On the other hand, he did not want to turn to port because that would not resolve the situation in the event that the other vessel altered course to starboard. The master gave orders to activate the sound signal. The visibility was now close to zero and the approaching vessel was still not visible. Unsure of the other vessel’s course and intentions, the master decided to attempt to increase the closest point of approach (CPA) by ordering a course change a few degrees to starboard.

The other vessel did not change its course, and the small course alteration did not have any effect. He then told the helmsman to alter the course a few degrees to port.

Shortly afterward, the other vessel appeared abeam and slammed into their starboard side. The master and OOW saw that this was another naval vessel similar to the one that had passed ahead a few minutes earlier.

Shortly after the collision, the cargo vessel dropped anchor to better assess the situation. The damage incurred was above the waterline and there was no risk of pollution. In the meantime, the naval vessel was adrift and was assisted by the other naval vessel, which had returned to the area.

The official investigation found, among other things, that several coinciding factors contributed to the bridge team not recognising the risk of collision until the naval vessel was at close quarters. These included the layout of the bridge, the configuration of the X-band radar and the division of work between the master and OOW. The investigation was not able to determine the sequence of events on the naval vessel.

This accident was covered in the Mars Reports, originally published as Mars 202151, that are part of Report Number 348. A selection of this Report will also be published in SWZ|Maritime’s November 2021 issue. The Nautical Institute compiles these reports to help prevent maritime accidents. That is why they are also published on SWZ|Maritime’s website.