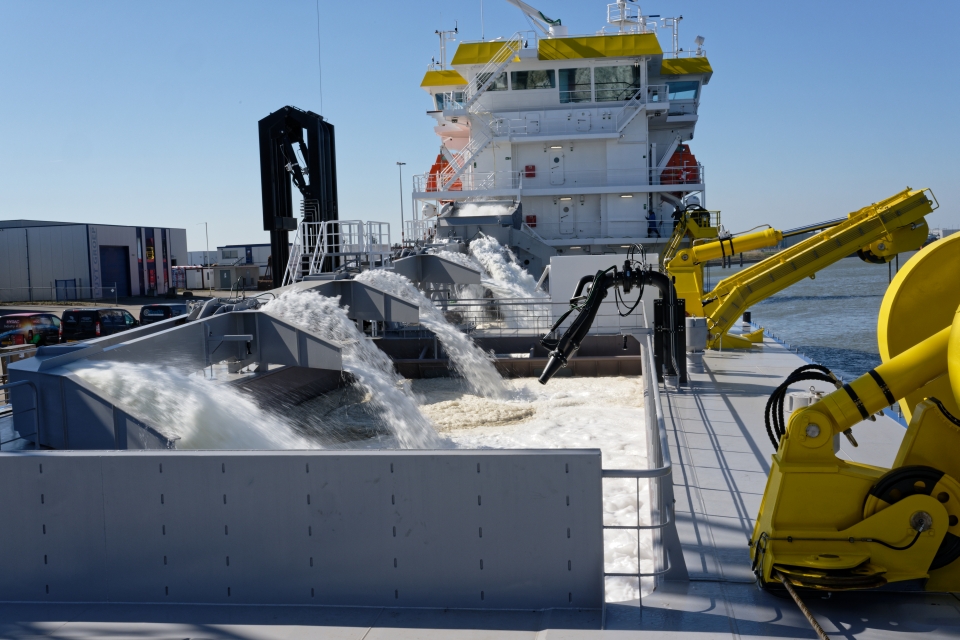 Systems integrator Alewijnse has completed the comprehensive electrical and automation installation on board the newbuild trailing suction hopper dredger (TSHD) Krakesandt. The innovative vessel is one of the only diesel-electric TSHDs that specialises in sand and gravel extraction at sea.

The Krakesandt is the second advanced dredging project that Alewijnse has undertaken for Thecla Bodewes Shipyards for its client De Hoop Terneuzen. The first was the Krakesandt’s sister vessel, Anchorage.

The Krakesandt, named after a sandbank off the coast of Cadzand first mentioned in the fourteenth century, has been built entirely in the Netherlands. The vessel has a length of 105.90 metres, is 15.85 metres wide and has a draught of 6.94 metres.

Designed to dredge sand and gravel aggregates from the seabed, the energy efficient vessel has a single suction arm and a storage capacity of 3000 m3. In addition to enabling smart power management, the use of electric propulsion increases propeller efficiency during dredging, sailing and manoeuvring, which in turn optimises energy and fuel consumption and reduces emissions.

For the control and monitoring of the dredging process, Barkmeijer Shipyards, part of Thecla Bodewes, has collaborated with Alewijnse to develop an intelligent and integrated bus-driven system. In addition to delivering high dredging performance, its capabilities mean that a crew of just seven or eight is required to manage, load and unload the vessel.

This ground-breaking system is now being made available to other clients via Alewijnse. Elsewhere on board, the diesel-electric power plants, delivered by D&A Electric, significantly reduce energy consumption and emissions.

Several other advanced automation systems are also being integrated on board. These include an alarm and monitoring system (AMS) for fire door monitoring and remote tank sounding, and a bridge operating system (BOS) for the control and monitoring of the lighting systems.

Also being fitted is a dredge control system (DCS) for the control and monitoring of the remote controlled dredging valves, position indication and control of the swell compensator, overflow, pumps, screen/hopper loading system and the onboard hydraulics. A ship system control (SSC) has also been specified for control and monitoring of the trim valves.

Alewijnse is also installing its in-house draught and loading system (ADLS) for continuous measurement of the equipment’s depth and the calculation of the actual load, trim and list. The Alewijnse suction tube system (ASTS) combines software and hardware for the measurement, calculation, visualisation and monitoring of the hopper dredger’s suction tube position under water.

Alewijnse and Thecla Bodewes have been working together successfully for more than forty years. Earlier projects with Thecla Bodewes and its subsidiary Barkmeijer include the joint delivery of the German Wadden ferry Adler Rüm Hart, hopper dredgers UKD Orca (2010) and Charlock (2016) and three pilot station vessels built for the Dutch Pilots’ Organisation; the Polaris, Pollux and Procyon (2012-2014).