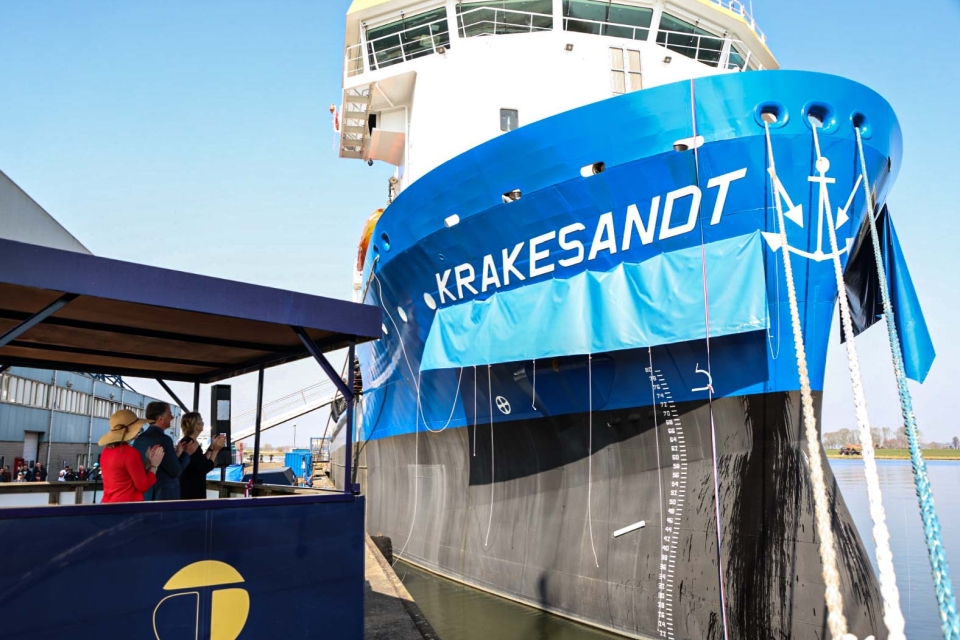 Thecla Bodewes Shipyards has launched the 105-metre trailing suction hopper dredger Krakesandt at its yard in Kampen, the Netherlands. It is the second energy-efficient dredger that the yard is building for De Hoop Terneuzen BV.

The launch took place on Thursday 24 March. The Krakesandt was christened by Mrs. Sabien Binkhorst.

The modern dredger is equipped with a smart diesel-electric system, developed in close collaboration between Thecla Bodewes Shipyards and D&A Electric, which efficiently regulates the energy supply for sailing, dredging and unloading of the ship. In addition to smart and stable power management, the use of the E-prop electric propulsion increases the overall propeller efficiency during dredging, sailing and manoeuvring, optimising energy and fuel consumption and greatly reducing the ship’s emissions.

The hull shape is optimised for sailing with both loaded and unloaded draughts by means of Computional Fluid Dynamics calculations. The trailing suction hopper dredger is – just like the successful sister ship Anchorage that was delivered to De Hoop Terneuzen last year – ready for the future by applying this sustainable and state-of-the-art propulsion technology.

The dredger was designed and built to extract sand from the North Sea, which is used as a raw material in the concrete industry and road and house construction. The ship is equipped with two large open holds, the hoppers, which allows loading of different mixtures. In the North Sea, about 25 km from the coast, these hoppers are filled up with a sand pump and a drag head that drags over the bottom like a kind of vacuum cleaner.

When the hopper is full, the sand from the large dredger is transferred to inland vessels. A special wet discharge installation has been designed and built for this purpose. In order to get the sand out of the hoppers, the sand is liquefied from the bottom up through drainage pipes integrated into the floor of the hold.

When the hold is almost empty, there is also a manipulable water cannon ready to spray the last remaining remnants of sand from the corners so that that too can be loaded into the barge.

A special feature is that the loading arm can follow the movement of the inland vessel. Because during loading the inland vessel gets deeper and deeper and the hopper dredger less and less deep, the skipper does not have to do anything and the cargo can be transferred quickly and efficiently so that the hopper dredger can start the next journey without having been in port.

BN348 has a length of 105.90 metres, is 15.85 metres wide and has a draft of 6.94 metres. On board is spacious and comfortable accommodation for fourteen crew members.

The modern, intelligent dredger was built entirely in the Netherlands in collaboration with Dutch suppliers. Like sister ship Anchorage, the ship was designed by Barkmeijer Shipyards – part of the Thecla Bodewes Shipyards group and built at Thecla Bodewes Shipyards in Kampen. Client De Hoop Terneuzen BV is a major supplier of building materials in Holland and Belgium.

After Easter, BN48 Krakesandt will go from the yard in Kampen to Thecla Bodewes Shipyards in Harlingen, from where the sea and dredging trials will take place. The ship will strengthen the fleet of De Hoop Terneuzen at the end of May, 2022.