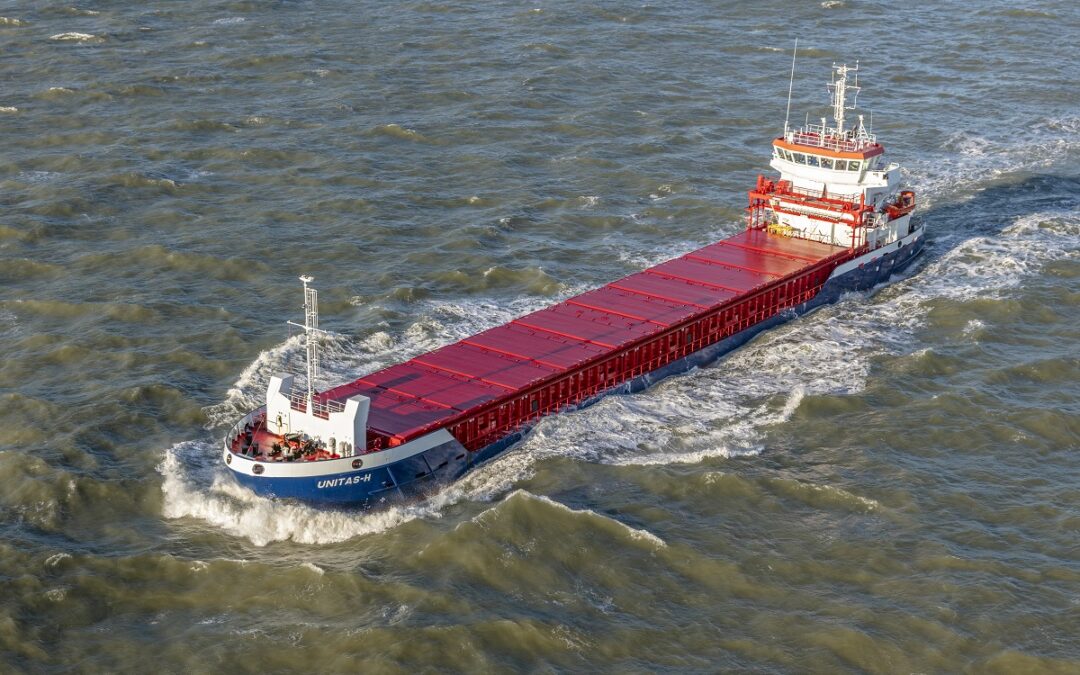 German ship owner Blue Fin Shipping has ordered an additional four Combi Freighters 3850 from Damen Shipyards to be delivered in 2022 and 2023. Before that, the company had ordered two that are already in operation.

The two new vessels Unitas-H and Solitas-H are already in full operation in typical European shortsea trades, transporting a variety of cargoes like steel, woodpulp, grain, fertiliser in bulk or in big bags. These are the first two operational CF 3850 vessels built to the new and improved design from Damen.

The first ordered CF 3850 Unitas-H, contracted in late 2020, was delivered to Blue Fin Shipping within six weeks from signing the order, from stock at Damen Shipyards Yichang in China on January 4th of 2021. The owner arranged a crew (challenged by Covid restrictions) and the vessel sailed for Malaysia where it took on cargo and departed for Rotterdam.

Throughout the voyage from China to Rotterdam the owner and Damen monitored the vessel with regard to its fuel consumption, speed and weather conditions. Analysis of the data confirmed that the vessel’s fuel consumption had not only improved significantly compared to the older designs, but that it also had done so while maintaining a very acceptable sustained speed in the face of head winds and seas while fully loaded.

The owner was so pleased with the results that shortly after the arrival at the North Sea port, a contract was signed for the second vessel of the same design, this one to be named Solitas-H. This second vessel was delivered from stock August 21st that same year.

‘The vessel is fulfilling its expected performance in fuel consumption and quality, even in rough seas,’ CEO Peter Hinsch from Blue Fin Shipping confirms. Peter Hinsch is also owner of Reederei Hinsch that is a shareholder in Blue Fin Shipping. ‘Charterers are happy with reduced fuel consumption. We were happy with the size of the vessel and its hold on the previous versions of the CF 3850. This has not changed in the new design.’

Damen is continuously improving the design of the yard group’s best selling freighter model CF3850. The current optimisation materialises a big step forward with a focus on lowering emissions and reducing fuel consumption. This has been achieved through the optimisation of the hull lines and introducing new efficiencies in the way that energy is used on board.

The specification of the design has been brought up to the latest standards with regard to the regulations governing ballast water treatment, Tier III NOx emissions and other recently mandated operational requirements. These modifications have resulted in notable improvements in its rating at the Energy Efficiency Design Index (EEDI), and at the Environmental Ship Index (ESI).

While the dimensions and tonnage of the new CF 3850 are similar to those of its predecessor, the re-design has enabled reduction of its installed main engine power from 1520 kW to 1104kW as the power needed to propel it at 10 knots fully laden has dropped more than equivalent of the power reduction. Damen Shipyards Group has delivered more than eighty vessels of this type since it was first introduced.

‘The M/V Solitas-H design is state of the art. The low consumption, the tween-deck and excellent stability are ideal for our trade,’ says Ronnie Hulstrøm, CEO of Baltic Shipping Company A/S who are chartering the Solitas-H and are also eager to see the newbuilds coming.