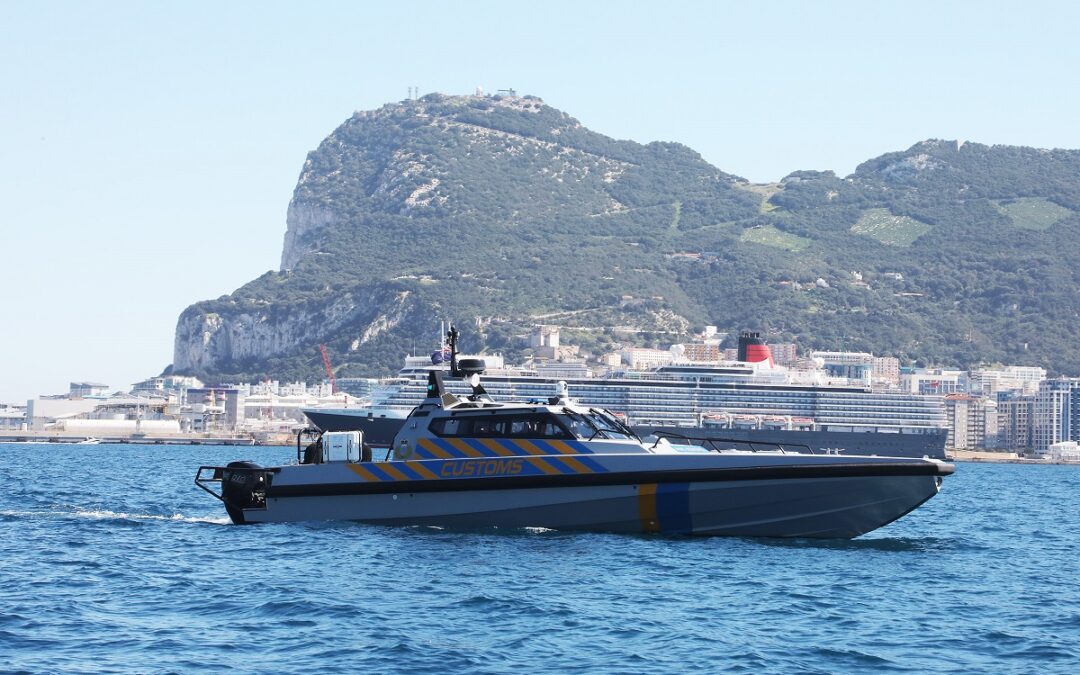 Gibraltar’s Chief Minister, Fabian Picardo, officially commissioned HMC Sentinel for duty in British Gibraltar Territorial Waters on March 2nd. HMC Sentinel is a Damen Interceptor 1503 FRP and is a custom-built prototype, the first of its kind. It is the result of a three-year project with extensive co-operation between Damen Shipyards and HM Customs.

The vessel was presented by Acting Collector of Customs John Payas, before receiving a blessing from Monsignor Azzopardi in the presence of the Chief Minister and HE the Governor Sir David Steel.

Damen incorporated specific wishes for performance and equipment into the design, resulting in an impressively expedient patrol boat.

14.5 metres in overall length, the Interceptor 1503 FRP can carry five crew and ten to twelve passengers. With a top speed of 62.5 knots powered by four Mercury Verado 400 R outboard engines, it is believed to be the fastest vessel in the bay of Gibraltar. It is the largest and most capable vessel ever commissioned into service with HM Customs Gibraltar. The vessel is 3.5 metres wide and has a draught of 0.9 metres.

The vessel’s hull and superstructure are composed of e-glass and carbon reinforced epoxy. The hull shape has a deep-V bottom without steps, for excellent seakeeping and manoeuvrability.

The interior accommodation features Ullman Atlantic Shock absorber seats, a stretcher and toilet and galley facilities to support long shifts at sea. HMC Sentinel is fitted with the latest in nautical and communication equipment, including fixed and portable searchlights, radar and GPS.

‘I am extremely proud to present HMC Sentinel, which represents a new phase in the development of HM Customs’ maritime operations in terms of capability and operability,’ says John Payas, the Gibraltar Collector of Customs. ‘Her high speed, enclosed cabin and robustness afford enhanced protection to our officers whilst carrying out their duties in the often volatile and challenging environment that are the British Gibraltar Territorial Waters. Furthermore, her on board amenities allow for greater comfort affording longer patrol times and increased presence.’