Gasunie, HES and Vopak to develop import terminal for hydrogen carrier in Rotterdam 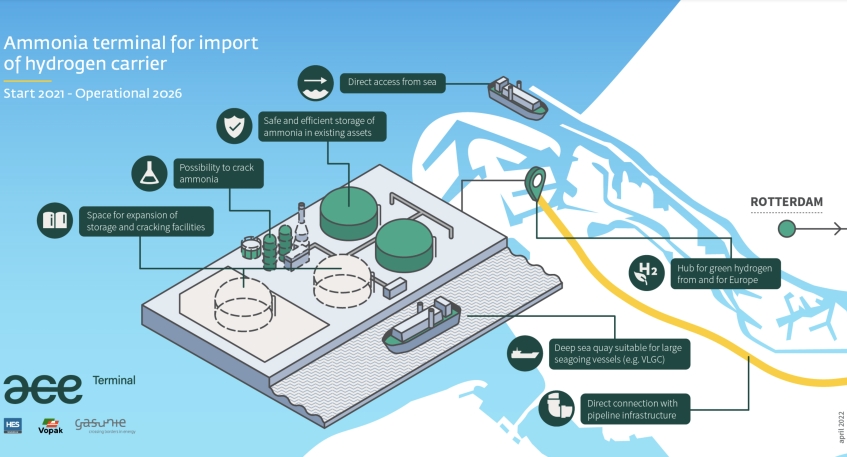 Gasunie, HES International and Vopak will be working together to develop an import terminal for green ammonia as a hydrogen carrier. The terminal, that will operate on the Maasvlakte in the Port of Rotterdam under the name ACE Terminal, will be operational from 2026.

The companies have signed a cooperation agreement to that effect. The cooperation is a response to growing global demand for the import and storage of green energy. This quarter, work will be started on the basic design of the import terminal.

Green hydrogen is seen as an essential element of the future renewable energy mix. Demand for green hydrogen is growing in the energy sector, the transport sector and the petrochemical industry, both in the Netherlands and Germany. An import terminal for green ammonia will make a vital contribution to the import of hydrogen, alongside hydrogen production, transport and storage. A reliable logistic chain is essential for developing the market for green hydrogen and for achieving the climate goals for 2030 and 2050.

At the intended location on Port of Rotterdam’s Maasvlakte, vessels from all over the world can moor to discharge green ammonia, and in the initial phase possibly also blue ammonia. Use can be made of the existing infrastructure and the logistic facilities of the Port of Rotterdam.

The site offers space for the development of an installation for converting ammonia into hydrogen. In the future, this installation will be connected to the national hydrogen network of Gasunie, that can serve the future hydrogen market in Northwestern Europe.

On the Maasvlakte, HES operates a strategic location with quayside capacity and direct access from the sea. Gasunie has at this location infrastructure of existing storage tanks and a system of pipelines. Vopak, with six ammonia terminals around the world, has extensive experience in the safe storage of ammonia.

By joining forces, an attractive starting point will be established from which within just a few years, the partners will be able to realise the import location for green ammonia in Rotterdam. The eventual investment decision still has to be taken, and will be based among others on customer contracts and the necessary permits, including the EIA procedure.

The service proposition will entail an independent open access terminal infrastructure, in which the partners will not own the green ammonia. A market consultation procedure is soon to be launched, in which interested parties can announce their interest in the supply, storage and transhipment of green ammonia and hydrogen. Initial discussions are already underway with international market parties.