Port of Rotterdam to pilot mobile shore-based power on hydrogen 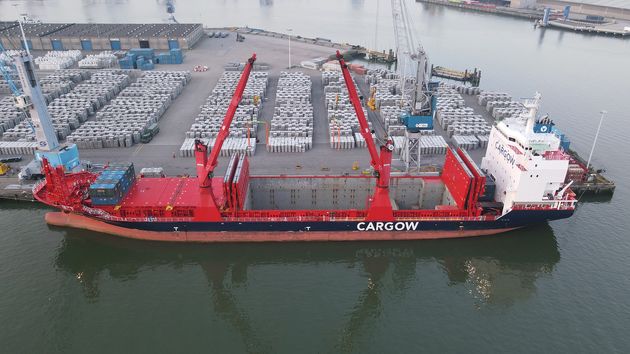 The Port of Rotterdam will begin a pilot in late 2022 with a mobile facility for shore-based power on hydrogen. The facility will be located at C. Steinweg-Handelsveem BV Beatrix terminal in the Eemhaven area near Rotterdam to supply Cargow’s multi-purpose vessels arriving twice a week.

The tendering process starts in February. The pilot is meant to intensify the use of shore-based power in the port and is part of a partnership between the Municipality of Rotterdam and the Port of Rotterdam Authority.

The collaboration began in December 2019, when a pilot was launched at Parkkade for supplying small sea-going vessels with electricity from the quay, or shore power. Thanks to this method, the crew will no longer need to run the on-board diesel generators, resulting in reduced air pollution and noise.

During the pilot, several marketable concepts were put through real-world tests over a five-month period. Power consumption data was collected, and emissions and sound levels were measured. The pilot showed it is technically feasible to supply sea-going vessels with shore-based power using mobile concepts.

The findings are being used to develop a permanent connection at Lloydkade as well as one at Parkkade later on. These findings are also a reason for the trialling of mobile shore power at the Steinweg location Beatrixhaven to start soon.

In most original terminal designs, the integration of any existing or future shore power has not been taken into account. Cranes, crane tracks and bollards nearby often impede the installation of equipment and cabinets for shore-based power and make connecting the cables between vessels and terminals a complex matter. To identify and remove such obstacles, the shore-based power project team of the municipality and PoR wants to set up a pilot at Steinweg as a follow-up to the Parkkade pilot. An autonomous, mobile installation with non-fossil fuel (hydrogen) will be tested within the framework of the energy transition.

Mobile solutions are required at sea port terminals where investments in shore-based power are less obvious. Tests are also being performed on a cable management system that can be deployed flexibly. The system should optimise the power supply between the quay and the vessel at quays where space is at a premium (at container terminals, for instance). What is more, measures are being conducted to gain better insight into consumption by vessels, to make optimisation of technical designs possible and restrict investment costs in order to make shore power possible on the quayside.

Steinweg will free the space required at the terminal for the pilot to proceed smoothly. It will also apply for a permit and ensure a safe working area by fencing it off. Cargow will convert two of its vessels to run on shore-based power in operational conditions. Steinweg and Cargow will be partially compensated for the project by the municipality and the Port Authority.

Furthermore, the container ports of Rotterdam, Antwerp, Bremen, Hamburg and Haropa (including Le Havre) are coordinating their plans for shore-based power, which will lead to standardisation, lower costs and acceleration of the use of shore power. In the Port of Rotterdam, the Stena Line terminal in Hoek van Holland has shore power and this year, Heerema will put into operation a shore power installation for its offshore vessels at Landtong Rozenburg.

Calculations by DNV GL and the Port Authority indicate that the total energy demand of sea-going vessels in the port amounts to around 750-850 GWh. This is equivalent to the energy consumption of some 200,000 households. This means there is much to be gained in terms of air quality, liveability and the climate.