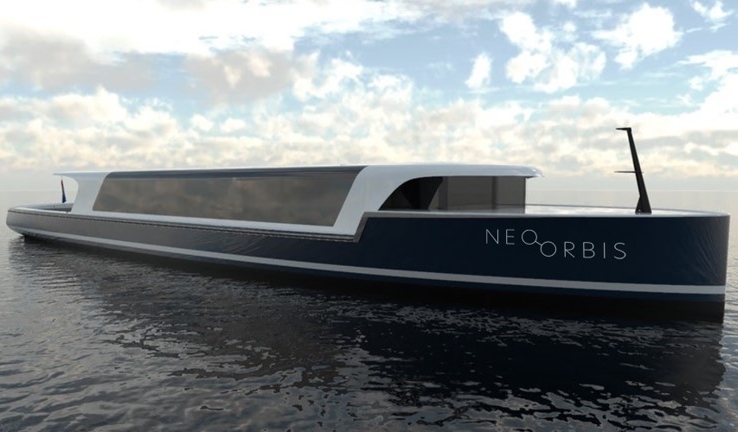 Through a H2SHIPS pilot, Port of Amsterdam is looking to launch its first hydrogen-powered vessel, the Neo Orbis. It will sail using hydrogen in a solid form: sodium borohydride. A public tender for the vessel’s construction has now been launched.

The Neo Orbis will replace the port’s current saloon boat, De Havenbeheer, and will be used to show clients around the port. Neo (new) comes from Latin and orbis (world) from Greek.

The Port of Amsterdam‘s public tender is open for bids until 8 April, 2022. One month later, on 9 May, the award decision will be announced.

Also read: Sailing battery for city and port of Amsterdam

Hydrogen is widely seen as a potential fuel for the decarbonisation of transport. The Port of Amsterdam wants to use it in a new form: sodium borohydride (NaBH4), which is solid. It allows for the safe and compact use of hydrogen, while the vessel can operate emission free.

The vessel will be powered by electricity generated from hydrogen. Using sodium borohydride means hydrogen does not need to be stored on board in gas form, something that is difficult to do. Sodium borohydride reacts with water, producing hydrogen.

A fuel cell on board the Neo Orbis will produce a current from the hydrogen and oxygen. A battery captures that current and subsequently drives the vessel’s propeller.

In order to compete with fossil fuels, the substance must be compact enough to be stored on board (bunkering), while offering enough energy density. In addition, it must be economically competitive with gas oil (with a low sulphur content) and be at least as safe.

Sodium borohydride can already compete with diesel in two of these areas. Its volumetric energy density in its pure, dry form is much higher than other hydrogen sources and is close to that of diesel. It is also much safer than gas or liquid hydrogen, according to the Port of Amsterdam. The ignition temperature for sodium borohydride is 70°C, for diesel this is 55°C and for hydrogen gas room temperature.

Yet, there are some disadvantages to the use of sodium borohydride. It requires a lot of volume for the additional systems on board. There is also a residual substance – the spent fuel – which must be stored on board. This residue can, however, be converted to new sodium borohydride on shore with green energy.

Another drawback is the cost of (green) energy to generate hydrogen and a solution to this problem is not yet part of the pilot. The Port of Amsterdam says it will work on this in the future.

The development of the vessel is being done in cooperation with H2SHIPS, from which the Port of Amsterdam has also received a subsidy. H2SHIPS is an EU Project funded by Interreg North-West Europe and will develop an infrastructure for shipping using hydrogen propulsion that can drastically reduce pollution and improve air and water quality.