Sailing battery for city and port of Amsterdam 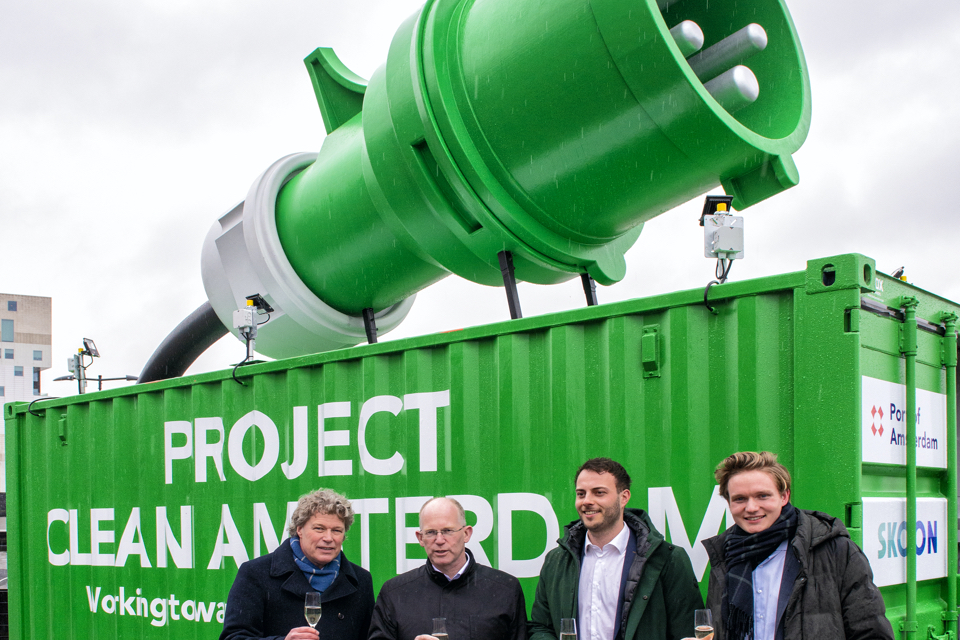 Skoon Energy and Port of Amsterdam have started Project Clean Amsterdam. The project revolves around a floating, containerised battery that is to provide the city and port with clean energy.

The Port of Amsterdam uses the mobile battery to deal with temporary peaks in the shore power network. Skoon is a platform that seeks to optimise the use of mobile batteries by bringing supply and demand together.

In April and May, the number of river cruise ships visiting Amsterdam peaks. The available shore-based power supply is not always sufficient. As a result, the moored ships turn on their diesel generators. This causes noise nuisance and extra emissions. The battery supplies green electricity at these peak times without any noise.

‘With this project we can absorb the peaks in the use of shore power for river cruise ships,’ says Robin Schipper, innovation manager at Port of Amsterdam. ‘With the current power connection we can now supply eight ships with shore power at one location, while power is required for ten ships. There are several times in a day when ships temporarily require more power. By switching on the battery at those moments, we create an extra buffer in the available capacity of the grid manager. Together with Skoon and Zoev-City, we will also use the battery for the inner city of Amsterdam.’

Over the next six months, the battery will be used in the port for two weeks, followed by two weeks of work in the city. Construction sites, events and film sets often need temporary power supplies. Traditionally, diesel generators would then be used.

‘The possibilities of using mobile batteries are endless. For example, if there is work on the quays and bridges in Amsterdam, they can replace polluting diesel generators. Zoev-city’s electrically powered ship takes care of the transport of the battery. In this way, we reduce pressure on the congested road network in Amsterdam and do not take up parking spaces,’ adds Daan Geldermans, co-founder of Skoon.

The battery uses sustainable energy sources from the port such as Wind Farm Ruigoord, solar panels and energy from biomass from AEB. In this way, it contributes to the ambition of Port of Amsterdam for a zero emission port.

‘We admire Amsterdam for its progressive clean energy initiatives,’ says Kees Koolen, CEO, Koolen Industries. ‘The canal boats that run on diesel are being converted to electric and the charging infrastructure for electric vehicles is rapidly expanding. The idea to make batteries mobile by means of a boat is a nice addition to the clean energy system of this city.’