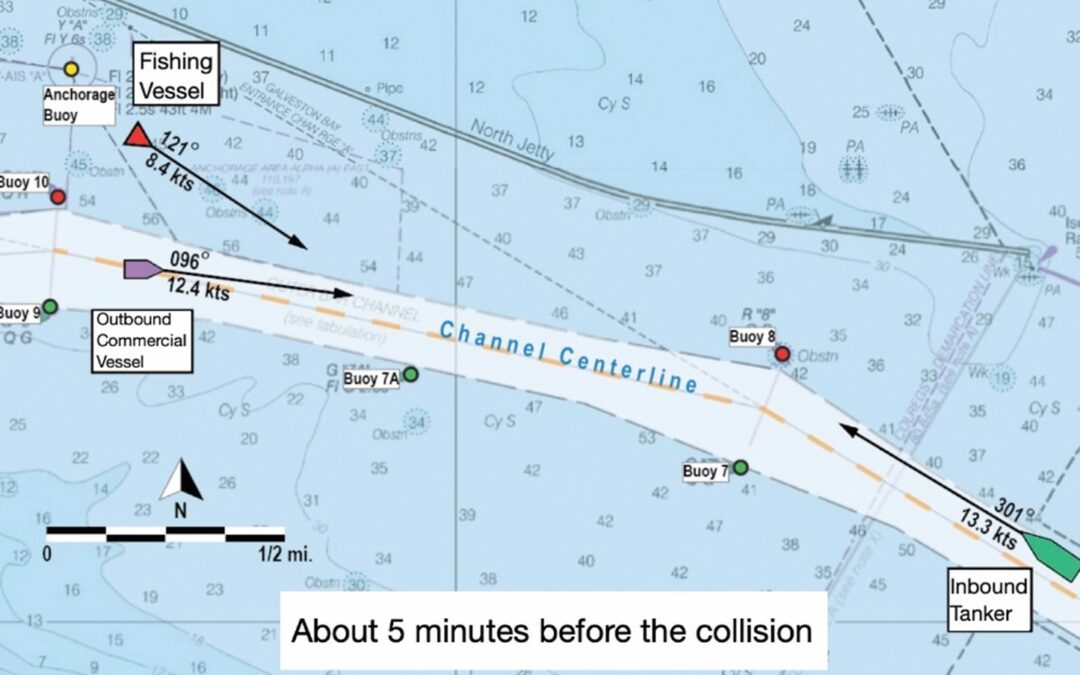 The Nautical Institute stresses that slowing down your ship in near zero visibility is always the sensible thing to do. In its latest Mars Report, a loaded tanker collided with a fishing vessel with an approach speed of almost 22 knots.

A loaded tanker was inbound under pilotage, making 11 knots in a restricted waterway. Visibility was initially low at about 0.5 nm, but the pilot told the master that visibility was clear in the harbour and had been clearing for the last few hours. They agreed to continue the inbound transit. The pilot set up two portable pilot units (PPUs) and informed the master that he would hail outbound vessels to arrange port-to-port passages. A crew member was sent to the bow as lookout/anchor standby. The fog horn was sounding from the forward mast.

Meanwhile, an outbound fishing vessel ahead had turned to starboard and was heading towards the channel at an angle of intersection of about 30°. On the tanker at this time, the pilot planned to meet an outbound commercial vessel by moving to the extreme right side of the channel, giving the centre channel to the outbound ship.

About one minute after the failed VHF communication with the fishing vessel’s operator, the tanker’s pilot sounded five short blasts. Electronic data shows the fishing vessel maintained its heading nonetheless.

The subsequent official investigation could not determine why the fishing vessel’s operator did not slow or take substantial action to avoid transiting into the channel directly in front of the tanker, or what the captain of the fishing vessel was doing in the minutes leading up to the collision.

It is possible the captain was away from the conn, was distracted, fell asleep, was unsure of what action to take, or was otherwise unable to respond to the developing situation. The captain’s failure to slow his vessel, act on his automatic radar plotting aid (ARPA)’s information or respond to the tanker pilot’s communications may have been due to a medical event.

This accident was covered in the Mars Reports, originally published as Mars 202206, that are part of Report Number 352. A selection of this Report was also published in SWZ|Maritime’s March 2022 issue. The Nautical Institute compiles these reports to help prevent maritime accidents. That is why they are also published on SWZ|Maritime’s website.