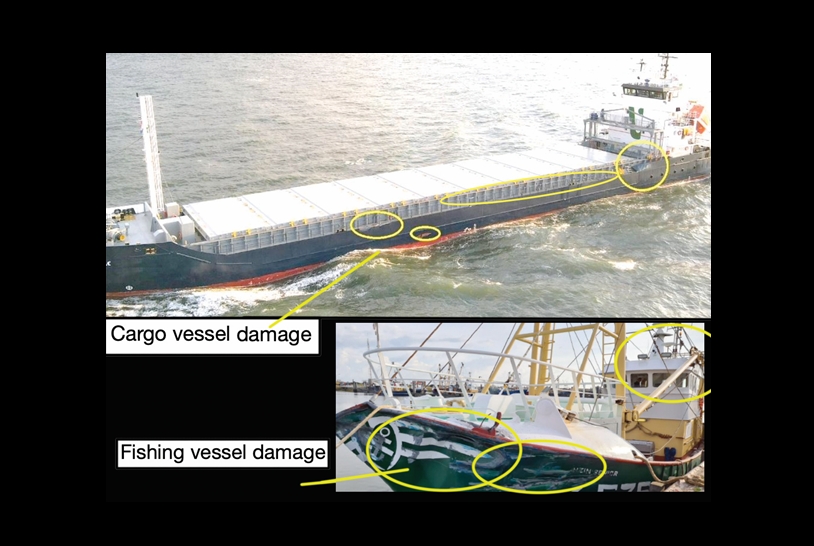 When in doubt and always when a very small CPA is detected, establish early communications with the other vessel and ensure everyone knows what actions are to be taken. The Nautical Institute gives this advice in its latest Mars Report in which it describes how a general cargo vessel collides with a fishing vessel.

A general cargo vessel was sailing in a traffic separation scheme (TSS) at night in calm seas and good visibility. The vessel was under autopilot, on a course of 249 degrees at approximately 10.5 knots. The officer of the watch (OOW) noticed four fishing vessels on the radar that were crossing the TSS and appeared to be sailing as a group. The fishing vessels were approximately 10.5 nm away and approaching on the port side, showing closest points of approach (CPAs) of between 0.1 and 0.6 nm. The time to closest point of approach (TCPA) was approximately fifty minutes.

Some time later, the OOW set the radar to a 6 nm range. The radar indicated three CPA/TCPA limit alarms from the group of four fishing vessels. One of the fishing vessels altered course approximately 30° to port in order to cross ahead of the cargo vessel with a CPA of 0.4 nm.

By this time, another officer had arrived on the bridge of the cargo vessel for the change of watch. Before the handover could be accomplished the OOW on duty realised that fishing vessel A was not taking avoiding action. The OOW sounded the horn to warn fishing vessel A and then put the rudder hard to starboard. About forty seconds after sounding the horn, the two vessels collided. Fishing vessel A ran into the port side of the cargo vessel amidships and then slid aft. Both vessels sustained structural damage, but there were no injuries.

In addition to the advice given above, The Nautical Institute states that sound navigation practices and a good lookout would have avoided this accident as the master of the fishing boat would have realised there was a stand-on cargo boat on his course with a zero CPA.

This accident was covered in the Mars Reports, originally published as Mars 202205, that are part of Report Number 352. A selection of this Report was also published in SWZ|Maritime’s March 2022 issue. The Nautical Institute compiles these reports to help prevent maritime accidents. That is why they are also published on SWZ|Maritime’s website.