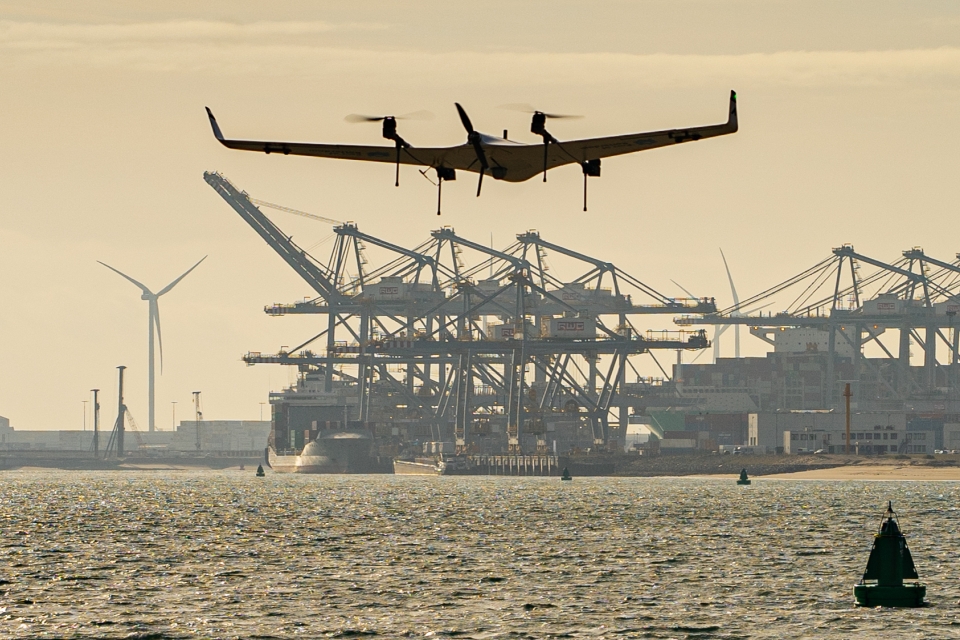 The Port of Rotterdam Authority will start a pilot on regulations and traffic control in the so-called “very low-level airspace” to ensure that increased drone traffic over the Rotterdam port area is coordinated properly. It is the first time a pilot of this kind takes place in the Netherlands. Parties that might provide support will be invited to tender soon.

Handling manned air traffic is in the safe hands of Air Traffic Control the Netherlands. Shipping traffic in and around Rotterdam is controlled by the Harbour Master’s Division. No such facility, however, is in place for professional drone traffic, which operates in “very low-level airspace”. Consequently, the Port of Rotterdam Authority is starting a pilot to find out how and by whom this can be done best and to draw up a proper set of rules for safe traffic in airspace.

The number of drone flights – for inspections, security, crime detection, and in the not-too-distant future for parcel delivery – is increasing. This positive development is in line with the Port of Rotterdam Authority’s policy to be a clean and smart port. Drones are fast, clean, relatively cheap, and safe, and require little maintenance.

In the hybrid port of the future, drones will be used in addition to vessels, trains, and trucks for the transport of freight and passengers. It is expected that the first vertiports (areas designed specifically for aircraft landing and taking off vertically) might be tested in Rotterdam in as early as 2024, to be followed two years later by the first commercial flights using flying taxis, albeit with a pilot. Manufacturers are currently developing these drones to carry between two and six passengers.

The port area is only accessible to drone operators with a permit from the Human Environment and Transport Inspectorate. Multiple flights in the same airspace simultaneously will be the rule rather than the exception in the future.

As safety has the highest priority in the Port of Rotterdam and emergency services (e.g. trauma helicopters, police helicopters) are to operate unhindered at all times, the Port Authority will soon be inviting companies that offer an Unmanned Traffic Management system to tender. This UTM, also know as “U-space”, is a system for monitoring drones in the air, verifying whether the drones are allowed to be there, and controlling drone traffic professionally.

Besides the companies and institutions involved in drone flights, the Ministries of Defence and Infrastructure & Water Management, as well as the Human Environment and Transport Inspectorate are involved in the Rotterdam prototype U-Space Airspace. The prototype should yield reliable information about the type and amount of work drone airspace control takes, the costs required, and an answer to the question of who will carry out the activities. The ultimate objective is to safeguard airspace safety in the longer term.

The pilot will start by mid 2022 and will take two years. After its completion, more decisions can be made about setting up drone airspace control.

Picture: Drone deployment in the port of Rotterdam (by Luuk Barth).