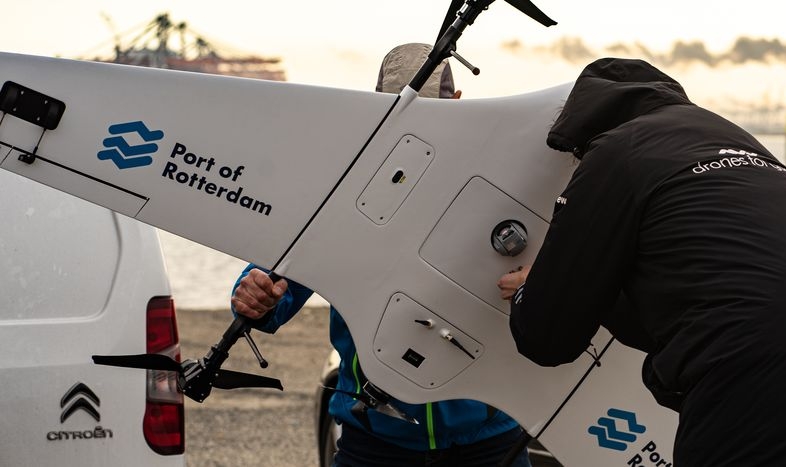 Last week, a section of the quay at the Yangtze Canal was transformed into a drone port to demonstrate a long-range drone from the Dutch company Avy. Several drone flights were carried out during the week above the Amaliahaven, Arianehaven and Alexiahaven.

Tests were also carried out on the camera used during drone flights to monitor port activities and inspections of port assets, such as quay walls, of the Port of Rotterdam Authority. The test and demo week is part of the ‘Drone Port of Rotterdam’ innovation programme in which the Port Authority seeks to test new technologies that make the port safer, smarter and faster.

During the week of 25 October, a section of the quay at the Yangtze Canal was converted into a drone port. A construction site hut was set up as a Command Centre and an Avy station was installed on the quay. This docking station allows for autonomous operations and immediate deployment.

Also read: The Netherlands to deploy autonomous drones for incidents on the water

For the Harbour Master’s Division, the pilot focused on sea and inland waterway inspections such as bunkering, water pollution, board-to-board transshipment, zoning/hazardous substances, shore-to-board transshipment, air pollution (smoke/soot) and repairs on board ships. For example, if a drone reveals an open tank lid, it could possibly indicate illegal degassing by ships and an investigation could be carried out.

During the pilot, the Dutch company Avy used its new type of plane drone. This drone can cover longer distances and reach higher speeds, so that the entire port can be covered with two to three devices and in the event of an incident the drone can reach the location very quickly. This makes it interesting for various types of activities by the Harbour Master’s Division; handling incidents, smarter patrols, inspection-supervision of vessel activities, port security and also traffic handling.

Demonstration events were included for interested parties who were invited. These included government departments such as the Netherlands Food and Consumer Product Safety Authority, rail and network operators, as well as logistics service providers, agencies and shipping companies.

The Avy Aera drone that was tested can also carry refrigerated medical supplies. In the future, new developments will be examined and tested, such as the transport of parts and cargo samples so that they can be transported to ships in the future.

The next long-term drone operation will follow in early 2022; flights will be carried out on a weekly basis over a period of five months. External parties can also submit test requests for the drones to be deployed.

In the coming period, the new Avy Aera V3 device will be used in combination with the Avy Docking Station. This offers an even higher degree of autonomy and it can handle more severe weather conditions. The drone station will then be installed at the Rotterdam Pilotage on the Pistoolhaven for testing, further expanding the flight zone. A new aspect of this operation involves the joint use of the same airspace by pilot helicopters and drones; something that must be clearly and safely regulated in the future.