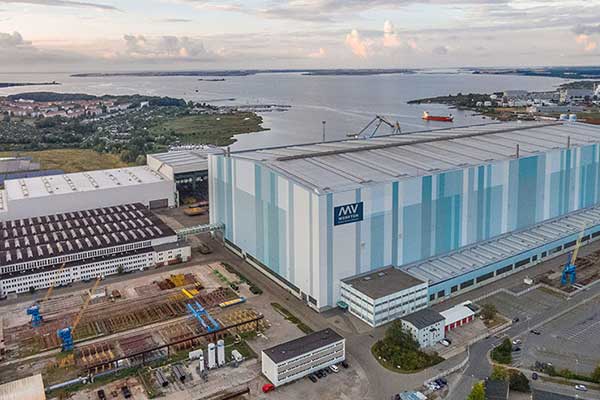 German media report submarine builder Thyssenkrupp Marine Systems (TKMS) has shown interest in taking over the Wismar shipyard of MV Werften. MV Werften and Lloyd Werft filed for bankruptcy in January after owner Genting Hong Kong got into financial trouble due to the Covid-19 pandemic.

Genting Hong Kong used the shipyards to build cruise ships. When the cruise market collapsed, Genting had to file for bankruptcy for its German shipyards.

Wismar is the third shipyard that may now find a new owner, after the city of Stralsund acquired the shipyard in Stralsund in February and the Lloyd Werft in Bremerhaven was sold to a consortium of bidders consisting of the Rönner and Zech Group. That has left the shipyards of MV Werften in Wismar and Rostock.

The city of Stralsund is planning to settle a large number of maritime companies at the shipyard in Stralsund whereas Rönner-Zech want to use the site in Bremerhaven as a conversion and ship repair yard and will use the northern part for commercial operations, such as steel construction.

Also read: Rönner-Zech acquires Lloyd Werft and plans to use it for ship repair

According to German news channel NDR, the deadline for submitting a first offer for the Wismar and Rostock locations is early April. TKMS told NDR it is in the market for ‘capacity extensions in Germany capacity expansions in Germany in order to be able to process the production of the current orders in the best possible way and, above all, in a timely manner’, but has not officially confirmed this may involve the Wismar shipyard.

TKMS expects a lot of new orders from the German government now that the war in Ukraine has prompted large investments in the German armed forces. NDR says this could mean TKMS would move beyond submarines to the production of frigates or corvettes. However, it is not only about space, but also about skilled workers who can process possible new orders. According to NDR information, the company has already offered 120 engineers from Wismar a takeover.

Picture: The shipyard in Wismar (by MV Werften).