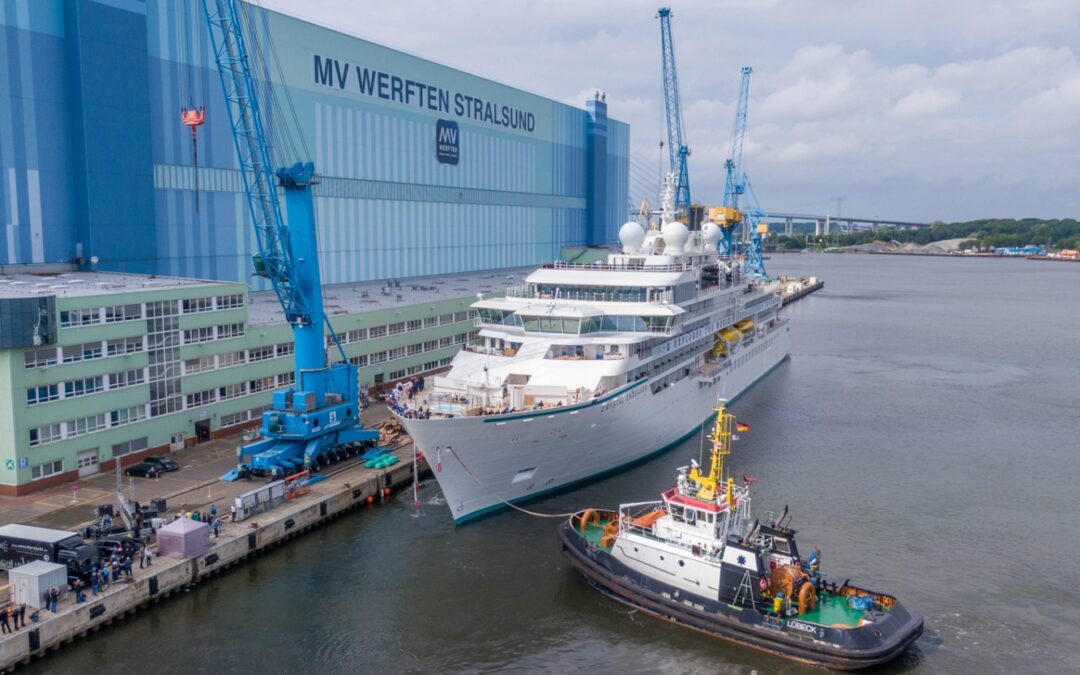 Despite large investments of the Genting Group since 2016 and the delivery of the Crystal Endeavor in July 2021, cruise shipbuilder MV Werften could no longer cope as a result of the Covid-19 pandemic and is filing for bankruptcy on Monday, 10 January. MV Werften employs around 2000 people.

The yards were initially combined with Lloyd Werft, previously purchased by Genting, to form the Lloyd Werft Group, but the three ex-Nordic yards were organised into MV Werften, headquartered in Wismar and led by Jarmo Laakso later that year.

The German Shipbuilding and Ocean Industries Association (Verband für Schiffbau und Meerestechnik, VSM) says the entry of Genting was a stroke of luck for the country at that time as it resulted in an increase in employees and large investments at all three locations. However, the trade association says the project was ‘a great challenge from the very beginning: to successfully enter the market for one of the most complex products in the manufacturing maritime industry.’

With the delivery of the Crystal Endeavor, it was demonstrated that building the necessary capabilities was well underway, but the Covid-19 pandemic pulled the rug out from under Genting. According to VSM it is understandable that the focus was always on the “cruise market”, considering Genting is an entertainment company. But in the end, the enormous revenue shortfalls of the parent company took away the necessary leeway that would have been needed to implement the ambitious plans.

MV Werften was currently building the Global I for Dream Cruises, a cruise line owned by Genting Hong Kong. At 208,000 GT and 342 metres long , it will be the largest cruise ship in the world until the even larger Wonder of the Seas is delivered to Royal Caribbean (228,000 GT, 362 metres). The Global I was scheduled for delivery in 2022.

In October 2020, MV Werften received a 193-million-euro loan to complete the Crystal Endeavor for delivery and keep the shipyard operations going till March 2021. The loan was provided by the State of Mecklenburg-Vorpommern and the Federal authorities.

The German government was considering to come to the shipyards’ aid once again, but asked Genting to bring in extra money as well, which it could not do. This has now led to the company filing for bankruptcy.

VSM sees this attitude of the government as understandable. In a statement, it says: ‘With considerable effort, the company was repeatedly given more time to find viable solutions. In the acute situation, however, the financial situation of the owner company did not allow sufficient confidence in the future prospects.

From the VSM’s point of view, it is now crucial to enable the preservation of the four locations on the Baltic Sea and in Bremerhaven within the framework of a change of ownership.

VSM: ‘The German shipbuilding industry can no longer afford further loss of substance on this scale. The maritime industry is facing a major upheaval. The entire fleet must be converted to climate neutrality, the production of renewable energy offshore must be massively expanded and the infrastructure for sustainable fuels and for carbon capture and storage must be built. This will require extensive production capacities in the maritime industry in the coming years. Against this background, the insolvency can also prove to be an opportunity, as the way is now clear for other market segments and business models.’

VSM appeals to politicians to quickly create the conditions now so that the German economy can actively seize these opportunities.