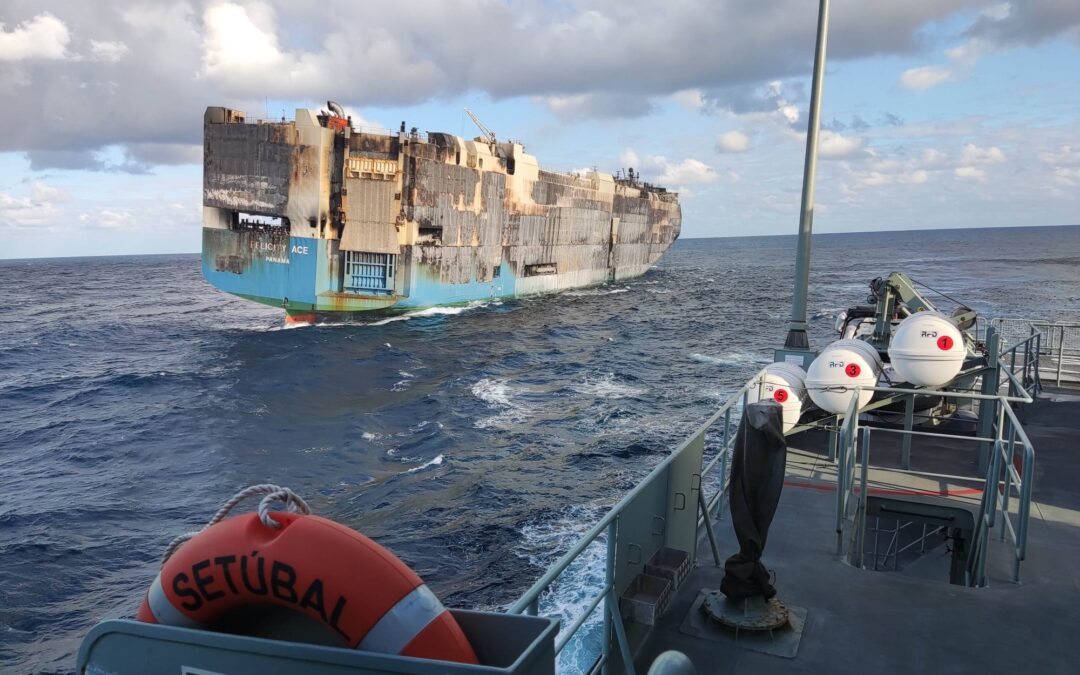 Initial reports from the local salvage team state that the fire-stricken car carrier Felicity has sunk at around 9 AM local time. Operator MOL says the sinking occurred after the vessel had suffered a list to starboard.

According to MOL, the last vessel position was around 220 nm off the Azores and about 25 nautical miles outside the Exclusive Economic Zone of Portugal. Water depth in the area is about 3000 metres. When the vessel sank, there was a small oil slick seen in the water. The salvage vessels will remain around the area to monitor the situation. The company will provide further information as it becomes available.

On Friday (25 February), the Smit Salvage team succeeded in securing a towing connection to the burning car carrier Felicity Ace. The vessel was subsequently being towed by Boskalis’ anchor handling tug supply and firefighting vessel Bear to a safe area off the Azores.

So far, the vessel had remained stable without leaking any oil. According to MOL there was no longer any smoke leaving the vessel at that time.

The Portuguese Navy is monitoring the area where the Felicity Ace sank with its vessel NRP Setúbal. The vessel is now equipped with two drones and their respective operation teams, a kit for collecting water samples and equipment to contain a possible spill.

The Navy, through the Marine Meteorological and Oceanographic Geospatial Center (CGEOMETOC) of the Hydrographic Institute, is performing forecasts of drift of waste spills. The wind forecast calculations and the analysis of the surface current, integrated in an algorithm, make it possible to obtain the drift forecast and the most likely route of the debris patch.

As a preventive measure, one of the tugboats that was towing the Felicity Ace is in transit to Ponta Delgada to pick up extra anti-pollution equipment.

The situation is also being monitored by the Directorate for Combating Sea Pollution of the National Maritime Authority, and by the European Maritime Safety Agency (EMSA), with the daily capture of two satellite images of the area. On Wednesday (2 March) a C-295 aircraft, from the Portuguese Air Force, was also deployed to monitor the location where the vessel sank.

On 16th February, at approximately 1130hrs CET, a fire broke out on the car carrier Felicity Ace some 90 nautical miles southwest of the Azores in the Atlantic, whilst the vessel was on passage from Germany to USA. With assistance from commercial ships and a helicopter in the area, all 22 crew members were safely evacuated from the ship.

Tugs were sent to the vessel to help fight the fire. On Friday (25 February), a salvage team was finally able to board the vessel.