Smoke from Felicity Ace reducing, salvage team to board 24 February 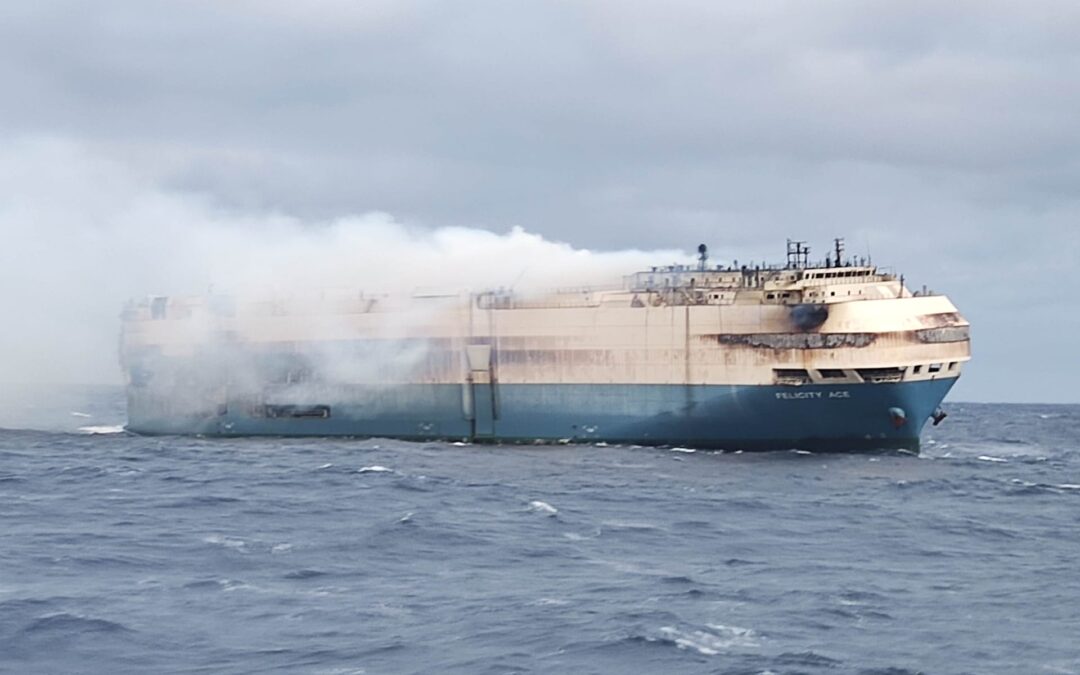 The car carrier Felicity Ace remains on fire and driftimg south of the Azores Islands in the Atlantic. MOL reports today that white smoke from the vessel is still visible, but has reduced compared to the past few days. According to the Portuguese Navy, a salvage team will board the ship tomorrow.

MOL says the vessel’s stability remains intact and so far no oil spill has been detected, which is also confirmed by the Portuguese Navy. The two large tugs that have been spraying the vessel for hull and boundary cooling since Tuesday (22 February) are still doing this. One of the tugs on site is the Dutch Alp Guard with a bollar pull 0f 285 metric tonnes.

On Tuesday, MOL stated the third salvage vessel that was on its way to the Felicity Ace (most likely Boskalis’ anchor handling tug supply and firefighting vessel Bear, which now in fact shows its destination to be the Felicity Ace on MarineTraffic) was delayed to arrive the 26th of February, with a fourth vessel to arrive on the 23rd or 24th. Today, MOL says both vessels are expected to arrive today.

In the meantime, ​the Portuguese Navy’s ocean patrol vessel NRP Setúbal has remained on site to monitor the situation.

Salvage team to board car carrier

When conditions are safe, the salvage team will board the Felicity Ace for an initial assessment of future salvage and firefighting plans. The Portuguese Navy says they expect to get a salvage team on board the car carrier on 24 February. They will be brough on board by a Portuguese Air Force EH-101 helicopter. The team will analyse the conditions for making a tow connection.

Smit Salvage, which has been called in to manage the salvage operation, indicated earlier this week that they hoped to be able to secure a towing connection later this week.

On 16th February, at approximately 1130hrs CET, a fire broke out on the car carrier, Felicity Ace some 90 nautical miles southwest of the Azores in the Atlantic, whilst the vessel was on passage from Germany to USA. With assistance from commercial ships and a helicopter in the area, all 22 crew members were safely evacuated from the ship.