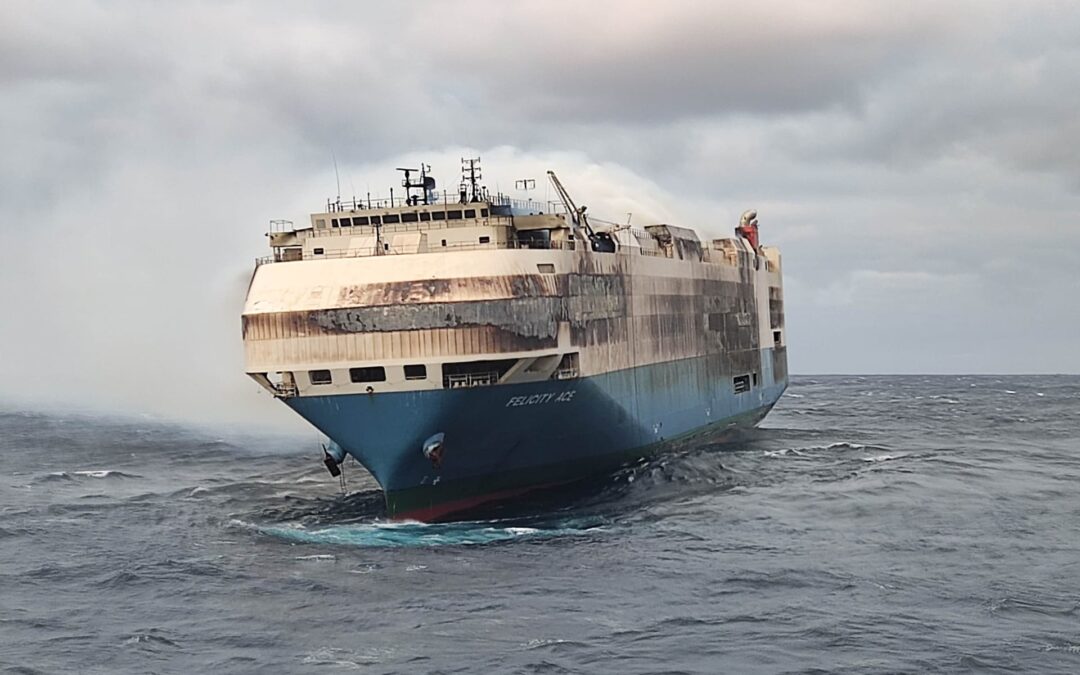 The Smit Salvage team has succeeded in securing a towing connection to the burning car carrier Felicity Ace. The vessel is now being towed by Boskalis’ anchor handling tug supply and firefighting vessel Bear to a safe area off the Azores.

So far, the vessel has remained stable without leaking any oil. According to the ship’s operator MOL there is no longer any smoke leaving the vessel.

The salvage team on site were able to board Felicity Ace by a helicopter and the vessel has started being towed by the Bear. The Bear has a bollard pull of 187 tonnes and is part of the Boskalis fleet. Boskalis is Smit Salvage’s parent company. The Felicity Ace is now heading for an area about 60 miles south-east of the island of Faial, where additional experts will board the vessel. They will be transported to the site by a civilian helicopter.

The two Dutch tugs that have been spraying the vessel over the past few days, the Dutch ALP Guard of ALP Maritime Services and Dian Kingdom of Seacontractors, together with a large salvage craft with additional firefighting capability, the VB Hispania of Boluda and sailing under the Maltese flag, are escorting the vessel.

The ocean patrol vessel NRP Setúbal, of the Portuguese Navy , will also remain on site providing the necessary assistance and permanently monitors the stability of the ship and possible sources of pollution in the water, which have not been recorded so far.

On 16th February, at approximately 1130hrs CET, a fire broke out on the car carrier, Felicity Ace some 90 nautical miles southwest of the Azores in the Atlantic, whilst the vessel was on passage from Germany to USA. With assistance from commercial ships and a helicopter in the area, all 22 crew members were safely evacuated from the ship.