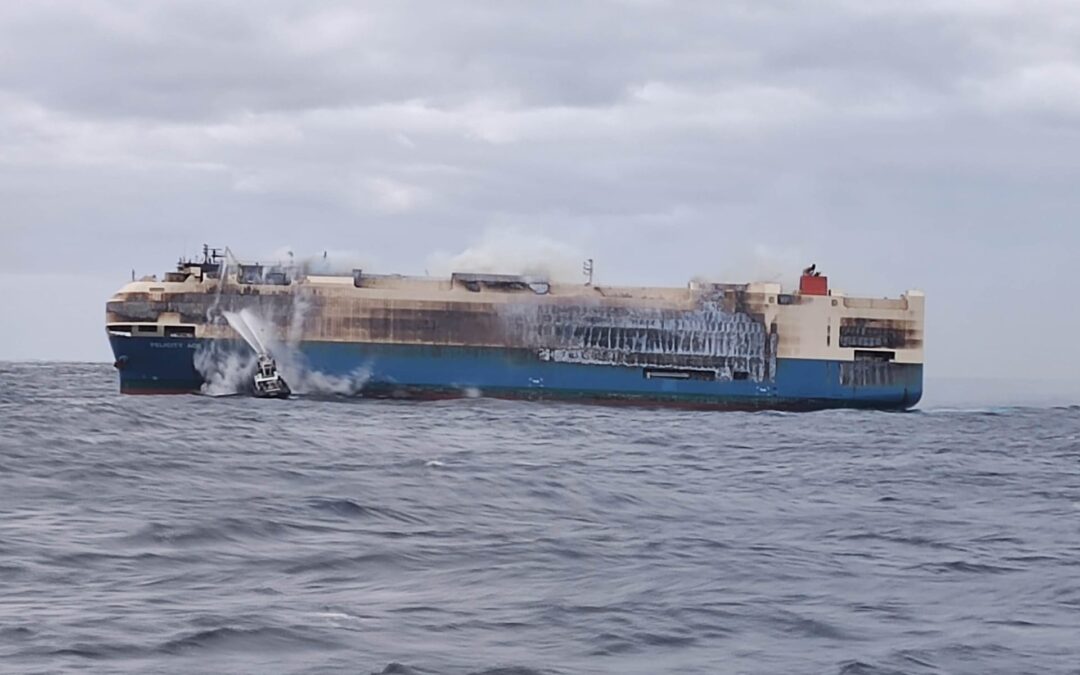 The car carrier Felicity Ace is still on fire and drifting south of the Azores Islands in the Atlantic. Two large tugs, including the Dutch Alp Guard, are now on site and spraying the vessel with water to achieve hull and boundary cooling. When conditions are safe, the salvage team will board the ship for an initial assessment of future salvage plans.

The two tugs will also assist to control the position of the car carrier prior to inspection by the initial salvage team already on site. The Smit Salvage team has already been on the scene for several days on board a local patrol boat. This patrol boat has also been providing cooling of the vessel.

A third salvage craft is also on its way from Rotterdam, but operator MOL reports this vessel has suffered a delay and will arrive February 26th instead of the 23rd or 24th. When looking at MarineTraffic, this could very well be Boskalis’ anchor handling tug supply and firefighting vessel Bear. This tug, with 187 tonnes bollard pull, left Rotterdam on 17 February and is headed for the Azores with an ETA of 26 February. When asked if this is indeed the case, Boskalis says it will not comment on the operation for now.

MOL has now revealed a fourth salvage craft is also en route and expected to arrive on February 23. Both salvage craft are to provide additional firefighting and towing capability. It is still hoped a towing connection can be made by the end of the week.

On 16th February, at approximately 1130hrs CET, a fire broke out on the car carrier, Felicity Ace some 90 nautical miles southwest of the Azores in the Atlantic, whilst the vessel was on passage from Germany to USA. With assistance from commercial ships and a helicopter in the area, all 22 crew members were safely evacuated from the ship. Currently, there is no oil leakage confirmed from the vessel, which remains stable.

MOL states the company and the salvage team are fully cooperating with local authorities and resources from the Azores to resolve the situation as soon as possible.