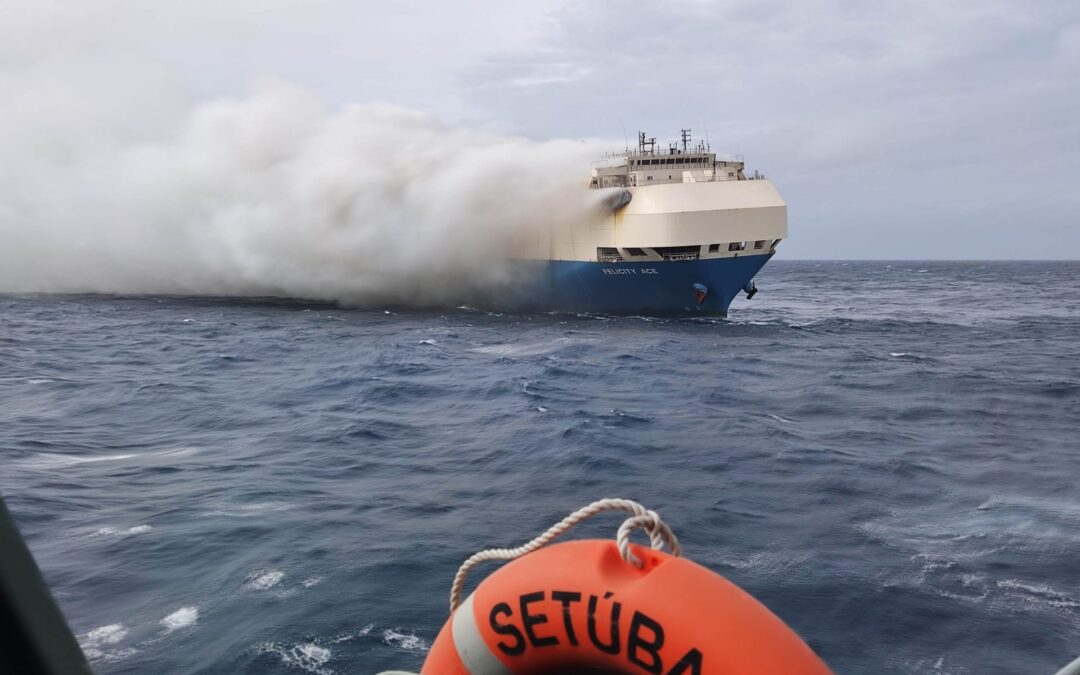 A Smit Salvage team has arrived at the burning car carrier Felicity Ace on board a local patrol boat, reports MOL Ship Management. Two large tugs, including the Dutch Alp Guard, and a third salvage craft will be deployed to fight the fire, which is hard to fight due to ignited car batteries. Smit Salvage hopes to secure the vessel to a tug by the end of the week.

On 16th February, at approximately 1130hrs CET, a fire broke out on the car carrier, Felicity Ace some 90 nautical miles southwest of the Azores in the Atlantic, whilst the vessel was on passage from Germany to USA. With assistance from commercial ships and a helicopter in the area, all 22 crew members were safely evacuated from the ship. Currently, there is no oil leakage confirmed from the vessel, which remains stable.

MOL Ship Management assumes the vessel will remain on fire for now, while it is located south of the Azores and currently drifting away from the islands. The Portuguese Navy, through the Ponta Delgada Maritime Rescue Coordination Centre (MRCC), has a warship standing by and monitoring the drift of Felicity Ace.

The Smit Salvage team consisting of sixteen experts, left for the Azores on the 17th of February and is now on site on a local patrol boat, according to MOL. Smit’s parent company Boskalis has told Dutch newspaper De Telegraaf that they hope to be able to secure the Felicity Ace to a tug boat by the end of the week.

The Felicity Ace has about 4000 cars (including Bentleys, Porsches and Audis) on board, including electric ones. Captain Joao Mendes Cabecas of the port of Hortas on the Azores has told Reuters that lithium-ion batteries in the electric cars on board the car carrier have caught fire, which makes the fire difficult to quench. According to Mendes Cabecas, specialist equipment will be needed to extinguish the fire.

It is not clear whether the batteries first sparked the fire.

The company says two large tugs with firefighting equipment have been arranged to support the vessel. MarineTraffic shows that the tug Alp Guard (285 mt bollard pull), operated by Alp Maritime Services and sailing under the Dutch flag, arrived on site yesterday. This tug was also deployed to pull the Ever Given free in the Suez Canal.

Also read: These are the most powerful tugboats in the world

The second tug, from Gibraltar, is scheduled to arrive on scene today, 21 February. In addition, a salvage craft with firefighting equipment is set to arrive from Rotterdam on the 23rd or 24th of February.

The 60,118 GT Felicity Ace sails under the flag of Panama and was built in 2005. It is owned by Snowcape Car Carriers (fully owned by MOL) and is operated by MOL.