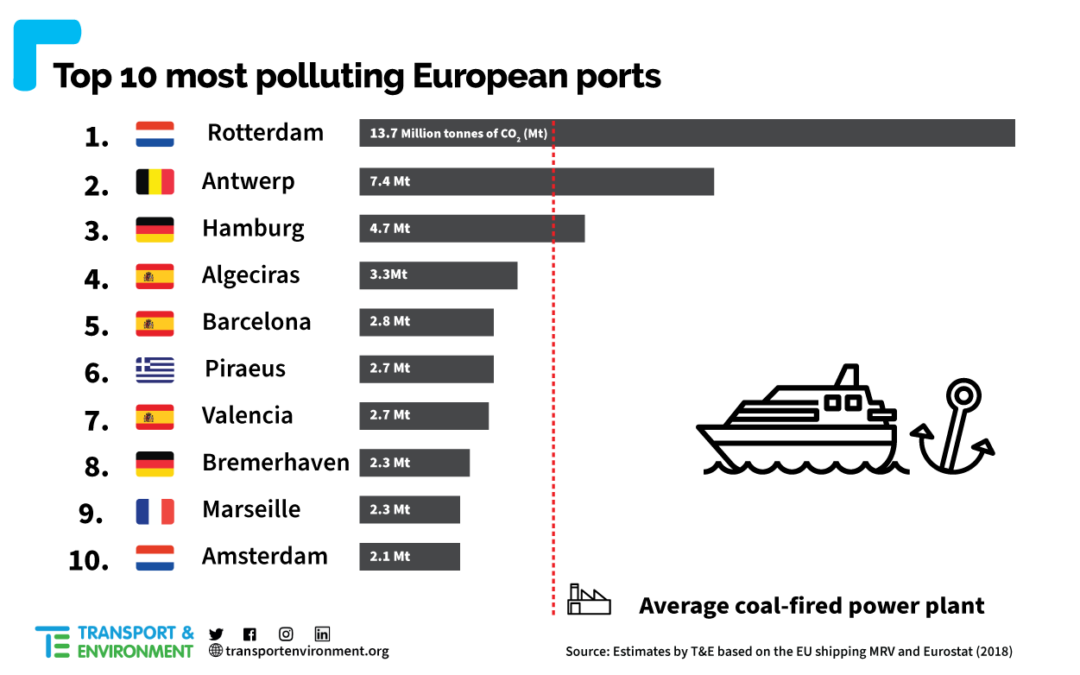 The port of Rotterdam is associated with almost 14 million tonnes of CO2 each year, a new study ranking ports’ carbon emissions by NGO Transport & Environment (T&E) shows. Antwerp and Hamburg come in second and third, while three of the top ten polluting ports are in Spain.

The study, carried out by T&E, assesses carbon emissions from ships departing and entering ports from across the supply chain, as well emissions from activities at port like loading, unloading and refueling. The shipping industry is a fast-growing emitter and Europe’s ports have been reluctant to back mandates for clean fuels, says T&E.

The post-Covid rebound in trade has seen container shipping prices soar, but even before the pandemic, where data is available, ports were handling more and more goods. Between 2012 and 2019, cargo volumes at Rotterdam, for example, rose by thirteen per cent. With container profits at an all time high last year and shipping companies with profits rivalling even those of Apple and Facebook, ports are expected to have had a lucrative year in 2021, too.

Jacob Armstrong, sustainable shipping officer at T&E: ‘The shipping industry is making a killing right now. Ports are at the heart of this and their climate impact is enormous. Yet, instead of getting behind proposals to clean up shipping, like comprehensive port electrification and mandates for green fuels, ports simply aren’t doing enough to clean up the sector.’

Data from ship emissions at ports is also damning, according to T&E. Rotterdam once again scores worst with important port metropoles such as Antwerp, Piraeus (Athens), Barcelona and Hamburg also scoring badly on emissions from port activities like loading, unloading and refuelling.

T&E points to port lobbyists, who according to the NGO block stricter targets for shore power including oil tankers and bulk carriers, which could reduce harmful emissions for port communities.

‘Ports can have a direct impact in greening our planet by providing clean shipping infrastructure,’ Armstrong concludes. ‘This means installing hydrogen-based refueling infrastructure and shore-side electrification that would allow ships to turn off their engines and plug in at port. This would also significantly improve the lives of those living near what are currently some of the most polluted places on earth.’

Port of Rotterdam Authority not surprised by study outcome

The Port Authority is not surprised by the outcome of the study. ‘Rotterdam is Europe’s largest port with almost 30,000 sea-going vessels a year,’ a spokesperson has told Dutch newspaper AD. ‘It is therefore logical that the CO2 emissions of shipping are also the highest.’

In addition, the Port Authority stresses that it has several shore power projects underway and that most pollutions occur at sea instead of in port. ‘So the gains are mainly in tackling emissions at sea. For example, with cleaner fuels such as methanol and bio-LNG,’ the spokesperson adds.

The European Commission can help ports by directing revenues from the forthcoming carbon market to clean fuel infrastructure in ports, advises T&E. The EU’s green infrastructure law (AFIR) is currently under discussion in the European Parliament and the Council, with a final text expected in the second half of 2022. T&E calls on ports to support the proposal.