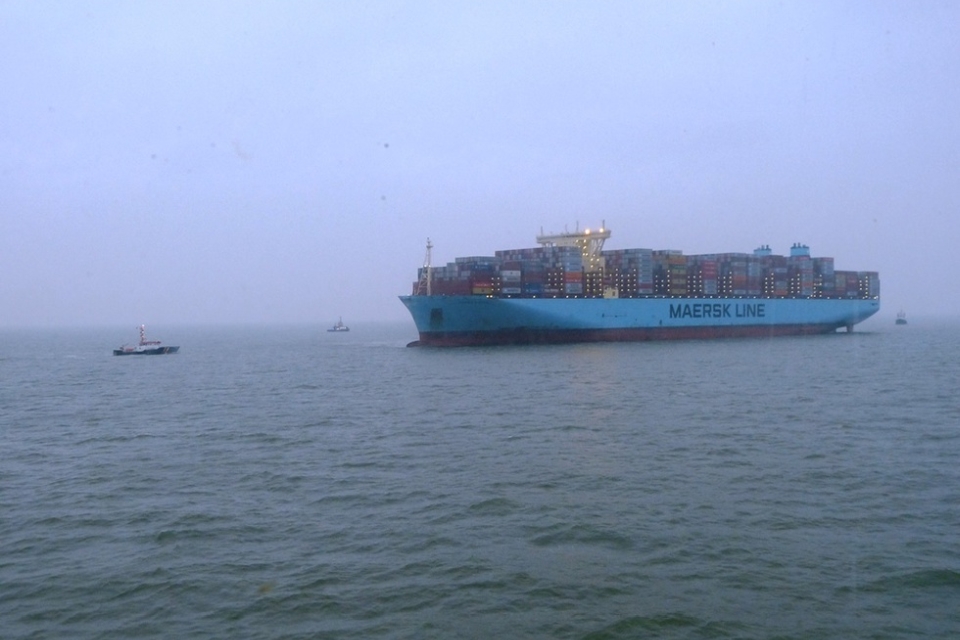 In the night of 2 February at about 23:05, the container ship Mumbai Maersk ran aground while approaching the Weser estuary close to the German Wadden Island Wangerooge in the North Sea. The ship was on its way from Rotterdam to Bremerhaven. At around midnight, tugs will try to pull the ship free.

The 19630 TEU Mumbai Maersk measures 399 x 59 metres, was built in 2018 and sails under the Danish flag. Maersk reports no crew members were injured in the incident. The container shipping company also says there is no pollution and no sign of hull breach, which has also been confirmed by the German authorities.

It is as yet unclear what caused the vessel to ground.

The Central Command for Maritime Emergencies (CCME, Havariekommando) took over the overall command after a request from the Bremerhaven traffic centre. The multi-purpose vessels Neuwerk and Mellum as well as five other tugs were ordered to the scene of the accident. A Towing Assistance Team went on board the Mumbai Maersk to assist.

A first attempt to tow the ship into deeper water in the early morning hours was unsuccessful due to the ebbing water. Planning for a further towing attempt is currently being intensified and planning details are being worked out. As soon as all preparations have been completed and powerful tugboats are on site, another salvage attempt is to be launched when water levels are optimal. CCME has told Reuters that this second attempt is scheduled for around midnight.

A sounding vessel has already been ordered to the accident site to obtain up-to-date information on the water depths. An On Scene Coordinator (OSC) from the CCME is on site and coordinating the planned measures. Maersk has in the meantime concluded a contract with an undisclosed salvage company.