Damaged Julietta D about to be towed to port of Rotterdam 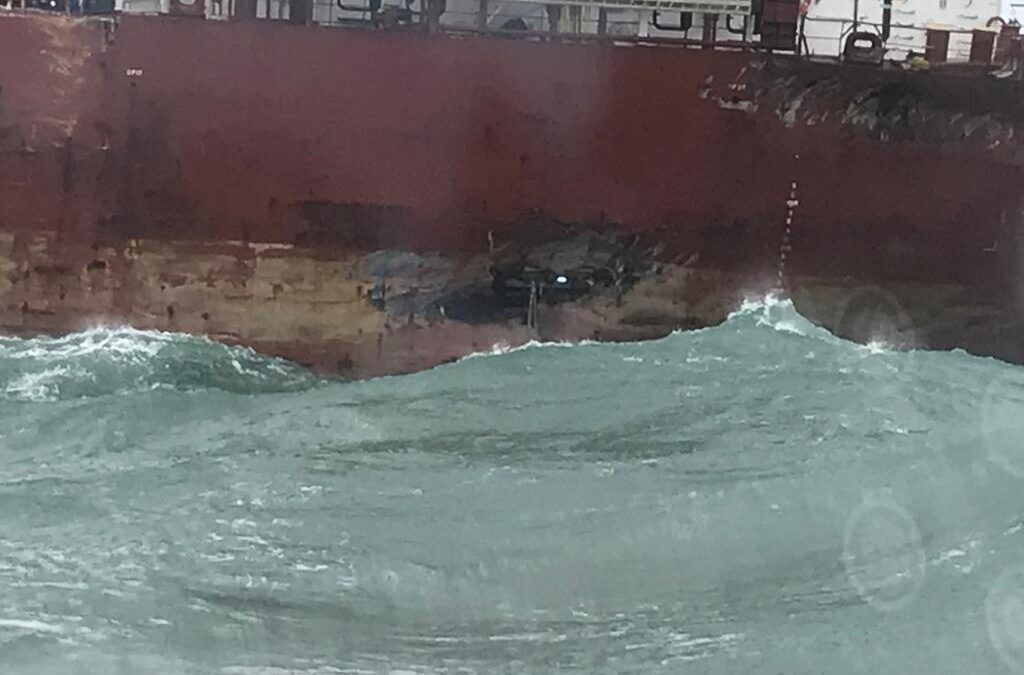 At around 7 pm Monday night, tug Sovereign managed to secure a tow line to the Julietta D, which had been adrift and making water after colliding with the Pechora Star on in the morning. The Coast Guard said last night the convoy was waiting for calmer weather to begin its journey to the port of Rotterdam. MarineTraffic shows the vessels are currently west of the Nieuwe Waterweg.

Both bulk carrier Julietta D and oil/chemical tanker Pechora Star were in an anchorage near IJmuiden, the Netherlands when the bulk carrier’s anchor gave way. The vessels collided resulting in damage to the Julietta D’s hull causing it to make water. The Pechora Star remained stable. It is likely storm Corrie, which raged over the Netherlands yesterday, played a role in the anchor giving way.

The eighteen crew members of the Julietta D were subsequently evacuated by helicopter by the Dutch and Belgian Coast Guard. The vessel then drifted within Vattenfall’s offshore wind farm Hollandse Kust Zuid, which is currently under construction. This wind farm is located about 18 kilometres from the coast between The Hague and Zandvoort. The vessel then hit the foundation of a transformer station under development. It is as yet unclear whether the foundation of the platform was damaged in the allision.

The Dutch Coast Guard released photos of the Julietta D showing a breach in the hull. Dutch newspaper AD reported the vessel’s emergency power was still working and as such, a pump could be used to remove the water that was entering the hull through the breach.

Tugs Sovereign and Multratug 18 were sent to the ship to try and secure a tow connection to the Julietta D. The Sovereign was the first tug on site. A helicopter brought a salvage team on board the Julietta D and at 7 pm the connection was made. The Coast Guard reported the situation remained stable since then, but the Sovereign would wait for better weather and daylight to begin the tow to Rotterdam.

MarineTraffic shows the Sovereign and the Julietta D are moving at a speed of about 4 knots while being escorted by the Multratug 18 and the tug Manta. They are not yet headed in the direction of Rotterdam.

UPDATE 11:50: The tugs The tugs Sovereign, Multratug 18 and Manta are on their way with the Julietta D to the port of Rotterdam.

The  Royal Netherlands Sea Rescue Institution (KNRM) also deployed rescue boats to the Julietta D yesterday, and the Koos van Messel remained on site to monitor the vessel while it was adrift. The KNRM released footage of the vessel in the Tweet below.