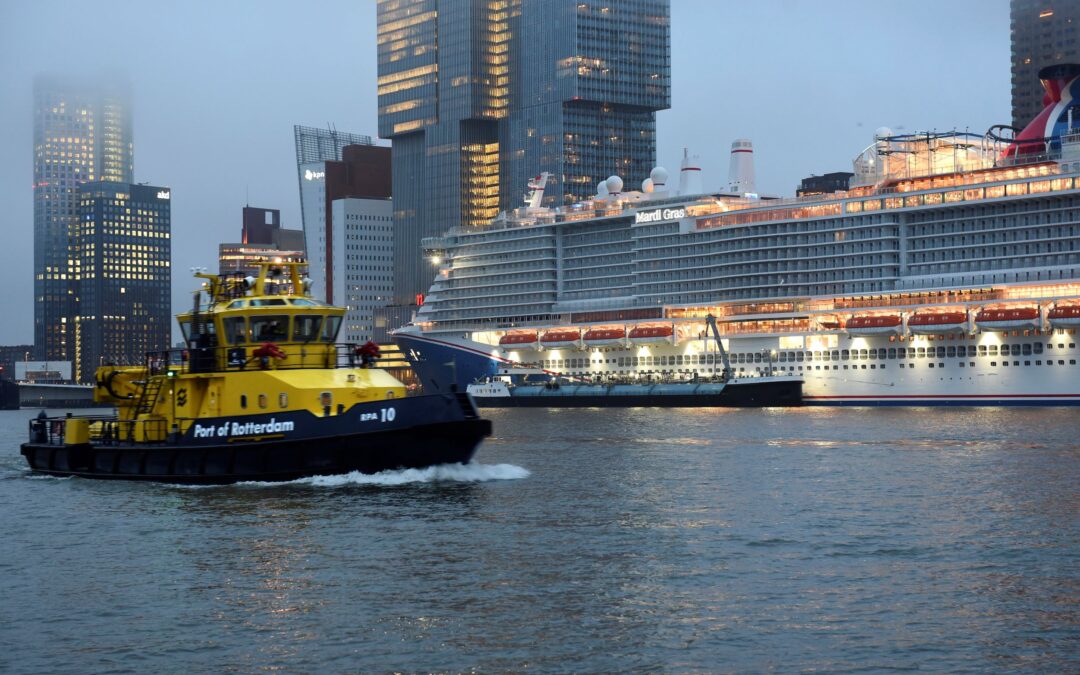 The Port of Rotterdam received almost 29,000 vessels in 2021, up by about 700 compared to the previous year. The number of accidents increased from 122 to 144. Most of these involved hasty mooring and resulting parking damage, according to the port’s harbour master René de Vries.

The Harbour Master’s Division of the Port of Rotterdam Authority says the pandemic did not jeopardise the continuity of services.

As a result of the pandemic, fewer inspections were conducted, but these were focused more specifically. This led to a comparatively higher number of findings. Some 462 tickets were issued, 76 of which to pleasure craft.

The number of accidents – half of which involving only parking damage (67) – increased from 122 to 144. Three of these were serious: a sea-going vessel hit the Caland Bridge, an inland vessel grazed a sea-going vessel in the Eemhaven, and a tug capsized in the Bocht van Esch near the Van Brienenoord Bridge.

Harbour master René de Vries looks back on the second Covid year with satisfaction: ‘I am proud of my colleagues. This second corona year, our services were not jeopardised either, and the port remained easily accessible throughout the year.’

‘2021 was also a safe year. 144 incidents during about 800,000 vessel movements is not a high number, although the increase in accidents is not gratifying. Most of these were caused by hasty mooring. Seafarers are on board for longer stretches of time, and much is demanded of the crews. This calls for extra vigilance on our part, for the pandemic is anything but over,’ the harbour master adds.

The work of the Harbour Master’s Division was dominated by the Covd-19 pandemic in 2021 as well. Every now and then, the work was organised differently because of it.

Meanwhile, the Maritime Declaration of Health (MDoH) has been automated. Quite an improvement, according to the Harbour Master’s Division, compared to the 25,000 manual assessments that were required last year. In 2021, the Port Authority and the Municipal Health Service (GGD) had daily consultations on the pandemic, particularly because crew members who had contracted Covid-19 or who had been in close contact with people who had tested positive for the disease, had to be received and relieved.

Consequently, hundreds of seafarers spent their isolation or quarantine in the Wings/Fletcher Hotel near Rotterdam Airport before they could travel home or continue their journey at sea. In some cases, vessel decontamination was so drastic that crews had to be accommodated in “botels”. Changes of crews could take place in Rotterdam as usual, from time to time causing additional hustle and bustle in the Wings/Fletcher Hotel.

Port Health Authority Rotterdam (PHAR) and this hotel entered into a cooperation in 2020. The PHAR is a partnership between several parties, including the Port Authority, the Rotterdam-Rijnmond Safety Region, and GGD Rotterdam-Rijnmond. Fighting infectious diseases (like corona) in the port of Rotterdam is an important task of the PHAR.

The Port Authority was among the initiators of the strategy to give seafarers access to vaccination. Since 15 June 2021, almost 25,000 vaccinations (with the Janssen vaccine) have been administered to seafarers. More than half of these took place in Rotterdam. The booster campaign (with the Pfizer vaccine) for seafarers started last week.