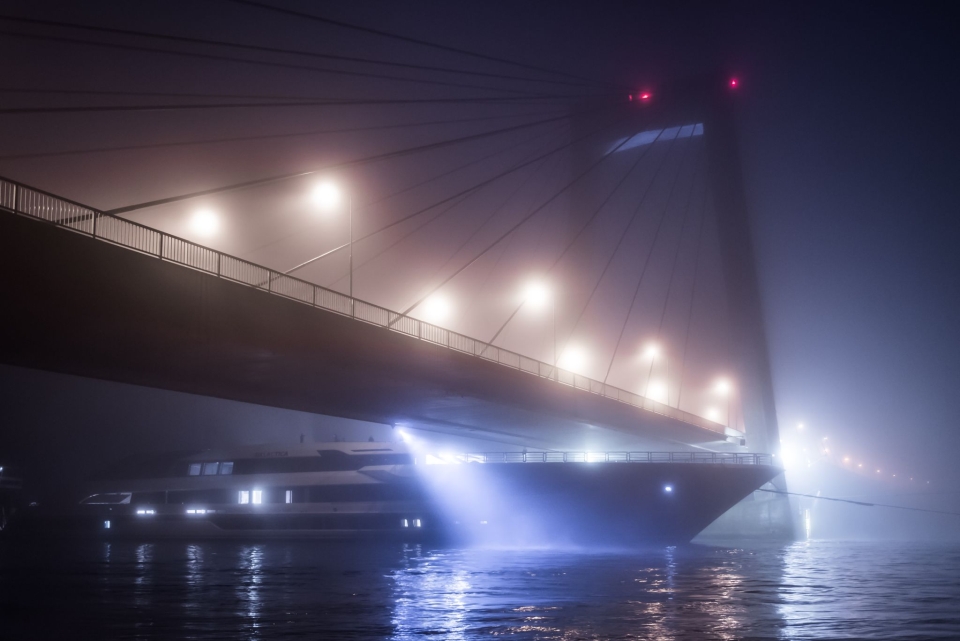 Heesen Yachts’ largest yacht to date, the 80-metre Galactica, is on its way to Harlingen for completion and sea trials. Yet, after first not being able to pass under a bridge near Den Bosch due to high water levels, it subsequently faced the same problem near Heusden. Late last night, the yacht finally managed to pass, a feat Heesen calls ‘business as usual’.

The 80-metre all-aluminium Project Cosmos, now known as MY Galactica, began its maiden voyage on Saturday, 8 January by passing through the tight lock in Macharen. With only 15 cm of clearance on each side, Heesen had to wait for a calm day with no wind.

Water levels proved too high, however, to pass under a railway bridge near Den Bosch. A second attempt was successful, but on Monday morning the transport was disrupted again when it could not pass under a bridge near Heusden. Some thought the yacht’s close encounters with the bridges were near misses, but Heesen Yachts has explained pulling the boat under the bridge is part of the procedure to take precise measurements.

Watch a video by Heesen of the transport and the yacht being pulled under a bridge below.

According to Heesen, clearance is often particularly tight when passing under bridges. That is why beforehand, the company performs physical measurements. Heesen: ‘These are paramount, especially now that the river waters are higher than usual.’

Such measurements were also performed for the Hedelse Spoorbrug (railway bridge) near Den Bosch and in Heusden at the Heusdensebrug. To perform these precise measurements, Heesen gently pulls the boat under the bridge to the exact point that must be measured. The yacht builder installs a measuring device at the front of the sundeck, with the same height or dimensions of the highest point of the yacht. Afterwards, the real time tolerances are determined with a laser beam to the bridge, to ensure the yacht passes underneath in the right amount of time.

Heesen point out that the company is used to taking its boats to the North Sea via canals and rivers: ‘These operations are normal procedures when dealing with inland cruising with luxury yachts of this size. Waiting for the tide to fall is nothing but business as usual.’

Galactica finally passed the bridge at Heusden late last night (10 January) when the yacht had 12 cm clearance. In the end, it did not go entirely smoothly. Local news channel Omroep Brabant reports the yacht hit one of the lamps under the bridge when passing under it. Heesen’s spokeswoman told the news channel this involved a small lamp and that the yacht itself was not damaged.

At 80 metres, with 1700 GT and a top speed of almost 30 knots, the Galactica is the biggest and fastest all-aluminium yacht ever built. Heesen launched the superyacht with yard number 19480 at its shipyard in Oss on 19 November. The yacht offers accommodation for twelve guests in six staterooms.

What makes Project Cosmos so impressive is its immense size combined with a remarkable top speed of almost 30 knots. This is achieved thanks to the lightweight and low-drag hull design, an iteration of the Fast Displacement Hull Form devised by van Oossanen.

Picture (top): The Galactica passing under the Heusden bridge (by Heesen Yachts/LinkedIn).