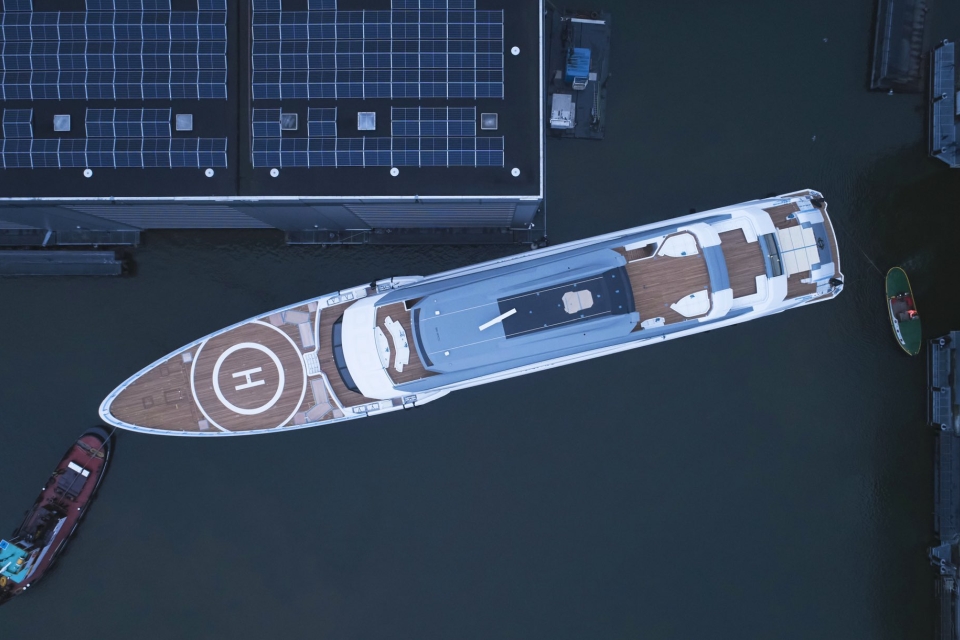 On Saturday, Heesen Yachts’ largest yacht built to date, the 80-metre Galactica, left the building site in Oss for Harlingen to undertake sea trials. However, once reaching a railway bridge near Den Bosch, water levels proved too high for the yacht formerly known as Project Cosmos to pass. This morning, the transport got stranded again, but at another bridge.

The transport did not come into contact with the bridge on Saturday, but had to turn back to wait for lower water levels. A video of the operation was shot by Ron van Zijl and posted on Facebook (watch below).

Dutch newspaper BN De Stem reports that the transport continued this morning (10 Jauary) and managed to pass the railway bridge, but had to abort its journey once again near Heusden. Water levels were once again too high to pass under a bridge there. According to Marine Traffic, the transport is currently waiting in the Stapelloophaven near Heusden.

The Galactica is being escorted by tug Broedertrouw 14 and pusher tug Pieter van der Wees. It is as yet unclear when the transport will continue. Its next destination is Dordrecht, from where the yacht will continue on to Harlingen.

At 80 metres, with 1700 GT and a top speed of almost 30 knots, the Galactica is the biggest and fastest all-aluminium yacht ever built. Heesen launched the superyacht with yard number 19480 at its shipyard in Oss on 19 November. The yacht offers accommodation for twelve guests in six staterooms.

What makes Project Cosmos so impressive is its immense size combined with a remarkable top speed of almost 30 knots. This is achieved thanks to the lightweight and low-drag hull design, an iteration of the Fast Displacement Hull Form devised by van Oossanen.

Media report the yacht comes at a price tag of about 100 million euros.

Picture (top): The Galactica leaving the building hall in Oss on Friday 7 January (by Heesen Yachts).

Rijkswaterstaat shared some footage of the transport underway this morning: