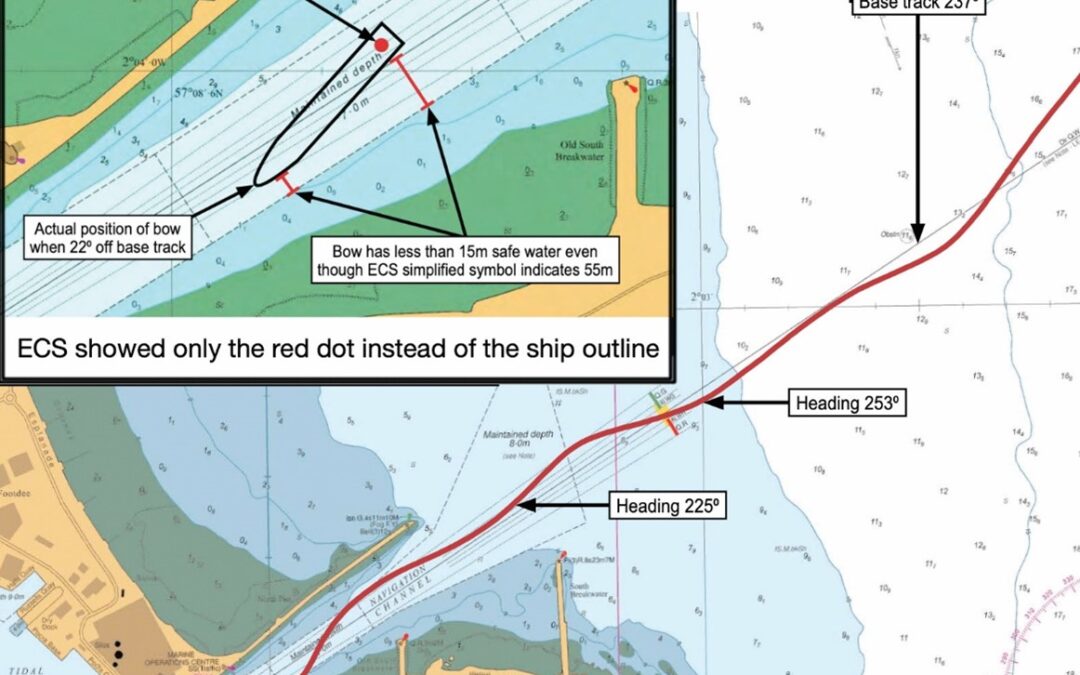 Blind pilotage requires not only a detailed plan, but information inputs on the state and position of the vessel in real-time. And the detailed plan must be a shared plan. The Nautical Institute gives this advice in its latest Mars Report, in which it describes a ferry that grounds in near zero visibility.

A ferry was en route for its destination port. The passage plan had recently been used on three previous voyages and took the ferry from berth to berth. After departure, the master discussed the following morning’s entry into the arrival port with the officer possessing the destination port pilotage exemption certificate (PEC). They agreed that the PEC holder would handle the vessel’s approach and berthing, with the master in a supporting role. Both officers then had a ten-hour rest period.

Wind and sea conditions were calm. Visibility was two to four nm with some patches of fog visible towards the coast. The PEC holder arrived on the bridge and began preparing to take the con for harbour entry. He set up the ferry’s radars, inserting a parallel index (PI) line on both displays for the entry course. The ferry’s planned route had been previously entered into the Electronic Chart System (ECS), although the chart displayed the vessel as a simplified symbol instead of a ‘to scale’ ship shape.

When the master arrived on the bridge the PEC holder used images on his mobile phone from webcams situated in the harbour to show that the turning basin had clear visibility. Content that conditions were suitable for entry, the master did not change the plan. With the vessel now making 13 knots, the PEC holder called VTS on VHF radio to request permission to enter the harbour. Permission was granted. About this time the PEC holder engaged hand steering and used the tiller arm to steer. He also reduced the vessel’s speed to 10 knots.

Initially, the PEC holder kept a relatively steady course, with the ferry slightly to the south of the navigation channel centreline. Realising that visibility was decreasing, the vessel’s third officer (3/O) completed the navigation in restricted visibility checklist. Although all the items on the checklist were marked as being complete, no helmsman was brought to the bridge and sound signals were not sounded as required. The vessel’s 3/O continued to plot fixes on the paper chart, and the bosun, stationed on the forecastle, acted as a forward lookout.

Soon, coastal fog began to further reduce visibility to about 150 metres. The master and PEC holder reduced the range scales on their radars to 0.75 nm, and later to 0.5 nm and then 0.25 nm as the vessel passed the breakwaters. The master asked the PEC holder if he was sure he wanted to continue, and the PEC holder said that he was.

As the vessel approached the harbour entrance, the PEC holder steered a heading of 250° (COG of 253°), tracking to the north of the planned course of 237° along the centre of the harbour’s navigation channel. Prompted by the master, who was using the S-Band radar and looking at the Electronic Chart System (ECS) display, the PEC holder altered heading to 225°. Soon, the vessel came within 10 metres of the planned track as it passed the fog-obscured south breakwater, and the PEC holder altered the ferry’s heading to 234°. During this time, the 3/O plotted positions on the paper chart.

The vessel was now fully in the navigation channel, and the PEC holder reduced speed to dead slow, which gave 6.5 kts over the ground. The PEC holder altered the vessel’s heading to 245°, and the ferry again moved north of the centreline and to the very edge of navigable water to the north. The master and PEC holder then saw the north breakwater and realised they were heading into danger.

The ferry grounded at 6.5 kts, raking along its port bow and port side before coming to a stop on the southern edge of the 70-metre-wide channel. Hull, propellor and rudder damage on the port side required repairs that kept the ferry out of service for four weeks.

The official investigation found, among other things, that the grounding was due to the bridge team losing situational awareness in thick fog.

Another finding was that the use of one parallel index (PI), as in this case, was insufficient for safe navigation in near zero visibility. Multiple PIs to display safety limits, effectively drawing a corridor down which the ship can be safely driven, would be more appropriate for such conditions. Additionally, by having only a symbol representing the ship on the ECS instead of a scale outline of the vessel, important safety information such as the swept breadth within the channel was not available to the bridge team.

The three case studies in Mars Report 349 (202153, 202154 and 202155) have some remarkable differences, but also some striking similarities. In two of the three cases, an electronic chart was available, but not used effectively or could not display the vessel in an appropriate manner.

Blind pilotage requires not only a detailed plan, but information inputs on the state and position of the vessel in real-time. And the detailed plan must be a shared plan, such that all of the bridge team have the same mental model of the passage plan and manoeuvre.

What these case studies demonstrate is how quickly and definitively a person’s spatial orientation and situational awareness can be compromised in near zero visibility if the proper information is not available or is not consulted. Finally, blind pilotage takes practice – best do this when the weather is good to hone your skills.

This accident was covered in the Mars Reports, originally published as Mars 202155, that are part of Report Number 349. A selection of this Report will also be published in SWZ|Maritime’s December 2021 issue. The Nautical Institute compiles these reports to help prevent maritime accidents. That is why they are also published on SWZ|Maritime’s website.