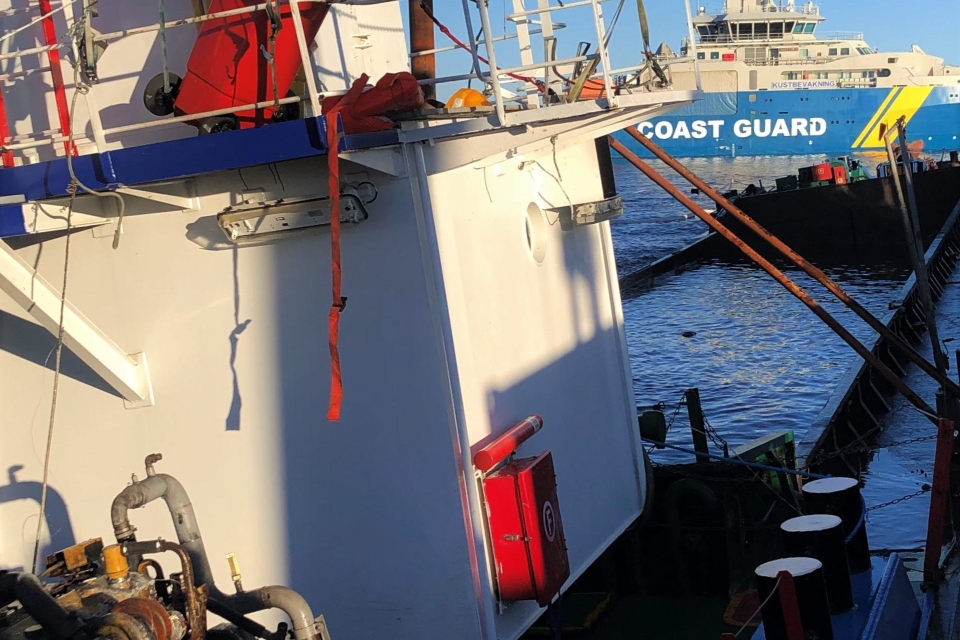 On Friday, Danish salvage company J.A. Rederiet succeeded in righting and securing the capsized splitbarge Karin Høj. The vessel had capsized after colliding with the cargo vessel Scot Carrier on Monday 13 December. A little bit of oil was released during the righting operation, but this did not require further action, according to the Swedish Coast Guard.

The Danish ship Karin Høj collided with cargo vessel Scot Carrier early Monday morning at around 3:30 am (local time). The collision occurred between the Swedish city Ystad and the Danish island of Bornholm in the Baltic Sea. The Karin Høj capsized as a result. One of its two crew members was found dead inside the ship. The other remains missing.

Two crew members of the Scot Carrier were arrested on suspicions of intoxication. The Swedish Public Prosecutor’s office has decided to lift the arrest of one of them, a Croatian citizen, although suspicions remain. On Thursday, 16 December, the prosecutor asked the arrest of the second crew member of British nationality to be extended. In addition to intoxication, he faces charges of causing death by gross negligence.

Already at midnight, the night before Friday, work began on rescuing the capsized ship, which had been anchored outside Simrishamn since Wednesday. According to Maritime Denmark, J.A. Rederiet performed the salvage using its multipurpose salvage vessel SusanneA and its floating crane GM700.

After righting the ship, only a small amount of oil could be seen on the water surface next to the ship. The Coast Guard reported that the measures taken so far have prevented a larger oil spill.

‘The salvage went according to plan,’ says rescue leader Staffan Ljungqvist of the Swedish Coast Guard. ‘The fact that oil comes out in connection with changing the position of a sunken ship is almost unavoidable. What we can see is such a small amount that no further action is necessary. The ten cubic metres of diesel that are on board are left in the fuel tanks.’

Once the salvage company had received all the necessary permits from Denmark, it took the Karin Høj back to Denmark on Saturday morning.

Picture by the Swedish Coast Guard.