‘Exposed bedrock could have caused holes in MS Estonia’s hull’ 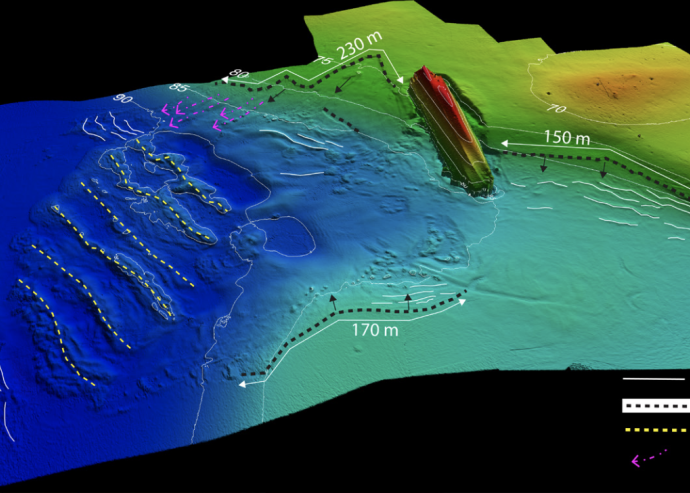 In July, Stockholm University conducted a survey of the MS Estonia wreck site and documented the conditions of the sea floor. The report states, among other things, that exposed bedrock has been identified next to where the two major holes in the ferry’s hull are found along the northern side of the wreck.

The ferry Estonia sank on 28 September 1994 during a heavy storm in the Baltic Sea on its way from Tallinn to Stockholm. 852 people lost their lives. It was the largest European maritime disaster since the Second World War.

Earlier research conducted a few years after the catastrophe showed that the Estonia probably went down due to problems with the bow visor, although all sorts of alternative theories about the cause continued to circulate. These range from a collision with a submarine to an explosion on board.

Over the summer an inital assessment took place in which the geology of the seabed around the wreck of Estonia was studied in cooperation with Stockholm University. A bathymetric or three-dimensional image of the seabed was created. The University has now released the report of its investigation.

Also read: Investigations into the sinking of the Estonia so far

Stockholm University surveyed the wreck site with research vessel RV Electra between the 8th and 15th of July, 2021. In its report of the investigation it says that it has found that the exposed bedrock is likely granite or syenite. It was identified next to where the two major holes in MS Estonia’s hull are found along the northern side, approximately 69 metres and 89 metres from the stern respectively. Denting in the hull is visible where it comes close to exposed bedrock in-between the two major holes.

On its website, the Estonian Safety Investigation Bureau says that the data show that the bow and stern of the wreck are in soft clay and that the centre of the ship is lying on a rock with a harder bedrock, probably granite. The wreck is located at a depth of 60-80 metres, the bow and stern are at significantly different heights. The wreck tilt is 133.7 degrees, which is significantly more than the originally measured tilt.

The Estonian Safety Investigation Bureau has also confirmed the holes in the hull, which were detected by a 3D scanner and an underwater robot. ‘The damaged area is at least 4 metres wide and 22 metres long, but its exact extent cannot be determined as the damage is partly below the hull. The damage is on the outer plating, but it is also transmitted to the ship’s internal structures. We also found damage to the left side and stern of the wreck.’

Main survey to start next spring

The organisation says that further studies and calculations are needed to determine the exact cause of the damage detected so far in what they call has been an initial assessment. The hinges of the wreck’s ramp are broken or deformed and the bow ramp is off, access to the car deck is open. The following studies will also investigate what caused the bow ramp to detach from its stationary fastenings.

The main survey of the investigation is to take place next spring. This study will include a ferromagnetic study, a laser study and a photogrammetric study. The Estonian Safety Investigation Bureau is digitising Estonia’s drawings and creating a digital “twin” of the ship to perform various simulations of the shipwreck. The final survey is expected to be completed next autumn.

The organisation stresses that three quarters of the work is still ahead. ‘We are no longer at the very beginning, but it is too early to draw important conclusions. Regardless of the findings of basic research, it is clear that we have new knowledge, that it is coming to fruition, and that significant technological developments over the last quarter of a century will make a significant contribution to acquiring it.’