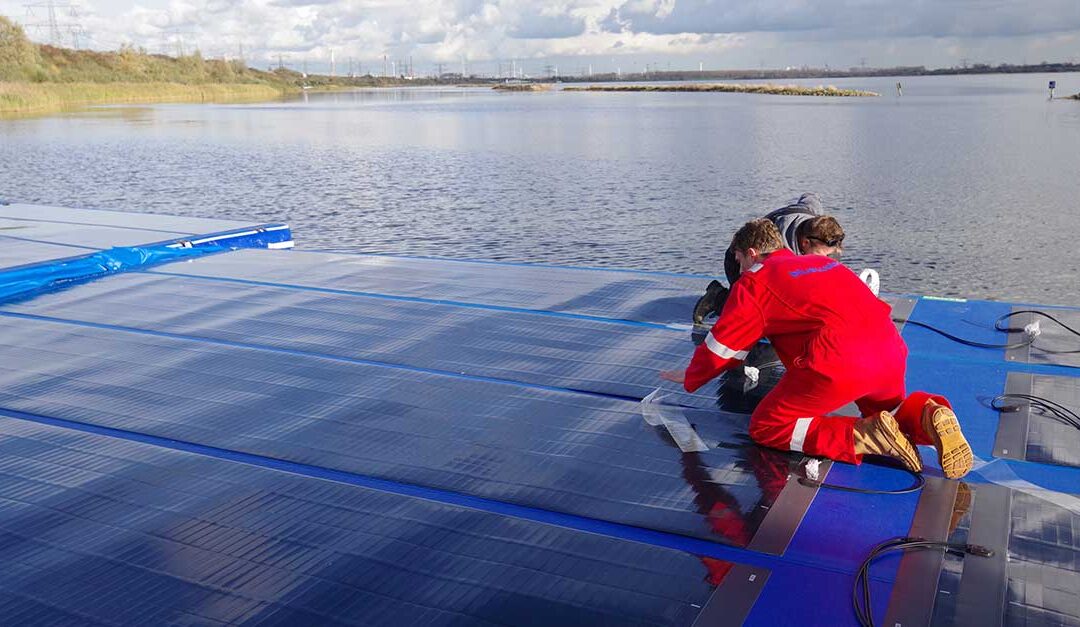 A consortium led by TNO has launched a study on new, floating and flexible solar energy systems. The system of flexible floating units with flexible solar panels mounted on them has been installed over recent days in the Fieldlab Green Economy Westvoorne in Oostvoornse Meer, a lake near the Maasvlakte, a harbour and industrial area close to Rotterdam.

The pilot, which will run until summer 2022, is the first step in the creation of economically viable offshore photovoltaic systems. In the study, which officially kicked off today (29 November), the consortium is looking at various aspects in the field lab, such as the energy yield of the flexible solar panels, the behaviour of the floating units when faced with waves and strong winds, the growth of organic material on the units, and economic viability.

Solar on water is expected to make a key contribution to the energy transition. The Netherlands is forecast to generate 200 gigawatt-peak (GWp) of solar energy in 2050, including 25 GWp on solar panels on inland waterbodies and 45 GWp at offshore solar energy.

There is still work to be done in order to achieve that, says Wim Soppe, researcher at TNO (Netherlands Organisation for Applied Scientific Research) and manager of the Solar@Sea II project: ‘Solar power at sea or offshore PV does not yet actually exist. It is technically very challenging to install large floating systems with solar panels at sea and keep them operational for decades. In addition, due to the expense of material used for heavy, rigid floats, it is often difficult to make these systems economically viable. This new concept requires a lot less material and we therefore have high hopes that it will turn out to be a lot cheaper.’

Bending with the waves

The concept consists of two floats measuring 7 x 14 metres topped by 20 kWp of solar panels. What is special about the structure is that both the solar panels and the floats are made of a flexible material (thin-film PV) developed by the consortium.

This application enables the floats and the panels to bend with the movement of the waves. They offer less resistance to the waves, so that the floats and the anchoring can be lighter and can therefore be produced more cheaply than with rigid floats.

Next step: system on the North Sea

After completing this project, the next step is to build and install a system on the North Sea. The initial aim is to use the system to test an efficient installation and maintenance method that the consortium is already developing. This is important because installing and maintaining floating systems at sea is considerably harder than on land, which can make it a lot more expensive.

The next ambition is to build a commercial system of 1-5 MWp around 2024, which can be installed and electrically linked up with one of the new wind parks on the North Sea. Because solar and wind energy production have little overlap in time, there is no need to run additional cables to land.

The project is being executed by a broad consortium in which TNO is partnered by Bluewater Energy Services, Genap, MARIN, Endures, and Avans University of Applied Sciences.

Bluewater is responsible for anchoring the system; Genap developed the flexible floats; MARIN tested the hydrodynamic properties of the floats in its model test basin; Endures is studying organic growth on the panels and drivers, and how to prevent it; and Avans is developing maintenance and recycling strategies for this concept.

This study is an important step in the roadmap drawn up by the National Consortium Sun on Water. The Solar@Sea II project is being carried out with a Top Sector Energy subsidy from the Ministry of Economic Affairs and Climate Change. The Fieldlab Green Economy Westvoorne is made possible by TNO and the Innovation Programme Energy & Climate, an initiative of the Metropolitan Region Rotterdam Den Haag, InnovationQuarter and the Province of Zuid-Holland.