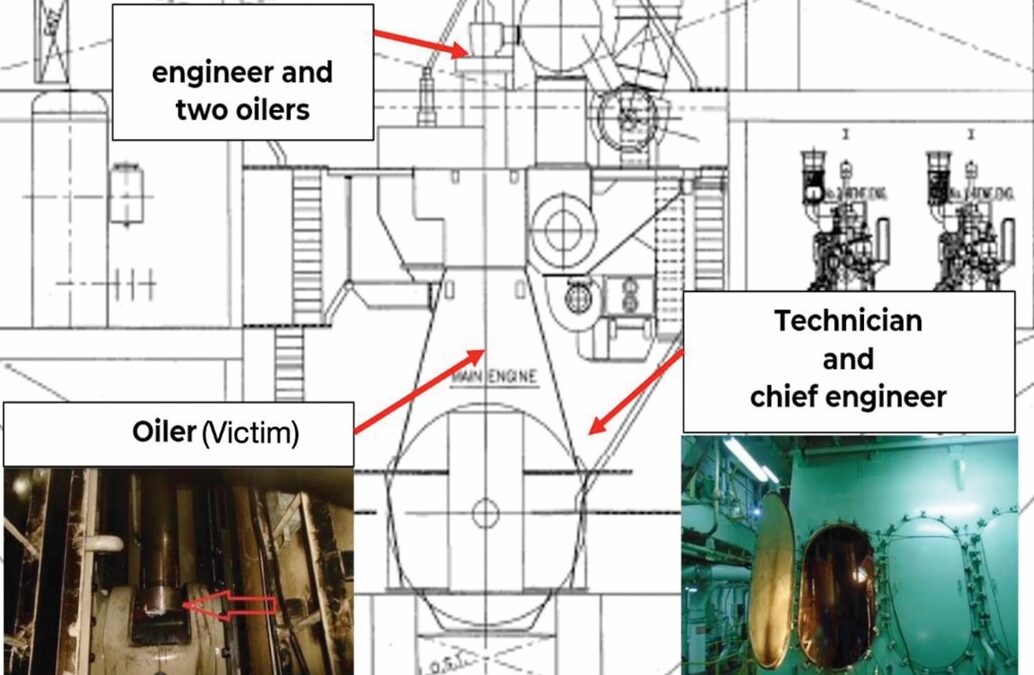 An engine crew member recently died during piston replacement. The Nautical Institute discusses the incident in its latest Mars Report and warns to always consult the engine manufacturer’s instruction manual, to conduct a proper risk assessment and to communicate in the vessel’s working language throughout the operation.

While at anchor, the engine crew were overhauling a main engine piston. The removal of the piston and stuffing box and the overhaul of the piston were completed without incident.

The task had been started in the morning, and in the late afternoon, the crew commenced the re-installation process. This last but critical phase of the overhaul would take about an hour, and included using the piston lifting tool. The lifting tool has two stationary claws and one adjustable claw. The claws sit in the piston lifting grooves on the top of the piston.

The two engineers engaged in the work each had a portable VHF radio and they communicated to each other in a language not understood by the chief engineer. Although he was supervising the operation, he himself did not have a VHF radio.
It took about an hour to stow the stuffing box. Once it was tightened in position, the chief engineer instructed the crew to clear all the tools, clean the surfaces and exit the crankcase. Both the engineer and the technician exited the crankcase but the oiler remained inside to clean up the area.

Soon after, the chief engineer instructed an engineer to turn the engine using the turning gear. The other engineer dropped the piston lifting tool. A loud noise was heard; the piston had dropped inside the crankcase. The oiler who had remained inside the crankcase was found unresponsive in the sump tank of the main engine. Emergency procedures were taken but the oiler was declared deceased before his arrival at the hospital.

The investigation subsequently found, among other things, that:

This accident was covered in the Mars Reports, originally published as Mars 202148, that are part of Report Number 348. A selection of this Report will also be published in SWZ|Maritime’s November 2021 issue. The Nautical Institute compiles these reports to help prevent maritime accidents. That is why they are also published on SWZ|Maritime’s website.