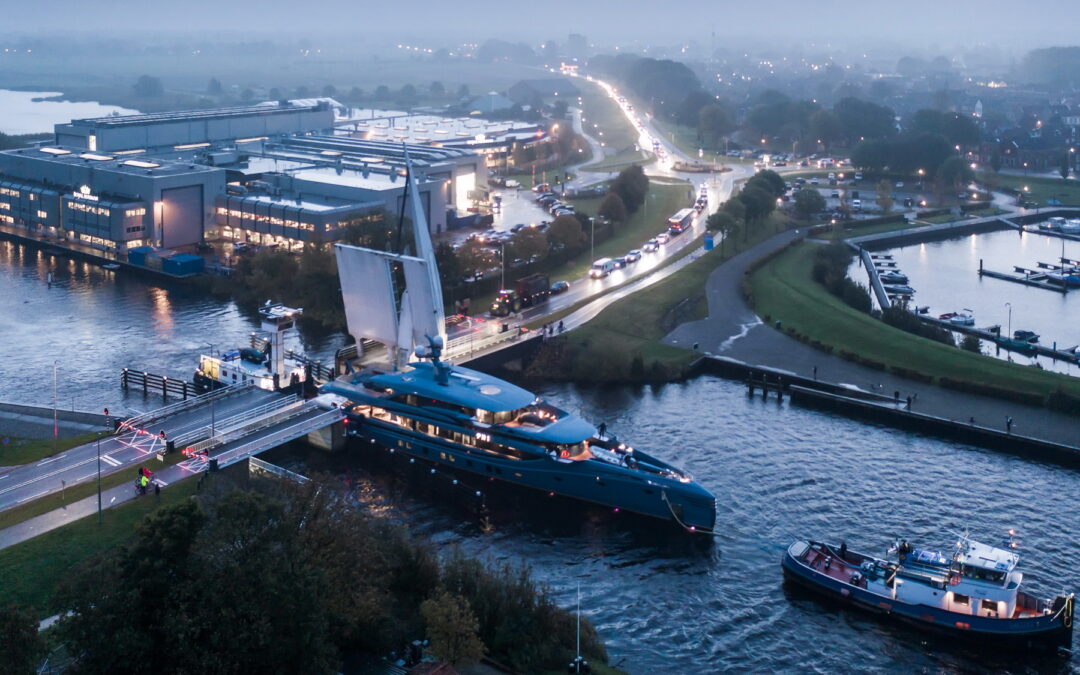 Royal Huisman project 403, Phi, has left the shipyard’s newbuild facilities in Vollenhove for Royal Huisman Amsterdam to start sea trials. Developed and constructed below 500GT, 58.5-metre Phi is by far the longest motoryacht in this category, based on current classification rules.

Phi is a motor yacht from the drawing board of Cor D. Rover, who has based the general concept, exterior design and interior layout on many in-depth conversations with the owner over a period of years. Phi’s (still mostly secret) interior design and styling are defined by the London-based studio Lawson Robb.

Its naval architecture is by Van Oossanen Naval Architects. Their specially developed Fast Displacement XL hull form allows the yacht to be long and sleek, yet still remain under the 500 GT mark. Royal Huisman‘s experience in aluminium construction is vital to creating such yachts as it makes it possible to maximise performance and efficiency through compact, lightweight and high strength engineering. In addition, the yacht builder’s ability to design and install complex operational systems in restricted volume hull areas further increases efficiency.

Complementing motoryacht Phi will be a 36-metre shadow vessel, Phi Phantom, which is constructed at Alia Yachts. Both have Cor D. Rover styling and a patented Van Oossanen Fast Displacement Hull, but its “make-up” will be a no-filler-matt-finish (albeit in the same color scheme as her big show-off sister).

PHI Phantom has been built to carry a 12-metre and 14-metre tender, an 8-metre sailing boat, six jet skis, a car and 60,000 litres of surplus fuel for the mothership, as well as bicycles, motorbikes, spare parts and a vast amount of storage and refrigeration.

Also read: Student visit to Royal Huisman: ‘Hybrid yachts are a market for the future’