Zim Kingston has lost 109 containers instead for 40 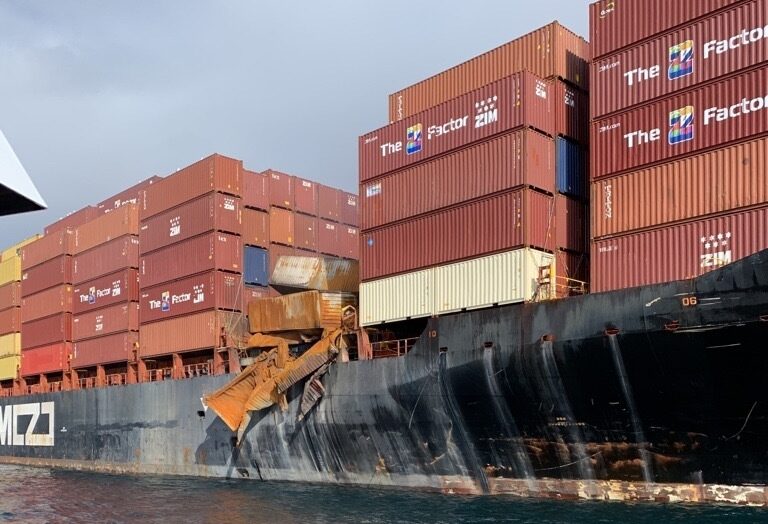 On 26 October, six firefighters and seven crew from the ship were able to board the Zim Kingston. The salvage master and team estimate it may take several days to fully suppress smoldering and fires inside the containers.

Once the fire is fully extinguished, salvage experts will secure the containers. Transport Canada inspectors will then inspect the ship and direct it to a port (not determined yet) for unloading and any further inspections. There may be changes to this process depending on the results of each step.

After the crew went on board, it became clear 109 containers were lost overboard. This number may change again as more information comes in. Contents of containers overboard include toys, clothing, automotive parts, industrial parts and furniture. The owner of the container ship, Danaos Shipping, is working with the Canadian Coast Guard’s Incident Command to find and recover the containers, but ongoing stormy weather and large swells continue to complicate their recovery.

Four containers were located on shore near Cape Scott yesterday (27 October). These containers have been identified, referenced against the ship manifest, and do not contain hazardous chemicals. It appears that at least one of the containers, containing refrigerators, has broken open. This information has been passed on to the ship’s owner, who has hired a contractor to recover the containers.

It is expected that some of the containers have sunk and the Canadian Coast Guard’s Environmental Unit will assess for potential impacts.

The fire erupted on board the container ship Zim Kingston on Saturday 23 October while it was sailing from South Korea to Vancouver, Canada, and close to its destination. Before that, the ship had already lost containers due to heavy weather. The Zim Kingston, which is chartered by ZIM and owned by Danaos Shipping, was built in 2008. It sails under the flag of Malta and has a carrying capacity of 4253 TEU. It is 260 metres long and 32 metres wide.