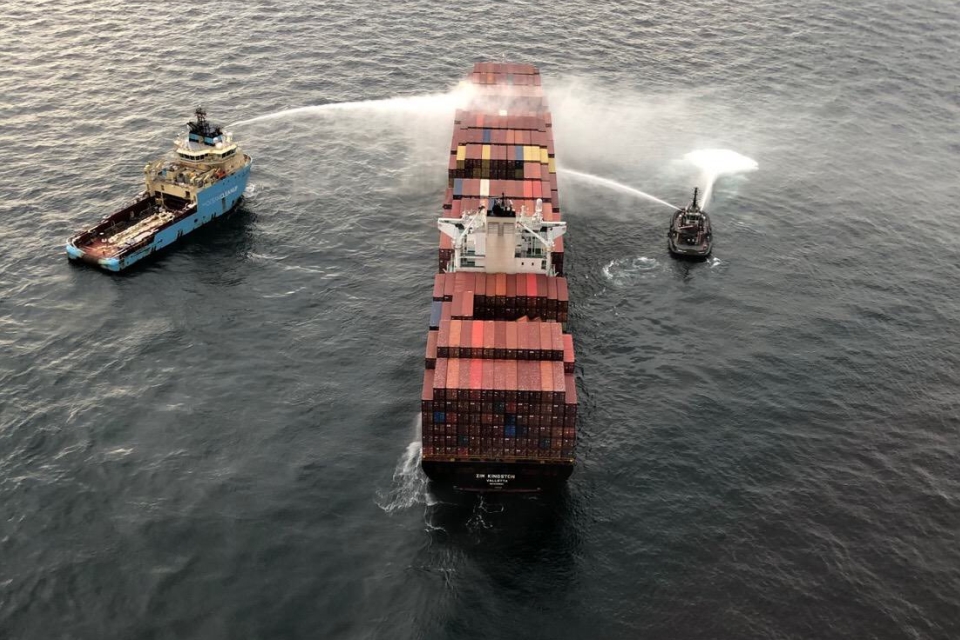 The Zim Kingston has remained stable overnight according to the Canadian Coast Guard. The salvage crew from Resolve Marine are on scene, but due to the current weather, have been unable to board the container ship. The weather also prevents the shipowner from recovering the containers that have fallen overboard.

The containers continue to smolder and boundary cooling – spraying water on the hull and on containers near the fire – continues, says the Coast Guard. There are currently no impacts to human health for residents of Greater Victoria, but Incident Command continues to monitor the situation.

The fire erupted on board the container ship Zim Kingston on Saturday 23 October while it was sailing from South Korea to Vancouver, Canada, and close to its destination. Before that, the ship had already lost forty containers due to heavy weather. The Zim Kingston, which is chartered by ZIM and owned by Danaos Shipping, was built in 2008. It sails under the flag of Malta and has a carrying capacity of 4253 TEU. It is 260 metres long and 32 metres wide.

The Canadian Coast Guard is cooperating with the US Coast Guard to track the movement of containers from the container ship. The containers are currently drifting approximately 12 nm east of Vancouver Island on a northwest trajectory, parallel with the island.

Current modelling indicates that the containers will not come ashore. However, if the situation changes, the Canadian Coast Guard ask people not to open the containers. Two of the lost containers contain chemicals that are hazardous to human health.

The current storm is currently impacting the owner of the Zim Kingston’s ability to recover the containers, but the Coast Guard continues to track and monitor the containers so that action can be taken when a window of opportunity opens.