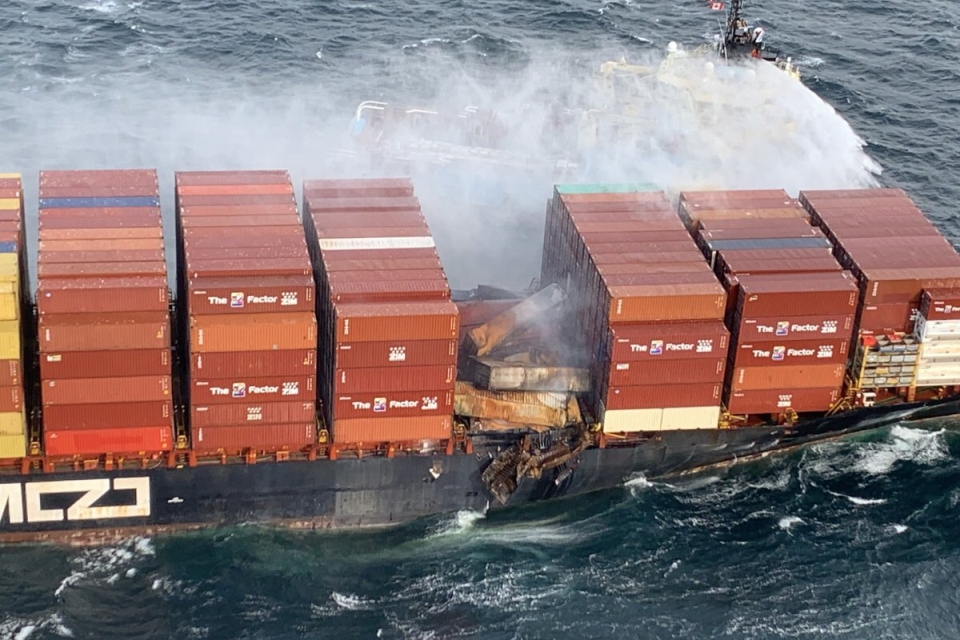 A fire broke out in ten containers on board the container ship Zim Kingston on Saturday 23 October. The fire erupted after the ship had already lost forty containers overboard in heavy weather. The Canadian Coast Guard has reported the fire has now been stabilised.

After the fire broke out, the Coast Guard evacuated sixteen of the 21 crew from the ship. The Zim Kingston had departed from South Korea and had almost arrived at its destination Vancouver.

Initially an emergency zone of 1 nautical mile was set up around the ship, but this was later increased to 2 nautical miles. The fire involved containers containing chemicals, but which type has not been revealed. The Coast Guard did say that they were cooling the hull by spraying cold water on it and that ‘due to the nature of chemicals on board the container ship, applying water directly to the fire is not an option.’

At the same time, the Coast Guard has been monitoring air quality both on the water and on shore. Late on Sunday, the Coast Guard announced the fire had been stabilised. Depending on the weather today (Monday 25 October), hazardous materials firefighters will board the ship to fight any remaining fires and ensure the fire is out.

During the night, the ship was continuously monitored by emergency tow vessels, tugs and the Canadian Coast Guard to ensure the safety of the remaining five crew and that the ship remains secured.

Both the US Coast Guard and the Canadian Coast Guard are trying to find and monitor the containers that were lost overboard. Some have been located, but salvaging the ones discovered will have to wait for better weather conditions, however.

Picture by the Canadian Coast Guard.