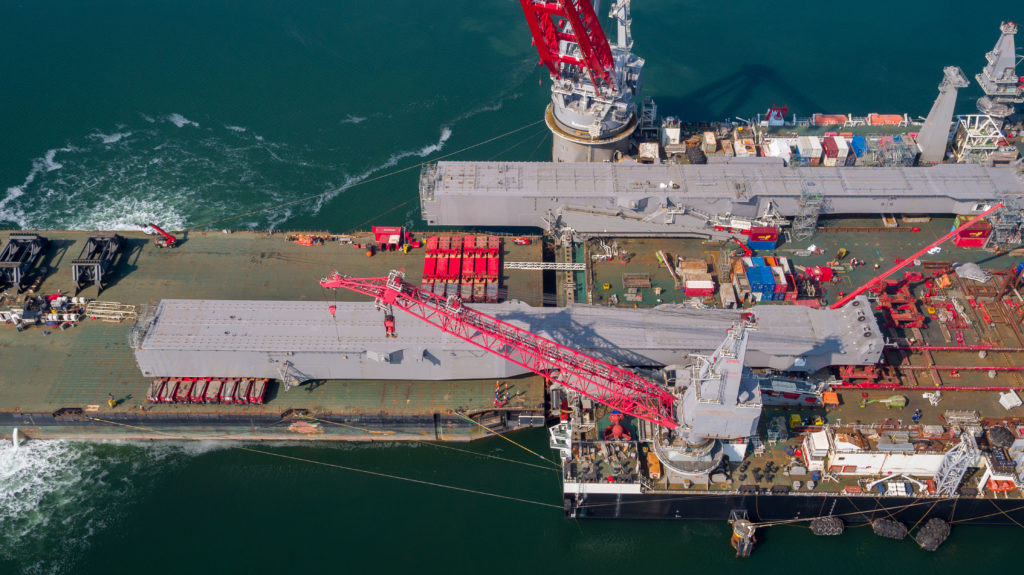 Two and a half years after the first steel was cut, the two colossus jacket lift system main beams are now in position on board Pioneering Spirit. Using self-propelled modular transporters and skidding systems, one by one, the beams were aligned and driven forward onto the aft deck.

The final move-in of the last few metres, to position the main hinges between the hang-off frames, was a meticulous task with millimetres of clearance either side of the 13-metre wide beams. Then came the most critical phase: aligning the four hang-off eyes with the beam’s two main hinges to insert the 1.3-metre diameter hinge pins. Watch a video of the operation below.

‘To perform this operation, the beams were placed on the same skid system that was used to position the New Safe Confinement dome over the fourth Chernobyl reactor two years ago,’ explains Florian Wasser, manager capital projects at Allseas. ‘With the ability to manipulate the position of thousands of tonnes within tens of millimetres, the pins went in accurately and smoothly. It was in this very moment that the design, fabrication and quality control of parts made and assembled across South Korea, China, Austria, Italy, Poland, the US and the Netherlands all checked out within microns of millimetres.’

The operation was carried out by the Pioneering Spirit’s crew and Mammoet with office assistance and completed within half the planned time.

In addition to the beams, many other systems and components manufactured across the globe were finalised over the past few months. These include the ballast box frame by Carope (China), the main hoist blocks by Asturfeito (Spain) and the grillages by Remazel (Italy), which are all on their way to Rotterdam. Delivery of these items kicks-off the final installation phase on board Pioneering Spirit.