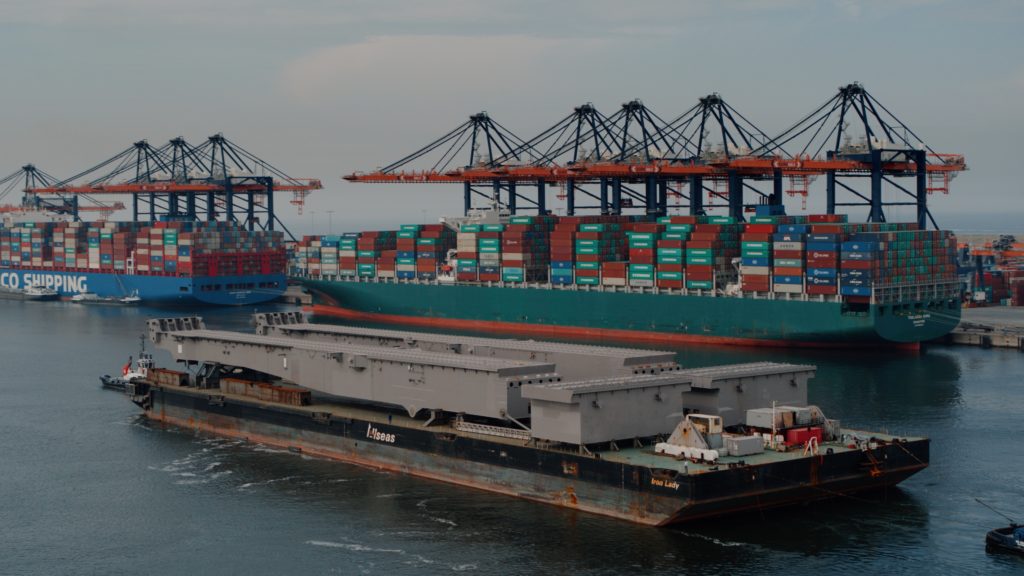 The two huge steel beams for Pioneering Spirit’s new jacket lift system have arrived in Rotterdam after a week-long tow from the fabrication yard in northern Italy. Now starts the challenge of installing these 6000-tonne mega steel structures on board the world’s largest vessel.

This highly complex operation involves skidding the beams, inch by inch, over the aft deck to a final resting place. Here they will be aligned and connected with the hang-off frame and upend system.

The contrast between beam size and installation tolerances is incredible. The final alignment requirements of the 170-metre beams is less than 2 millimetres. Over the next couple of weeks, Allseas engineers will support the vessel crew to execute the latest milestone in the realisation of the new lift system.

Allseas’ 200-metre-long and 57-metre wide cargo barge Iron Lady was used to transport the steel beams to the Pioneering Spirit. See a video and pictures of the transport below.

The jacket lift system is built to install and remove entire jackets up to 20,000 tonnes in a single lift. It can operate in hostile weather conditions and the new technology offers a safer and faster alternative to conventional systems.

The lift beams are the final piece of the puzzle. Once these are installed, all components will be connected, commissioned and tested. The complete jacket lift system is to be ready for the first projects in summer 2022.