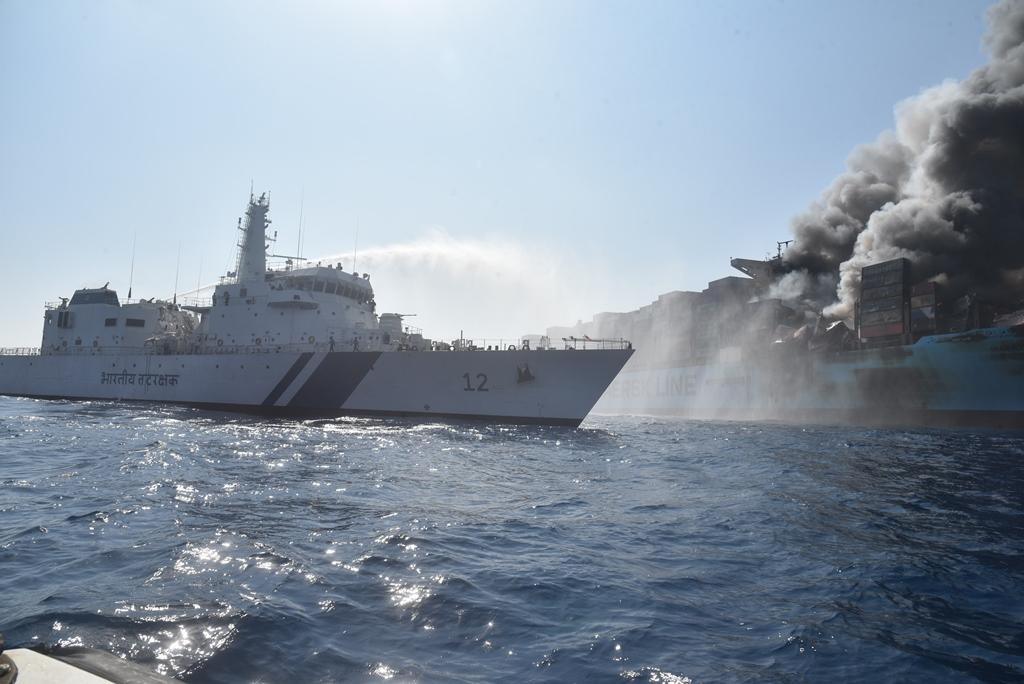 New ultra-large container vessels and possibly also passenger ships may have more unevaluated and unanticipated fire risks than current best practices have accounted for. The Nautical Institute issues this warning in its latest Mars Report in which it looks into the fire on board the Maersk Honam.

A very large, recently constructed container ship was loaded and underway in darkness when a smoke alarm sounded in number 3 cargo hold. With the master on the bridge, the chief mate went to the muster/fire control station. He was in charge of the Emergency Team, and besides mustering (including headcount) he would oversee the firefighting and boundary cooling operation. The master noted the apparent wind about four points on the starboard bow and adjusted the vessel’s heading to starboard to minimise the effect of smoke on the accommodation, but maintained speed.

On the starboard side main deck, crew closed all sixteen natural ventilation flaps for hold 3, but were unable to complete this task on the port side due to heavy smoke and heat. Some of the crew reported a strong chlorine-like smell while closing the ventilation flaps on the cross deck, and suffered some breathlessness with itchy burning sensations. About thirty minutes after the first alarm, the master opted to release the appropriate amount of CO2 into the hold for the safety of the ship and its crew, although the ventilation flaps on the port side could still not be closed. Boundary cooling continued on deck but copious amounts of smoke were coming from hold 3. Thirty minutes after the first release of CO2, the master ordered all non-essential crew to the bridge and ordered a second release of CO2.

About seven minutes after the second CO2 release, the water mist system in the engine room auto-activated, indicating that temperatures in the engine room were possibly elevated. Soon afterwards, the master ordered a distress call. All remaining crew were ordered to the bridge. About fifteen minutes later, the master had all of the remaining CO2 released into hold 3, but there was little effect.

Ten minutes after this, with the majority of the crew now in the wheelhouse, acrid smoke entered the space and created a panic reaction. Crew evacuated the bridge and broke up haphazardly into four groups.

Almost an hour after the evacuation of the wheelhouse, a group of seven crew and the master boarded the starboard lifeboat and successfully abandoned ship. Once in the water, they took on fourteen other crew that had already abandoned in a liferaft and another one from the water. Of the 27 crew, 23 survived although the one crew recovered from the water later was pronounced deceased.

The official investigation found, among other things, that no. 3 cargo hold contained a block stowage of 55 containers of sodium dichloroisocyanurate dihydrate (SDID). It is possible that the cargo in one or more of these containers underwent self-decomposition. The block stowage exacerbated the rate of reaction and heat production which resulted in the uncontrollable spread of the fire.

Also read: Self-ignition of cargo likely cause of fire on board Maersk Honam Also read: Shipping ever safer, but fires are cause for concern

Picture: Maersk Honam on fire (by the Indian Coast Guard).

This accident was covered in the Mars Reports, originally published as Mars 202115, that are part of Report Number 341. A selection of this Report has also been published in SWZ|Maritime’s April 2021 issue. The Nautical Institute compiles these reports to help prevent maritime accidents. That is why they are also published on SWZ|Maritime’s website.