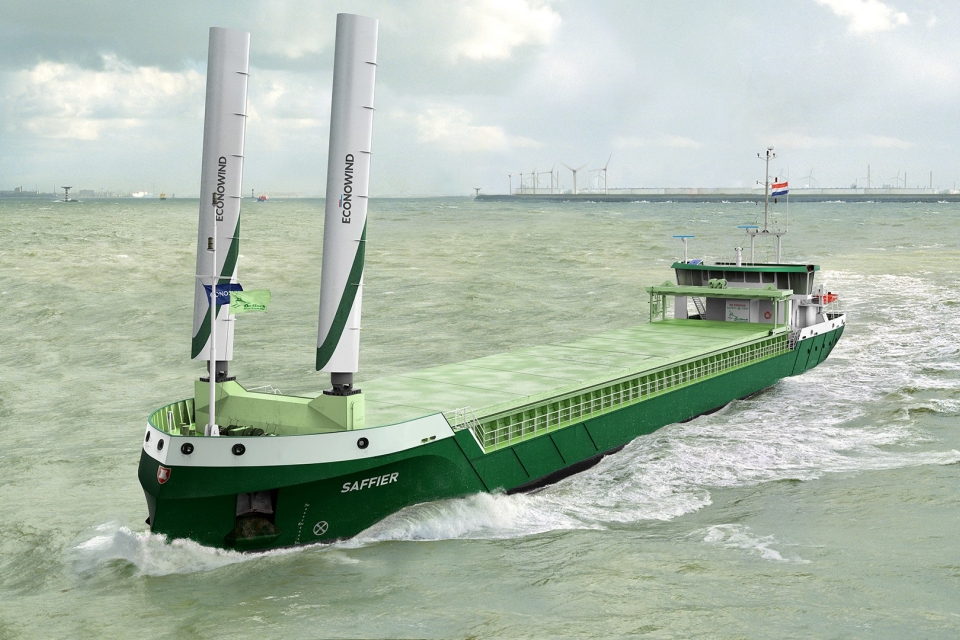 Last week, Conoship revealed construction had started on several of its new shortsea vessel designs. Now, it has become clear two of these vessels have been ordered by De Bock Maritiem. Holland Shipyards is responsible for building the 3600-tonne vessels, which are expected to halve CO2 emissions compared to similar vessels.

De Bock Maritiem, based in Alkmaar, the Netherlands, will use the diesel-electric vessels to transport dry cargo. Thanks to their low overall height, they are suitable for the Rhine river and inland waterways, or as the shipping company’s slogan says: ‘Non-stop from sea to river’. It is expected the vessels will enter service in 2024.

Compared to an average ship in the current European shortsea fleet of this tonnage, they will have as much as fifty per cent lower emissions. In addition to the emissions figures, the overall energy efficiency of the new ships will already be some thirty per cent higher than the international standard – the so-called Phase 3 requirement of the Energy Efficiency Design Index – effective from 2025. This is achieved through very low power, diesel-electric propulsion and optimised propeller and hull shapes, among other things.

‘Thanks to our ship colours, we have been sailing “green” for years, but with the new additions, we will soon start seeing “green” reflected in our emissions figures,’ says Gilbèrt de Bock, managing director of De Bock Maritiem.

The ships are smaller than 5000 GT, the limit that may be used for EU Emissions Trading System (ETS). De Bock says it is important that ships between 400 and 5000 GT also join in so that small ships also contribute to the reduction of CO2 emissions.

As already revealed by Conoship, their designs are ready for wind-assisted ship propulsion (WASP) through the use of Econowind’s Ventifoils. The artist impression above also shows the vessel equipped with them. De Bock says that it is indeed their intention to place these on the ships, but adds that nothing has been committed at this stage.

Due to the modular design, the ships will be prepared for the energy transition. The generators are located in an easily accessible space on the upper deck, making the ship well suited for a future conversion to another fuel. The “E-room” or “Propulsion room” at the bottom of the ship, where in conventional ships the engine room is situated, remains unaffected in such a conversion, as the propulsion train itself is and will remain electric.

The two ships will sail under the Dutch flag. The shipping company, which now also has offices in Indonesia and Belgium, considers Dutch bonding a core value of the company.

The names of the ships have not yet been announced, but in line with previous ships, they will be named after the gems of Jerusalem’s city wall as mentioned in the book of “Revelations” by John.