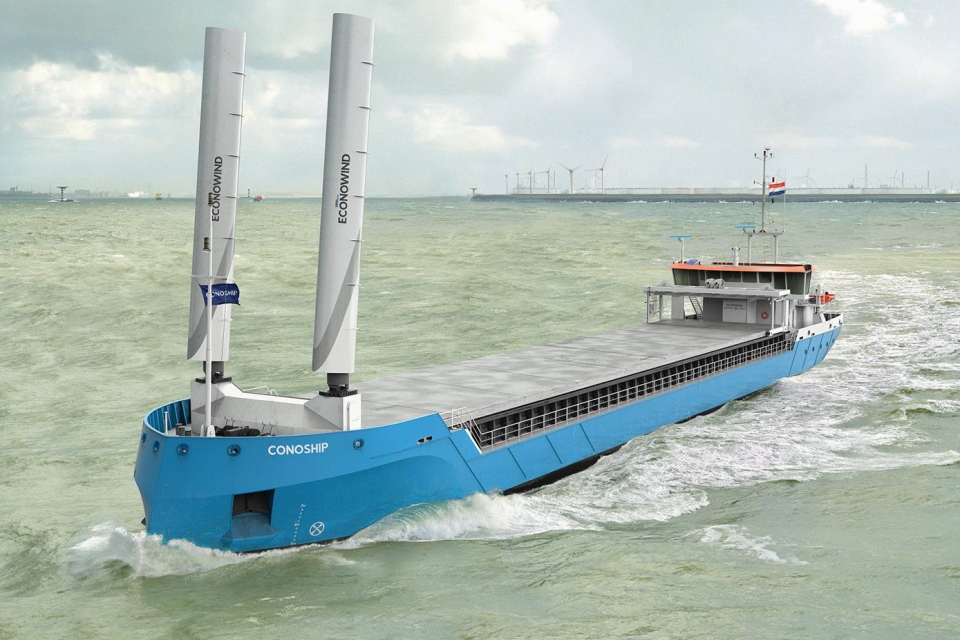 Production of a next generation short sea vessel developed by Conoship International Projects has started at Gelibolu Shipyard in Turkey. The diesel-electric and future-proof 3600-TDW general cargo vessel is suited for sea-river operations. Holland Shipyards will build five similar vessels.

With its well thought out diesel-electric propulsion system, enlarged propeller in combination with a ConoDuctTail and optimised hull lines, its fuel consumption will be best in class, especially in wind and waves. To further improve its performance, the design is ready for wind-assisted propulsion, as it is prepared for the placement of Econowind VentiFoils, which would reduce the fuel consumption and CO2 emissions by about ten per cent annually, depending on sailing route.

The design is highly future-proof. The Energy Efficiency Design Index (EEDI) of the vessel as calculated as a diesel-driven vessel is already below the phase 3 requirements. Additional elements of the design arrangement facilitate a switch to future fuels.

‘For example, take off the generators and replace them with a methanol power generator set and then put in methanol tanks as well, or take them off completely and put on liquid hydrogen tanks and fuel cells,’ explains Jan Jaap Nieuwenhuis, Managing Director at Conoship International. ‘All these redesign possibilities were taken into account from the beginning of the conceptual design process.’

The new design concept looks set to give the industry a boost, while also reducing CO2 emissions from shipping. Conoship International Projects is working on a number of variants of the ship, including a 3800-TDW and 5800-TDW version. A 5800-TDW new design concept is in development and will be brought to market soon.

The ceremonial start of the construction of Gelibolu Shipyards’ building number NB60 took place on November 24, 2022 at the Gelibolu Shipyard in Turkey. The steel cutting ceremony was attended by Gelibolu District Governor Bekir Arabacı, Gelibolu Mayor Münir Mustafa Özacar, Gelibolu Shipyard’s board of directors and employees.

This vessel will be delivered in 2023.

Two more of these 3600-TDW diesel-electric propulsed cargo vessels will be constructed by Holland Shipyards Group in the Netherlands. An enlarged version, tween deck fitted, 3800-TDW vessel will be built three times for another undisclosed owner.

Construction of these five cargo vessels is planned for 2024.