Maritime students reflect on future for fisheries in three-day competition 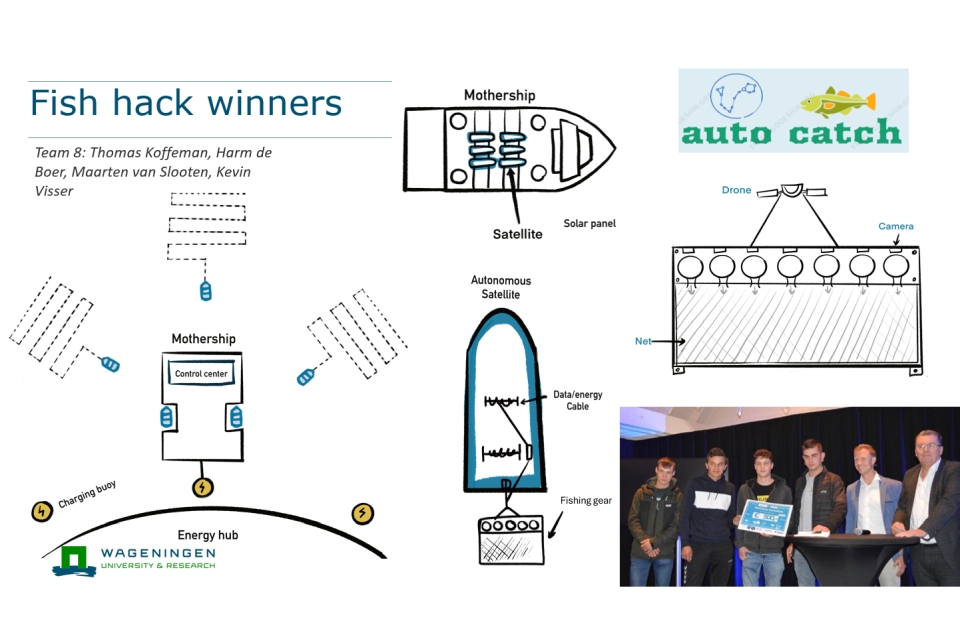 A possible future for fisheries as thought out by maritime students: a fishing mother ship with four drone-like satellite ships, dropping off their catch at the mother ship for processing while sustainably recharging via solar and wind energy. And where the mother ship can transport containers and components like batteries or tanks to wind farms and platforms in leaner seasons with less catch of fish, shellfish and algae as a tender.

This is how Team 8, consisting of fisheries and merchant marine students and two teachers, saw the “Ship of the Future” at the Maritime Hackaton at the Holland Fisheries Event in Urk, the Netherlands. Seventy participants, including students and teachers from the Netherlands and Belgium as well as experts from the fishing industry, formed ten teams and sought new solutions to current challenges in the maritime fisheries sector during this three-day hack in early October.

Team 8, consisting of Thomas Koffeman, Harm de Boer, Maarten van Slooten, Kevin Visser and teachers Klaas Zwaan and Pieter ten Napel, won and received the incentive prize of 500 euros, presented by ABN Amro. Not a lot of money, concurs Geert Hoekstra, organiser and practor fisheries, innovation & entrepreneurship at ROC Friese Poort (practors operate as mediators conducting and linking research with education practice). ‘The incentive prize adds a competitive element to the hackathon, but on 4 November, two teams already visited Padmos Shipyards for a tour and 3D modelling of their design to see how their idea will be followed up. Parties such as banks, financial advisers and maritime suppliers are keen to be involved in a follow-up.’

A hackathon comes from the IT world. It is a compound of “marathon” and “hack”. A hackathon is like a pressure cooker, where participants work together over a short period of time to tackle an urgent problem. Teams search for new solutions, with each team member contributing creative ideas and solutions from their own background and expertise. More information can be found on the Farmhack website. The aftermovie of the contest can be watched below.

Dutch fisheries are looking for solutions to problems such as the pulse ban, the Brexit, offshore wind farms and high fuel prices since the war in Ukraine. Wageningen Economic Research recently presented the hard facts. In the first eight months of 2022, the Dutch fisheries made losses of EUR 20 to 30 million. About twenty per cent of the Dutch fleet applied for restructuring since 1 September.

This calls for steps towards future-proof fishing and sustainable food extraction in the North Sea. Not only by companies and governments, but also by (vocational) education. In the Netherlands and Belgium, young people and adults are being trained for a profession at sea. But is there a future for them?

If so many ships are being decommissioned, what do crews face? Hoekstra: ‘That is the 100,000-euro question: what should current fishermen bet on for a profitable earning model and space at sea? Crew members of decommissioned vessels already often join cutter owners who do continue. For example, the largest shipping company in number of Dutch-flagged cutters is not going to restructure and has a crew shortage. I also expect outflow of fishermen to inland or ocean shipping and to maritime suppliers, such as technical cooperatives.’

‘Those who continue to fish will have to rely on fishing grounds further offshore, where there are no wind farms. It is also conceivable for fishermen to become co-users in wind farms with passive and small-scale fishing, provided legislation allows it. The government makes area passports that describe what is allowed on an experimental basis for food extraction and co-use within wind farms. The coming years should prove whether this can be a revenue model for fishermen. But all this is still difficult legally.’

A five-member jury judged the three-minute presentations. The jury consisted of Arie Mol (RVO, Fisheries Innovation Network), Marloes Kraan (Wageningen University & Research), Jacob Brands (fisherman and owner of a North Sea cutter), Pieter Kaptein (ROC Friese Poort Urk) and Eric Boogaard (NGO ProSea Marine Education). The jury emphatically called for more teams to strengthen each other into one umbrella concept. Together with these teams, the organisation, together with business, education and government, will take a closer look at how the innovative ideas can be followed up.

The Maritime Hackathon was the first hackathon in the Netherlands from maritime mbo (post-secondary vocational) education. Organisers were ROC Friese Poort Urk and Wageningen University & Research. Over three days, young fishermen set to work on issues such as new fishing techniques (now that pulse fishing has been banned), demand-driven response to the market by involving consumers more closely in food from the sea, how and which food to harvest from the sea with simultaneous nature enhancement, data on board (fishing for data with valuable measurements under and above water) and the ship of the future.

For the event, five challenges were presented by shipyard Padmos, Wageningen Marine Research, Good Fish together with young fisherman Hendrik Kramer of Masterplan Duurzame Visserij (Masterplan Sustainable Fishing), Omni-C in combination with Weforsea Shipping and Foundation De Noordzee. The ten teams got to test their creativity on 6 and 7 October and presented their solutions on 8 October at the Holland Fisheries Event.

Besides the winners, team 1 came up with an idea aimed at catching sole, plaice and/or grey shrimp without bottom disturbance and with minimal fuel consumption. Hoekstra: ‘They came up with a technique of passive fishing that is applicable both inside and outside wind farms.’

‘Team 4+5 devised a revenue model for bringing in valuable data with smart sensors on cutters. Surveys at sea with sounding boats are in fact very expensive. While fishermen can measure them with sensors in addition to fishing. Besides, that data can contribute to valuable insights like fuel consumption and catchability of fish species per area, making fishing more cost-efficient.’

‘Team 3 came up with the idea of a cooperative in which fishermen can deliver directly to the end buyer locally with a quality mark to ensure freshness and quality. Normally, the buyer at a fish auction does not know whether a fish was caught one or two days earlier when landed. With this idea, freshness and quality can be proven through a transparent process with a scale and automatic registration on board. It also allows better response to demand from shore by allowing the fisherman to easily share daily information digitally on catch composition, quality and expected time of landing.’

‘Finally, team 10 had devised a trimaran, which allows the fishing vessel to save a lot of energy through a combination of electric propulsion and wind as propulsion.’

Curious about what else Dutch maritime education is working on? The January 2023 issue of SWZ|Maritime is dedicated to education and will highlight additional interesting projects.

Searching for an umbrella concept

According to Hoekstra, the creators of the challenges were very curious to see what students could come up with in a short time. ‘Of course, existing ideas were also suggested and some ideas can still be refined. But the challengers thought the approach to think differently and future-oriented from education by working in teams as a kind of start-up was very successful. As an organisation, we are going to hold a reunion for the teams that want to do so, in which we will try to link those teams that can strengthen each other to create an umbrella concept for a fishing vessel that has a future-proof fishing technique and can fish more energy-efficiently and can collect and apply smart data and has a sound earnings model.’

Picture: The hackaton’s winning concept; a satellite mothership. Below right, the team with practor Geert Hoekstra second from right.

Watch an aftermovie of the Hackathon below.