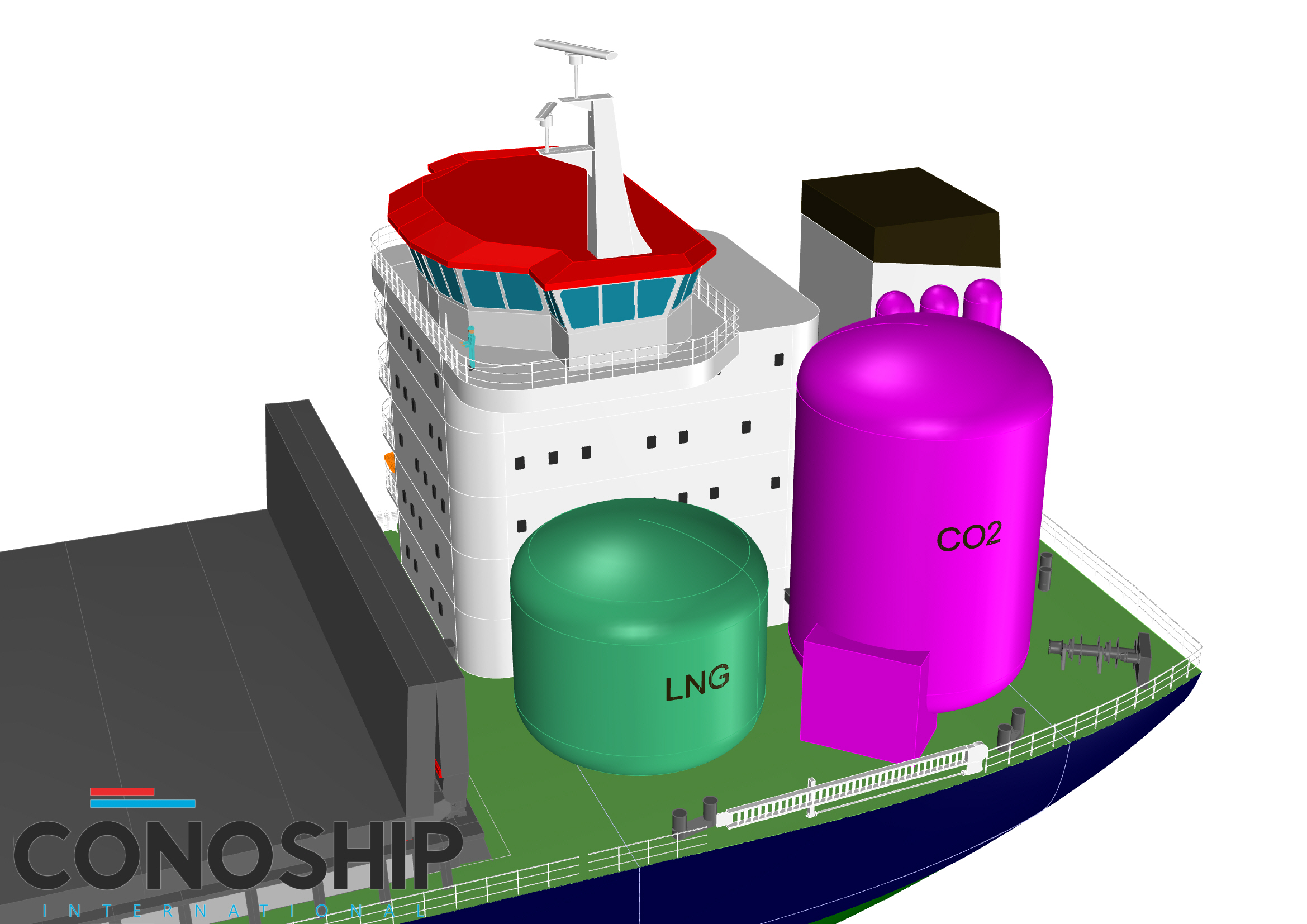 Contrary to the World Bank point of view, Conoship believes there is a bright future for LNG in the decarbonisation of the shipping industry. The ship design company states the World Bank report seems to have missed an important recent technical development: marine carbon capture systems.

In its report, the World Bank said it saw only a limited role for LNG in the decarbonisation of the shipping sector. Conoship disagrees and points out that recently, great progress has been achieved regarding the capturing of CO2 from the exhaust of LNG-fuelled ships. It points to R&D projects in the Netherlands by Conoship, TNO Delft and other partners among others that lead to feasible and practical ship-based solutions. These solutions utilise “the cold” of the LNG (-160 dgr. C) to liquefy the CO2 and store it in regular liquid CO2 tankcontainers on board.

The captured CO2 can be unloaded while bunkering LNG, to be stored for example offshore in empty gas fields, for which infrastructure is under development in Norway (Northern Lights), Rotterdam (Porthos), Amsterdam (Athos) and by parties like CarbonCollectors.

The ship designer points out that the same ships that actually are fuelled by LNG (= about 85 per cent methane CH4), can be fuelled in the future by liquified synthetic-methane (LSM, 100 per cent CH4), using the same existing LNG infrastructure. A closed carbon-loop can be realised by capturing the CO2 after the combustion of LSM in the ship, liquefying it and providing it as feedstock to the producer of the LSM.

Conoship R&D and design studies are said to show that by future application of onboard CO2-capturing, liquefaction and storage, LNG-driven ships can be a good direct economic and ecological alternative to diesel-driven ships, realising large reductions of SOx, NOx en PM/Sooth and smaller reductions of CO2. In addition, Conoship says it is a good future-proof economic and ecological solution, increasing the reduction of CO2-emissions (possibly stepwise) to the desired economical and ecological level by application of a CO2-capturing installation.

By integrating the CO2-capturing installation in the initial ship design, it is possible to reduce the future impact of the modification. However, CCS installations are also suitable for retrofits on board of LNG powered vessels, says Conoship.

Further, R&D on handling the challenge of methane slip is making good progress, both in combustion technology in engines and in after-treatment technology and there is no reason why application of the solutions should be limited to a fraction of the fleet.

Furthermore, despite all developments, the quantity of “green hydrogen”, either to be used directly as fuel, or as feedstock for e-fuels, will remain limited. According to Conoship, it would make sense to use this scarce quantity for applications for which there are no alternatives, such as in long range aviation.

Introduction, through IMO, of a CO2 levy per tonne emitted CO2 will facilitate the economical application of CO2-capturing installations on LNG-driven vessels in the coming years. All in all, LNG, when combined with CCS, should therefore still be considered as a more than valuable transition fuel up to 2050, says Conoship, reducing the carbon footprint of shipping and its customers with more than 75 per cent compared to today’s diesel powered operations.