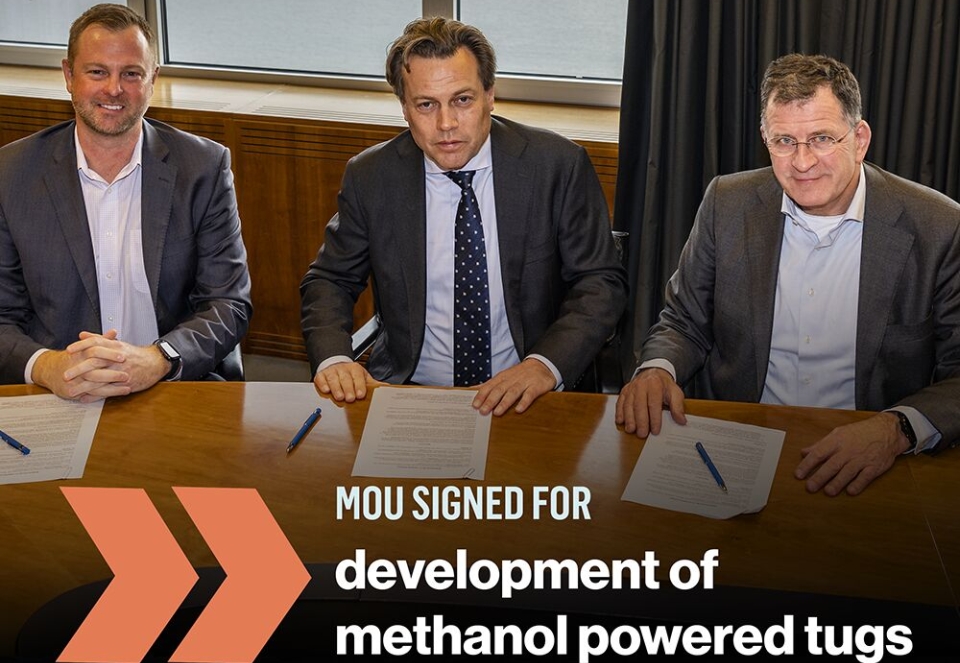 Damen Shipyards, Caterpillar Inc. and Pon Power have signed a Memorandum of Understanding (MoU) for the joint development of a series of dual-fuel methanol/diesel-powered tugs. The aim is to have the vessels series production-ready in 2026.

The Dutch shipbuilder wants to be able to offer both zero-emission electric and carbon neutral methanol powered tugboats.

Electrically powered tugs are ideal for zero-emission operations in harbours and terminals where low-cost electricity can be easily accessed between assignments via onshore infrastructure. With its greater energy density than batteries, methanol delivers increased energy storage capacity, making it suited for longer duration operations.

Methanol has been selected as an environmentally friendly alternative to diesel because of its important role in the energy transition within the shipping industry. No sulphur oxides or particulate matter are released during combustion and the use of green methanol significantly reduces CO2 emissions. By combining the knowledge and expertise of Damen Shipyards, Caterpillar Inc and Pon Power, the development of methanol-powered ships is gaining momentum.

The goal of this collaboration is to jointly develop knowledge and learn how (green) methanol can be optimised as a fuel for ships, including bunkering, storage, handling and power density. A team of experts from Caterpillar Inc and Pon Power will support Damen during engineering, installation, commissioning and testing of Caterpillar’s methanol powertrain in the purpose-built Damen vessels.

The methanol ready CAT 3500E series dual-fuel methanol pilot engines will be delivered to Damen by Pon Power in 2024, when the process of integration and testing will begin. This will be a complex undertaking involving integrating the engines with all aspects of the ship’s control, monitoring, ventilation and other systems and will take place in close cooperation with the classification societies.