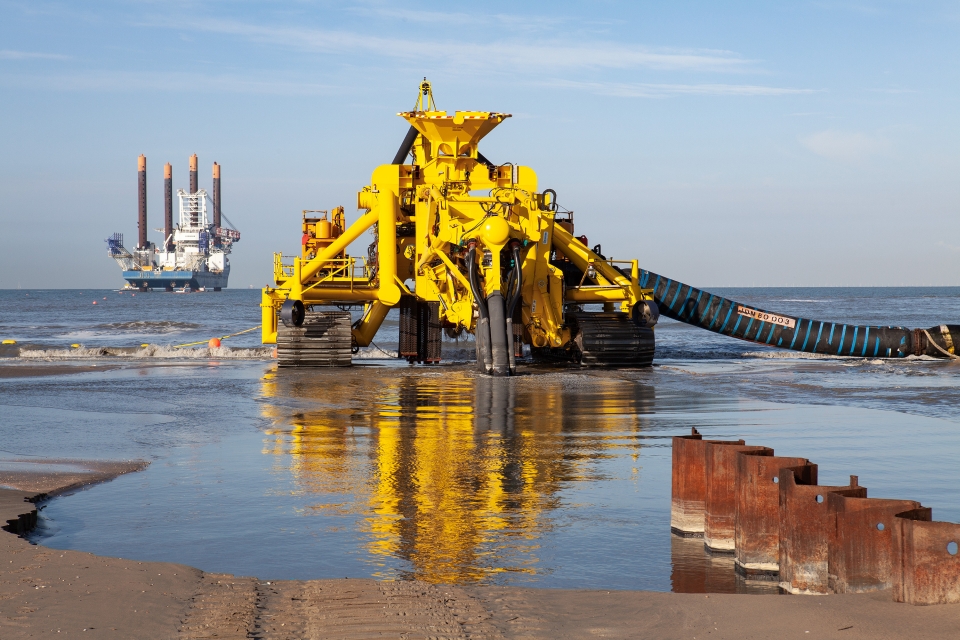 Jan De Nul Group has completed the first part of the cable installation works to connect the wind farms Hollandse Kust (noord) and (west Alpha) to the Dutch mainland. In addition, the Belgian maritime contractor signed a contract with Global Marine Systems Ltd. for the acquisition of the offshore support vessel (OSV) Global Symphony.

The cable installation vessel Isaac Newton installed the cables on the seabed. In addition, Jan De Nul used several remote-controlled underwater trenchers and amphibious cranes in the surf zone to bury and protect the cable in the seabed. The Moonfish (picture top) is one of these trenchers, a Jan De Nul design tailored to the needs of this project.

In the spring, the cable installation vessel Isaac Newton collected the first lot of 90 kilometres of sea cable from consortium partner LS Cable & System in South Korea. After arriving in the Netherlands, the Isaac Newton installed four different sea cables, starting from the beach.

Two cables were laid in one length on the seabed, all the way to the transformer station of Hollandse Kust (noord). For the connection to the transformer station of Hollandse Kust (west Alpha), the Isaac Newton installed the first 8 kilometres of both sea cables, starting from the beach. Next, the trencher Moonfish set to work, burying and protecting the sea cables in the seabed.

In the first phase, the Moonfish buried the first section of the two Hollandse Kust (noord) sea cables in the seabed, from the beach up to 3 kilometres offshore, at a depth of about 6 to 8 metres. From three kilometres offshore, the submarine vehicle UTV1200 took over, laying the cable up to the transformer station. This ‘offshore socket’ is located 18 kilometres off the Dutch coast.

After the summer high season, in October, Jan De Nul completed this first installation campaign by burying the two cable sections for Hollandse Kust (west Alpha) from the beach up to 3 kilometres offshore.

The Moonfish on wide tracks has been designed and made to lay cables underwater, up to 35 metres deep. With its long metal sword and powerful water jets, the Moonfish buries the cables in the seabed.

A floating water pipe pumps water to the powerful water jets on the Moonfish’s long metal sword. With this, the Moonfish makes a deep trench in the seabed, where it simultaneously lays the cable at a depth of up to 8 metres. The trench is then immediately backfilled. As a result, the cables are safely protected against future coastal erosion.

Ward Mertens, Project Manager for Jan De Nul Group: ‘Preparations started this year on the 1st March, immediately after the storm season. Our daughter company Soetaert installed four long cofferdams for the sea cable’s reception pits. Simultaneously, we dredged away the sand dunes just off the coast to clear the path for the Moonfish. The Moonfish set to work at the end of May. Controlled from the jack-up installation vessel just off the coast, the machine drove up to the beach. With the onset of a beautiful sunset, the machine got moving for the first time and buried the first sea cable at a depth of 8 metres. A fantastic moment after almost two years of engineering!’

In total, Jan De Nul is installing four sea cables in three installation campaigns. These sea cables will connect the transformer stations of the two wind farms Hollandse Kust (noord) and (west Alpha) to the mainland. Each transformer station will receive two cables, all together accounting for a total cable length of 235 kilometres. The second and third installation campaign will take place in the first half of 2023.

Jan De Nul still needs to install two more cable sections to connect the future wind farm Hollandse Kust (West Alpha) to the grid. Jan De Nul’s cable installation vessel Connector will collect the first in South Korea, transport it to the Netherlands and then install it. The Isaac Newton will again be deployed for transporting and installing the final sea cable section.

Built in 2011, the Symphony has an extensive 1400 m² deck space and is amongst others equipped with two 150 HP work class remotely operated vehicle (ROV) systems and a 150-tonne AHC crane. Thanks to the design of the vessel, the Symphony can operate in higher sea states.

The Symphony will predominantly be used to support cable installation activities and will operate as a dedicated Trenching Support Vessel. Jan De Nul’s recently delivered state-of-the-art newbuilt trencher Swordfish will be installed on board of the Symphony by the first quarter of 2023.

Picture (top): The trencher Moonfish buries the sea cables, starting on the beach up to 5 kilometres off the coast. In the background, Jan De Nul’s jack-up installation vessel Vole au vent, from where the Moonfish was remotely controlled (picture: Jorrit ‘t Hoen).