Scrap metal causes fire while being loaded on board ship 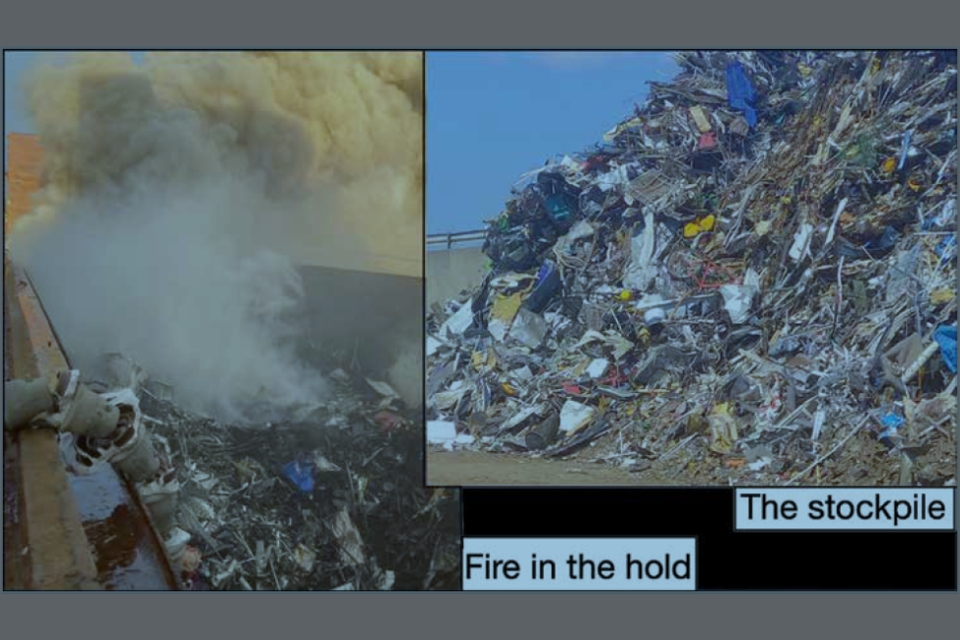 Despite that flammable refuse was mixed in with a load of scrap metal, which was easy to spot, the fire hazard went unnoticed by the crew of a general cargo vessel and they proceeded to load. This resulted in a fire in the hold that took twelve hours to extinguish.

A general cargo vessel was loading scrap metal using a shore grab. Although the cargo declaration specified “scrap metal”, in practice there were other elements of refuse in the scrap metal stockpile such as old car tires, wood, foam plastic and other plastic materials and containers with small amounts of flammable liquid. The export company stated that the scrap metal cargo was allowed to contain five per cent by weight of material that was not metal waste, but also was not hazardous waste.

As loading progressed, smoke was seen coming from the cargo hold. After a short period, the smoke intensity increased and the loading was stopped. Port staff called the municipal fire service. Meanwhile, the ship’s crew were preparing their own hoses. The smoke intensity continued to increase and a nearby shipyard located downwind had to be evacuated.

At this point, about 500 tonnes of metal waste had already been loaded. There was no fixed extinguishing system in the hold and the master did not want excessive water in the hold because it could cause the vessel to become unstable. It was decided that the cargo would be unloaded and extinguished on the quay. However, the unloading operation had to be interrupted because the crane operator judged that the crane could be damaged from the heat of the fire.

The hold was scanned with a thermal camera, which showed that the fire was still burning. Various extinguishing methods were discussed, including filling the hold with foam. After some stability calculations, the vessel was trimmed so that the water could collect in the forward part of the hold, which was empty. The excess water was then pumped off the vessel and collected in tanks to be carried away for decontamination.

It took almost twelve hours to extinguish the fire, although in the end only minor damage was suffered.

The investigation found that the fire was probably caused by sparks or frictional heat generated during loading, which then ignited flammable liquid or other flammable material within the load of scrap metal.

The investigation concluded that management practices in regard to the scrap metal were less than adequate. In particular, the risks of handling metal waste mixed with combustible material had not been adequately assessed.

Also read: How a fire resulted in the total loss of car carrier Höegh Xiamen